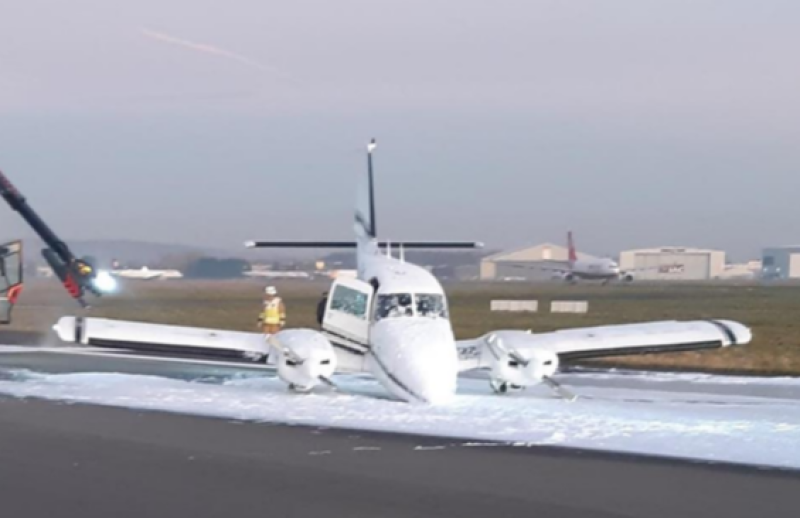 A REPORT into a plane crash at Shannon Airport in 2019 has revealed the incident happened after the aircraft's landing gear "collapsed".

Air Accident Investigation Unit Ireland have released their report into the incident which happened on Runway 24 on December 2, 2019.

The PA23 plane sustained substantial damage in the incident although the pilot escaped without injury.

The nose landing gear of the aircraft collapsed, which caused the plane's two propellers to strike the runway.

The pilot, who had 284 hours of flying experience at the time, was the only occupant of the aircraft.

The plane was manufactured in 1979 and had recently undergone extensive maintenance.

On the day of the flight, the bulb was removed from the nose landing gear indication light assembly to facilitate a voltage check.

The 36 year-old pilot left Shannon Airport for Kerry once the bulb had been replaced and the green light was on as expected.

The pilot noted that on his approach to Kerry Airport the three green landing gear indication lights illuminated but the light for the nose landing gear was flickering.

On his approach back to Shannon, the pilot reported that all three green gear-down indication lights illuminated, however when the aircraft was at an altitude of 700ft, the indication light for the nose landing gear started to flicker.

He said he continued with the approach, as he considered that the indications were the same as those he had observed on the aircraft’s previous flight and that the aircraft had landed normally following that flight.

As he reduced the engine power for landing the aircraft’s red landing gear warning light illuminated and the aural alert sounded, indicating that all landing gears were not down and correctly locked.

At that stage the aircraft's main wheels were on the runway and it was too late to abort the landing, the pilot felt the nose landing gear collapsing and the propellers struck the runway.

The aircraft came to a rest at the side of the runway and the Shannon Airport Fire and Rescue Service attended the scene.

The report stated that the cause of the crash was that the nose landing gear was not locked in the down position at the time of landing.

The subsequent repairs to the aircraft were delayed due to the Covid-19 pandemic, and the aircraft did not return to service following the incident until November 2021.