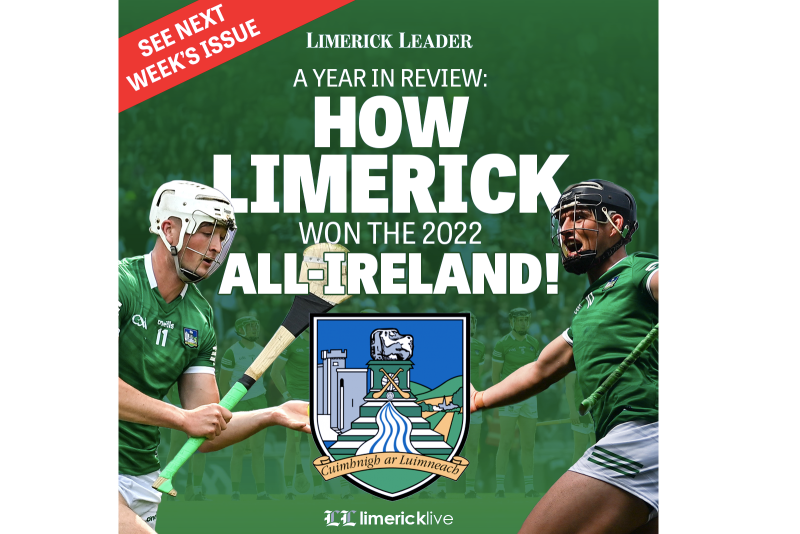 Coming next week! A special Year in Review

WITH hurling fans across the city and county and around the globe still basking in the afterglow of the Limerick hurlers’ dazzling All-Ireland win, the Limerick Leader team are preparing to give those same loyal fans something special to feast on next week.

After what has been a truly momentous year for the team and their supporters, culminating in an historic three in-a-row, next week’s edition of the broadsheet paper will include a special feature dedicated to this team’s remarkable season.

The celebration souvenir 'A Year In Review: How Limerick Won The 2022 All-Ireland' will take readers on a journey from the Treaty men’s first game of the Championship against the Rebels in their backyard, to the Munster final Thurles thriller, and then on to Croke Park for Limerick’s scintillating performance in overcoming the Cats to once again reach the Holy Grail.

A souvenir supplement 'A Year in Review: How Limerick Won the 2022 All-Ireland'

A FREE glossy double-sided poster of the triumphant team

In the Leader out Wed, July 27 pic.twitter.com/xPqfS0qR6z

There will be pictures, news and reviews of key moments making this a not-to-be missed publication.

And, to top it off, readers will get a double-sided glossy poster free with the paper, featuring the triumphant Limerick team.

Don’t miss this souvenir special in next week’s Limerick Leader, in shops from Wednesday, July 27.