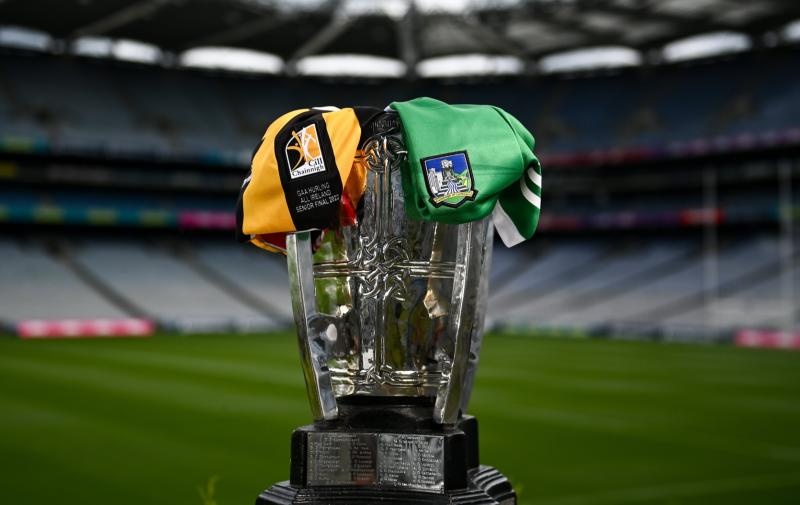 Who will win the Liam MacCarthy cup later today. Thrown in at Croke Park is at 3.30pm | PICTURE: Sportsfile

ALL ROADS lead to Croke Park this Sunday as Limerick bid to win the Liam MacCarthy cup for the third year in-a-row.

From Abbeyfeale to Corbally, from Kilbehenny to Castleconnell, and everywhere in-between, green flags are flying proudly across communities, amid huge hopes that John Kiely’s Limerick team can beat Brian Cody’s Kilkenny side and continue on their bid to emulate the Cats' four straight titles.

As well as flags and bunting flying, there are some fantastic displays on show in Limerick.

In Grange, the Dalys are causing motorists to beep horns and stop for photos. Their straw-stuffed mannequins in the leaba with a sign reading ‘Make room in the bed for Liam’  has captured the public’s imagination no end.

Meanwhile, Bruff dairy farmer Roger Mulqueen has taken inspiration from Bill Murray and the JP McManus Pro-am with his brilliant 'Catbusters’  instead of Ghostbusters installation.

And in the city, Rhebogue has gone green, as members of one of the area’s oldest GAA clubs St Patrick’s pay tribute to former hurler of the year, Gearoid Hegarty who is set for a shot at glory come Sunday, throw in 3.30pm.

Meanwhile, another famous old club, Patrickswell GAA – who count in their number Cian Lynch, Diarmaid Byrnes and Aaron Gillane – featured on RTÉ’s Up for the Match which made a return last night for the first time since Covid.

As usual, tickets for the decider at headquarters are like gold-dust and transport from Limerick to Dublin is at a premium, with trains fully booked, and only limited availability in terms of coach travel and hotel rooms.

Opinion: 'I envisage one ferocious battle at Croker on Sunday' - Shane Dowling

While more than 84,000 people will be in Croke Park for throw-in, thousands more will gather at TUS Gaelic Grounds where the match will be shown in a big screen - gates for the family-friendly event open at 2pm.

With temperatures here and in Dublin set to 30 degrees, it has the makings of a glorious day for the Treatymen!

Stay tuned to limericklive.ie and our social media platforms across the day as we report on proceedings on and off the pitch.

This afternoon's All-Ireland final will be broadcast on RTÉ One television and Sky Sports Arena.

There will be live radio coverage on RTÉ Radio 1 and Live 95.