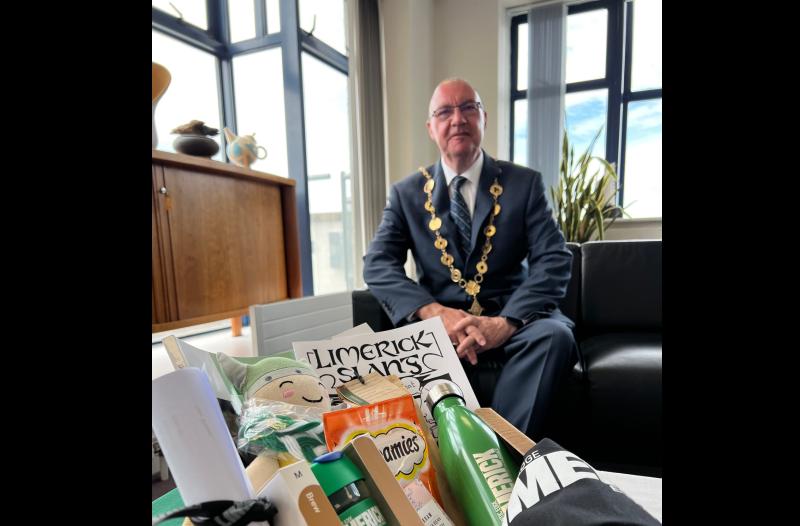 NEWLY elected Mayor of the City and County of Limerick, Cllr Francis Foley, has issued a warm invitation to his Kilkenny counterpart to visit the city on Monday night.

Mayor Foley is reaching out across the sporting divide by sending Mayor of Kilkenny City Cllr David Fitzgerald a "therapy hamper" ahead of the All-Ireland final. It is a mix that includes 11 Limerick gifts as part of the council's Limerick 11 Summer 2022 tourism campaign to get him through the tension of the weekend ahead.

The campaign marks the city’s 11 centuries and top of the goodie bag for Cllr Fitzgerald is an invitation to Limerick on Monday night next when, as Mayor Foley writes in his accompanying note, "We’re very confident Limerick will be absolutely buzzing".

To know more about Limerick 11 Summer 2022, see video here or the website.

The jousting follows on from last year interactions between the Mayors of Limerick and Cork. The then Lord Mayor of Cork, Cllr Colm Kelleher sent a cheeky email to former Mayor Daniel Butler calling for the return of the Liam MacCarthy Cup to the Rebel county "where it belongs".

Mayor Butler said he would arrange for Lord Mayor Kelleher to get a glimpse of Liam in Croke Park before it returned to Limerick.

This time the Mayor of the City and County of Limerick has fired the first shot.

"One of the things we’re proud to be known for is that we are a caring people and, with that in mind, we have put this hamper together; call it a ‘therapy hamper’.

"We’re conscious of the tension in the build up to and during Sunday’s game; the unfortunate but, we feel, unavoidable come-down you will have; and the need for a pick-me up afterwards. So, we’re endeavouring to cater for all of this in our 11 item hamper to celebrate Limerick 11 Summer 2022, which is turning out to be a special summer indeed," wrote Mayor Foley with pen firmly in cheek.

The hamper includes Back 2 Back, a photographic profile of Limerick’s two-in-a-row, 2020 and 2021, with the mayor suggesting in his letter that that "an update on the book will surely be underway come Sunday evening but that there is still so much in this prequel to enjoy”.

Also included is a Limerick cup and locally roasted coffee blend, Limerick chocolate and a Viking mascot bearing a Limerick green crown. Limerick Slang, a compiled and illustrated book by Hugh McMahon is in the packed hamper as well.

"This will enable you to interpret where you, the ref and the officials, stand with us at various stages during the game," Mayor Foley wrote.

To top it off, the hamper also includes a pack of Dreamies - cat treats!

"So, after all that, please enjoy the game and see you perhaps Monday night here in Limerick," Mayor Foley concluded.