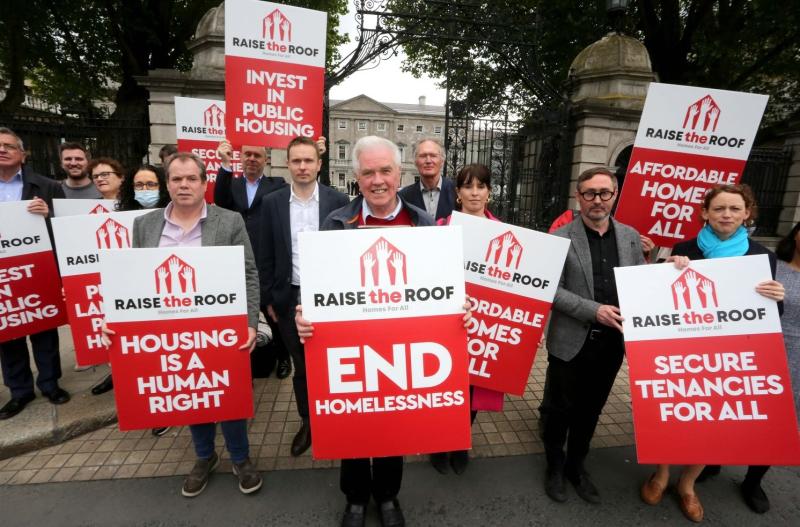 The regional March for Housing events were launched outside Leinster House

PEOPLE are being urged to take to the streets of Limerick this coming weekend to demand action on the housing crisis.

The Raise the Roof coalition has announced details of the March for Housing event which will take place at lunchtime on Saturday..

The recent launch of the Raise the Roof campaign in Limerick saw over 100 people show up to speak out about the scale of the housing crisis across the city and county.

The campaign involves trade unions, students unions, housing charities and opposition parties, and they are encouraging "all those who fed up of the government inaction on the housing crisis to join us".

Cian Prendiville, Limerick spokesperson for the Raise the Roof campaign, says solutions are being put forward but the government simply won't listen.

"We know that a rent freeze and ban on evictions is possible, and can work. We saw that over Covid. We know there is enough public land to build enough homes to clear the housing waiting list, and tens of thousand of vacant houses that could be renovated as public housing. We know this crisis can be solved - but we also know the government won't do it without a fight. That's why we need people to take to the streets, like we did with water charges," he said.

SIPTU representative Arek Muszynski, who is a coordinator of next weekend's protest, added: “We refuse to accept that homelessness is the new normal. We refuse to accept that whole generations will have nothing to aspire to, as they are priced out of the market. This is a political issue, caused by decades of political failures. However, we have the key to changing this mess and Raise the Roof Campaign is leading the change."

Those attending next Saturday's march are being advised to assemble at Bedford Row at 1pm.