In Madison’s memory: Cycling novices to pedal from Limerick to Crumlin 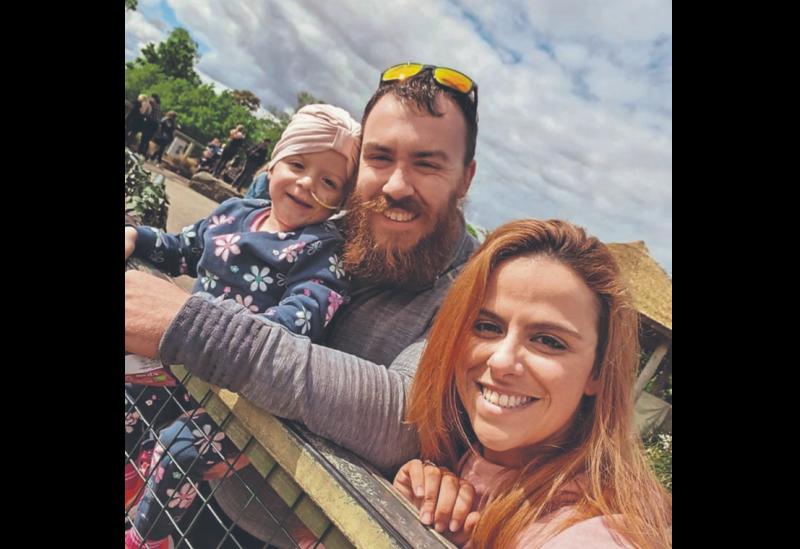 Bravery personified: Madison Stanley, daughter of Shane and Rebecca, ‘never lost her sparkle’ throughout her treatment

TWO friends will cycle to Dublin in memory of a little girl who “never lost her sparkle” while battling a rare form of cancer.

Madison Stanley, aged 3, of Corbally, passed away in April. The daughter of Shane and Rebecca touched so many lives - family, friends, staff in St Johns Ward in Crumlin Children’s Hospital - during her all too short life.

Sean Hynan, a good friend of Shane’s from Cratloe, came up with the idea of cycling from Corbally to Crumlin to honour Madison and raise funds for Aoibheann’s Pink Tie charity.

It is sadly a journey that Madison, Rebecca and Shane made countless times since the three-year-old was diagnosed in March of 2021.

The inexperienced cyclists - Shane hasn’t been on a bike since he was a teenager - takes place on July 23.

A fundraising day will take place in Squire McGuire’s on Sunday, July 10 from 4pm with bands, DJs, finger food and raffle - click here to donate.

“No matter what we go through on the day of the cycle it is nothing compared to what she went through,” said Shane.

Throughout her treatment he said Madison “never lost her sparkle”.

“She was phenomenal throughout this. It was her way or the highway - even with the nurses, doctors, consultants. She was the boss and throughout everything she went through she never lost her light. She was always energetic, always happy. She was stubborn, bright and happy. She really is amazing,” said Shane.

Helping to support the family was Aoibheann’s Pink Tie. It was set up in 2010 by Mick Rochford and Jimmy Norman after the tragic loss of Jimmy’s daughter Aoibheann to cancer aged just eight. The men wore pink ties at the funeral which was Aoibheann’s favourite colour. Mourners at Madison’s funeral also wore bright colours.

“We wanted everything to sparkle like she did,” said Shane. Aoibheann’s Pink Tie paid for the family’s hotel stays while Madison was undergoing a myriad of scans, tests and treatments in Crumlin.

“It removed a lot of financial burden. As stressful as life was it took some of the stress away. Without Aoibheann’s Pink Tie we wouldn’t have got through the last year and a half. Madison loved the hotel stays. It made it like a little holiday for her. It took the sting out of the hospital visit. They spend €12,000 a month on hotels looking after families like us. They have also started giving fuel vouchers,” said Shane.

He and Sean - friends for years after both working in city bars and nightclubs - want to raise as much money for Aoibheann’s Pink Tie as possible to support families who travel to Crumlin.

They are receiving expert training from Liam Kennedy of The Hub Bike for Life in Coonagh Cross Shopping Centre.

“They have been absolutely brilliant. They have given us the bikes and gear. Liam Kennedy is training us and will cycle with us. They will have their support van driving behind us in case of punctures,” said Sean.

Generally, people starting cycling go from couch to 50k in eight weeks but they are going from couch to 200km in four weeks. When the going gets tough the only motivation they will need is Madison.

Shane and Sean wish to thank the amazing staff in St John’s Ward in Crumlin, Aoibheann’s Pink Tie, The Hub and everybody who has donated thus far especially in light of the financial pressures people are under.