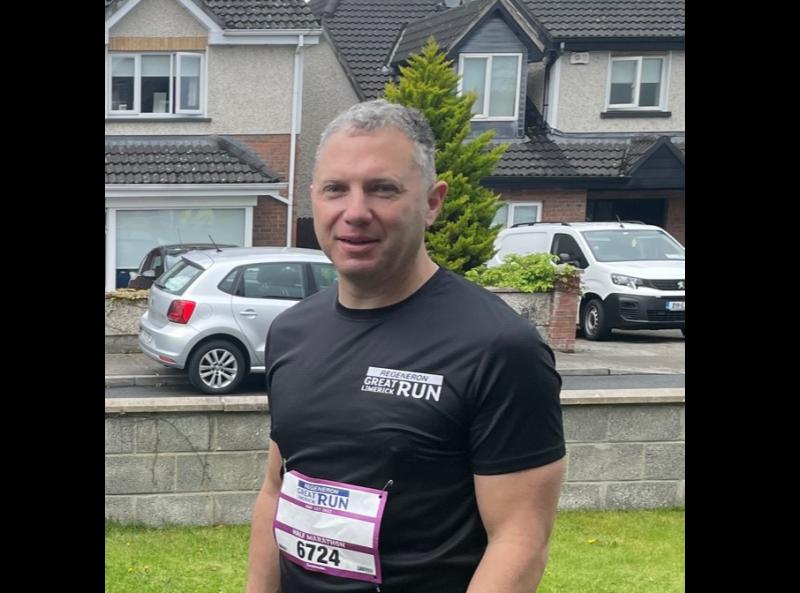 A LIMERICK solicitor is lacing up his trainers in preparation for running 10kms in each of the 32 counties of Ireland this July.

Jerry Twomey, aged 50, of the Father Russell Road, Limerick city is embarking on the unique challenge to raise awareness and funds for the Irish Motor Neurone Disease Association (IMNDA).

And to honour the memory of his father John, who died from the disease in 2010.

“We met angels and helpers in many forms while dad suffered his illness with dignity. The IMNDA was of immeasurable support to us and are an endlessly worthy charity to go the distance for.

“I have been training hard since January and at times I felt that completing this challenge is way beyond me. But what better way to honour the memory of my brilliant dad than to face a challenge bigger than I feel possible. I also wanted to do something in every county in Ireland in support of everyone who is, or has been, affected by this devastating disease,” said Jerry, who is a partner in Frances Twomey & Co Solicitors.

There is one particular poignant memory that he wants to help repay. As Jerry’s father became weaker from the progressive neurological condition the family were told they needed a hoist.

“We found out that one costs €10,000. I contacted the IMNDA to see if we could borrow or rent one. They said they would love to help but they didn’t have a penny at the time. Two days later they rang us to say that somebody had done some fundraising and made a donation. They said a hoist was on its way to us. That is the moment I am trying to repay,” said Jerry, who is married to Anita and they have three sons - Seán, aged 21, Cillian, 20, and Eunan, 17.

He has already raised €27,000 for the charity from swimming 100 lengths of the pool in UL and running from his dad’s native Tramore to Raheen in previous years. The solicitor has banked 750kms in training since January and is now ready for road.

Jerry has set up a fundraising page to support the campaign and updates will be posted on both Instagram and Twitter.

Throughout this month, Jerry plans to travel to further away counties at the weekends to complete 10km runs there and dip in and out of neighbouring counties during the week.

He is reaching out to everyone in the Motor Neurone Disease family, and also sports clubs, running clubs, and social groups to join him along the way, in their runners or on their bikes.

“With company the run feels half as long and twice as easy. Just get in touch and I will do my best to be there,” said Jerry.