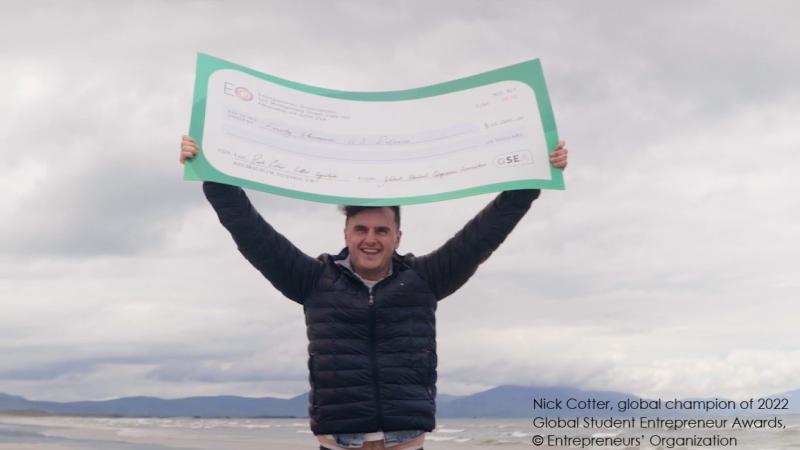 Nick Cotter, CEO and co-founder of Cotter Agritech, was one of more than 1,000 entrants

Nick Cotter, CEO and co-founder of Cotter Agritech, which specializes in targeted, selective treatment systems for sheep was one of more than 1,000 finalists in the prestigious competition.

Nick, who is from Abbeyfeale learned of his victory during the final episode of a four-part mini-series called ‘Start it Up’, which was produced by the awards programme.

GSEA is the premier global competition for students who own and operate a business while attending college or university and 2022 marks the 16th year that the Entrepreneurs’ Organization has hosted the awards.

Candidates nominate their businesses through an open application process and compete against their peers worldwide in a series of local and national competitions. For the 2021-2022 competition, 1,093 applications were received from students in 40 countries and six continents. 60 students advanced to the global finals, leading to the top six finalists.

Nick Cotter has been an entrepreneur from a young age, setting up his first business, Cotter Bros Firewood at when he was just 13.

In 2019, he set up a second business, Cotter Organic Lamb, which directly sells the award-winning, 100% grass-fed, organic lamb raised on his home farm in Abbeyfeale, to homeowners and local restaurants.

Nick, who is studying law and business studies at University College Cork, has been awarded US€40,000 to invest in his business.

"It's much more than I ever thought was possible, becoming global champion. Thank you, GSEA. For my mentor, Tyler Olson, this is for you as well. It's for all those who know who they are. Each stage of the competition is quite intense, and you hope. It's an incredible achievement and pure joy for me," said Nick after he was revealed as the winner.