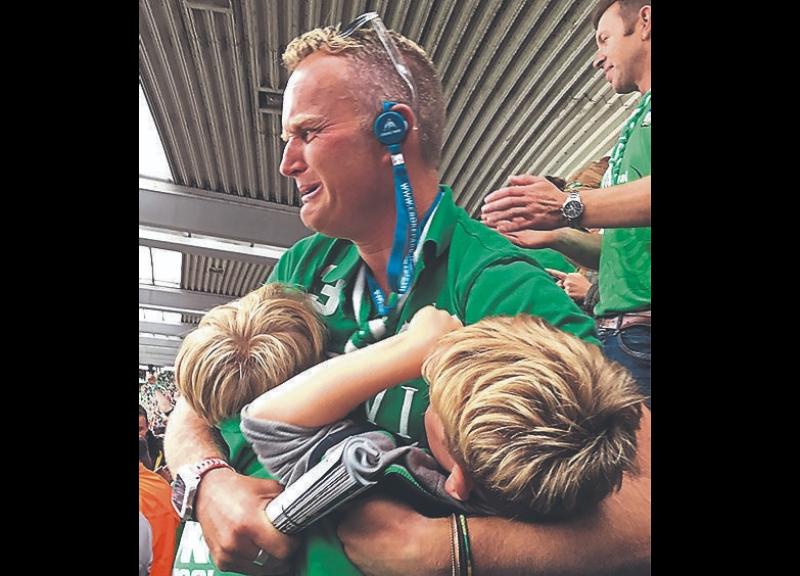 If there was one photo that captured the pure, raw, unbridled emotion at the final whistle when Limerick held on to beat Galway in the All-Ireland final in 2018 it was this one.

Darragh Moloney, Knockaderry, has his boys hugged tight to his chest. The programme in his fist is squeezed so tight it will never be flat again. The tears are a mixture of new-found pleasure and 45 years of pain. The wait for Liam MacCarthy was over.

One of the nicest things about it was that it was taken by a Galway supporter. Léan Breathnach, a daughter of the famous Seán Bán.

She snapped the pic unbeknownst to Darragh just after his clubman Tom Condon came out with the sliothar after Joe Canning’s free felt short.

This Sunday will be the first time Limerick have played Galway in the championship since 2018 with fans in attendance. Darragh, wife Michelle and their sons Cillian, aged 14, and Rían, 12 will be there.

Four years on the Leader caught up with Darragh.

“If I’m crying on Sunday it’s a disaster,” he laughed.

The photo was shared all around the world on social media and through the Leader story, and locally in Knockaderry.

“They were slagging me for months. Will you stop!” smiled Darragh.

But looking back he says it is a lovely thing to have.

“The first of anything is brilliant. I thought we were bate. I was certain we were bate. When it was nearly taken from you all you could remember is the amount of times we nearly got there.

“Seeing Tom Condon coming out with the ball was sweet,” said Darragh, who thanked Léan again for her kindness in the midst of her own disappointment.

“She is a lovely woman. A Kerry marketing company, The Brand Geeks, sent me the picture transferred onto a sheet of metal. I have it hanging in the house.

“When I am dead and gone the photo will still be there. Hopefully it won’t take another 40 years for a Limerick man to be crying with joy in Croke Park on All-Ireland final day,” said Darragh.

He compares his young sons experience of following Limerick with his own. It will resonate with many.

“They haven’t experienced the hurt. All they have seen is the glory days and the good days and victories.

“The rest of us saw nothing but misery, misfortune and struggle. Anything easily got has little value placed upon it as the saying goes,” said Darragh.

And the value of that All-Ireland win in 2018 was priceless. Fans couldn’t dream then that two more would follow in 2020, 2021 and Limerick now go for a three-in-a-row.

“They’re a special bunch of men,” said Darragh. And let’s hope the tears of joy haven’t dried up just yet.