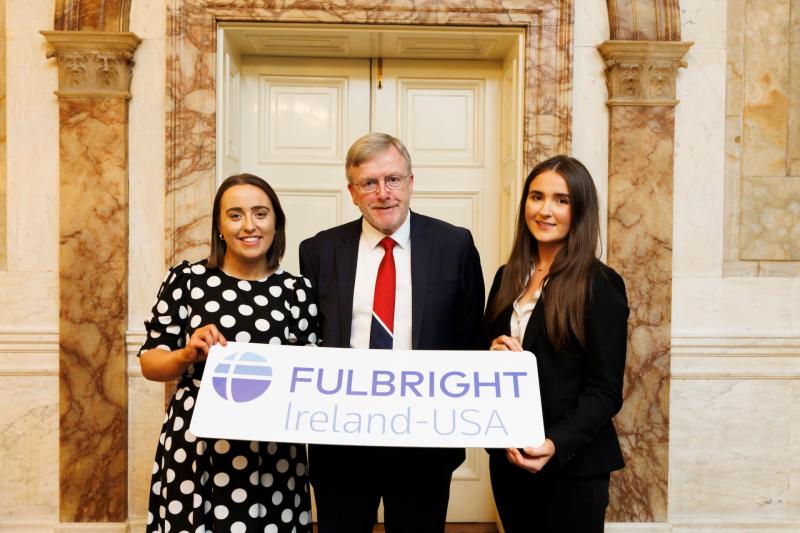 A POSTGRADUATE student from Mary Immaculate College and a recent graduate have both been awarded a scholarship from the Fulbright Commission to study in America in recognition of their excellence in academia.

The Fulbright Programme was established in 1946 and has been annually awarding Irish-US exchange scholarships for sixty-five years.

Eilís Ní Iarlaithe is a native Irish speaker from Baile Mhúirne in the Múscraí Gaeltacht. Eilís completed a Bachelor of Education with a specialism in the Irish arts in Mary Immaculate College in 2016. As a Fulbright FLTA, Eilís will teach the Irish language and take classes at the University of Montana.

Also awarded a Fulbright FTLA was Eimear Millane, who is currently teaching in County Kildare.

Eimear holds a Bachelor of Education degree from MIC and is currently undertaking a Masters in Literacy and the Curriculum in St Mary’s University, Belfast.

She will be a FLTA to the University of Connecticut.

Professor Michael Healy, Vice-President of Research at MIC, has congratulated both women.

“I wish to congratulate Eilís and Eimear on being awarded a Fulbright scholarship and I wish them both every success in their time in Montana and Connecticut. The Fulbright Awards are highly competitive and awarded only to those who have demonstrated excellence in research and study, and is further evidence of the rising profile of research and scholarship at MIC, a development which the College takes much pride in,” he said.