There is nobody like Van the Man! Limerick DJ explains his 50-year love affair with Van Morrison 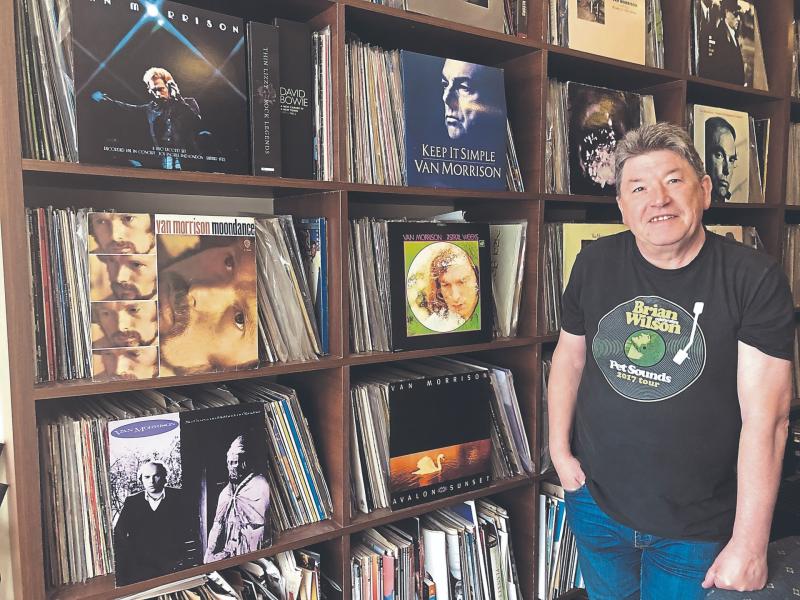 LIKE all good journeys this one began back in the winter of 1972 in Savins music store in Limerick.

I watched in admiration and envy as my older peers strutted back from town with their records under their arms.

Although only five years older than me at the time, they seemed so much bigger and almost another lifetime away from me as a 12-year-old schoolboy. They were buying records and they were cool.

Every Saturday us younger guys would sit on the wall at the top of our road in Farranshone, and wait for the older boys to come our way as they arrived home from town with their music purchases under their arms and we plucked up the courage to ask them what they had bought .

One of those Saturdays a guy called Brian produced Astral Weeks by Van Morrison from his bag, and spoke in awe about this brilliant piece of vinyl garnered from his extensive reading and radio listening about this Belfast artist.

Once I had managed to save up enough money on the little pocket money we used to get, or had saved from a special occasions like communion or confirmation, we would venture into Savins and Clancys to buy the records that had been recommended to us by the bigger and cool boys in the neighbourhood.

I can still remember vividly buying Van Morrison’s Astral Weeks and Moondance together and feeling really proud of myself walking home to Farranshone.

It was only the 3rd and 4th albums I had bought, having already got Elton John’s first album and Joni Mitchell’s Blue. I was now officially one of the cool gang.

Back then life was indeed much simpler. You went out on the street to kick a football for what seems hours on end. You lived in one channel television land, your parents had the old Bush radio in the corner of the living room where you gathered around to listen to live gaelic football matches and hurling matches with Michael O Hehir, Jimmy Magee and Mick Dunne, and your soccer coverage came via the late great Philip Green courtesy of Raidio Teilifis Eireann.

Many of us of a certain age were starved of hearing popular music and our only outlet was that wonderful radio in the corner of the room, when we would, secretly most of the time, tune up the wave bands to search out the popular music of the time. It was almost a sin to change the Radio band from RTE1.

We would eventually tune into the great Radio Luxemburg or 208 on the medium wave band late at night. One of the first programmes I listened to was “Dimensions” with Kid Jensen back in 1972 and it was the first time I heard the unforgettable lines from Van’s Song ‘Madame George.’

“Down on Cyprus Avenue, with a childlike vision leaping into view

Clicking and Clacking of the high heeled shoe

Ford and Fitzroy, and Madame George”

These words transported me to another place, his lyrics clearly describing his local road, his wonderful words and keen observations put to music that resonates with me still. We can all see Cyprus Avenue in that song, and bring me back to that powerful first feeling every time I play that song.

George Ivan Morrison was born in Belfast on August 31 1945 and from a very early age was influenced by his father’s record collection of American records.

His first musical performance was on saxophone with a band called the Monarchs - a showband he toured with widely during the early 1960s.

His real music interest however lay in American music, like the blues, country, gospel and jazz music.

He formed the band Them with Billy Harrison in 1963. The band enjoyed three years of moderate critical and commercial success on both sides of the Atlantic. 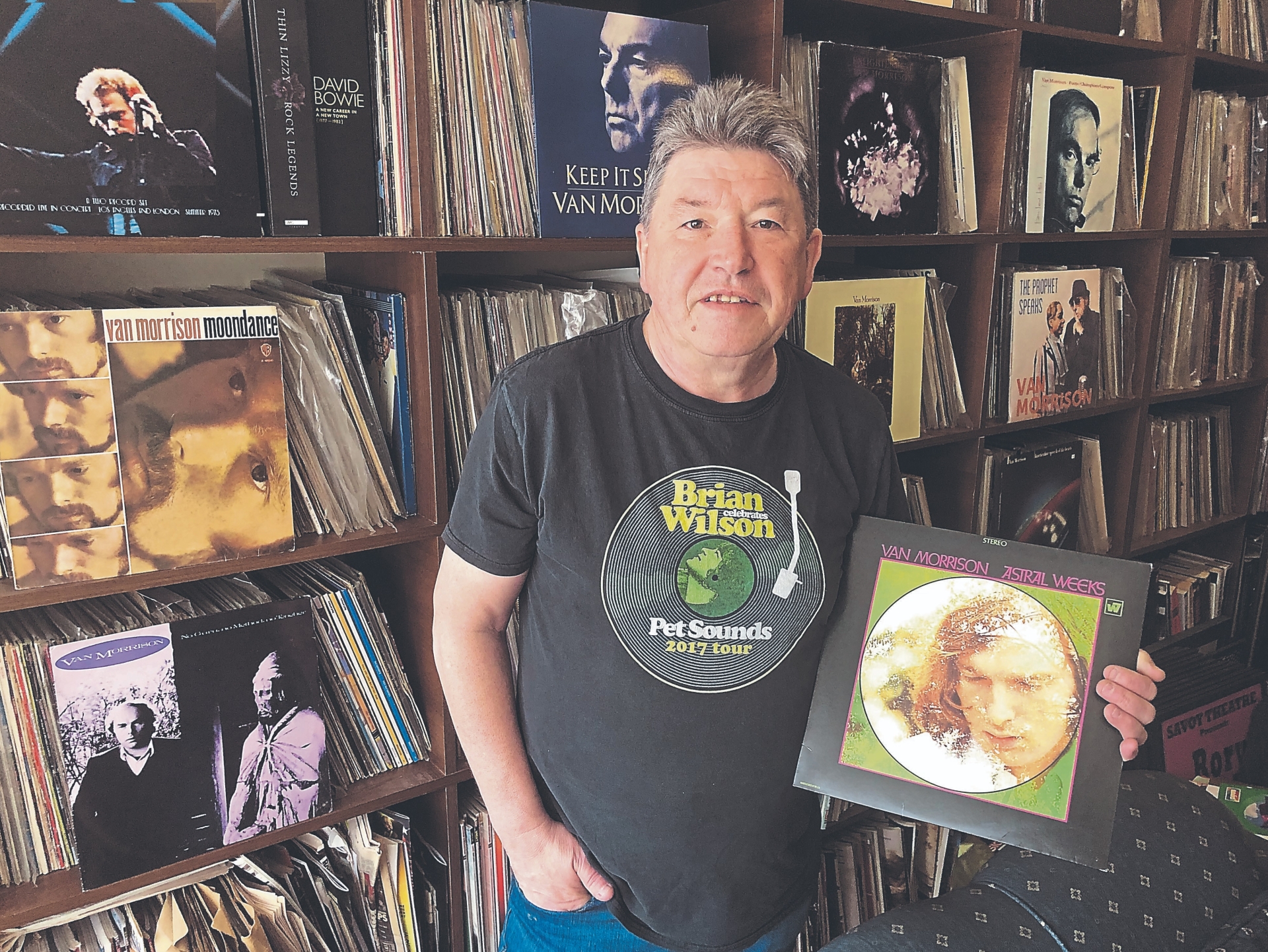 The band’s initial release, the blues standard “Baby Please Don’t Go” backed by Morrison’s “Gloria” provides a classic example of contemporary blues music as a response to the ever popular African American hits of the time appearing on labels like Motown and Atlantic records. It still remains the group’s best known work in my view.

After the demise of the band “Them” Morrison returned to Belfast for a brief time before moving to the USA to pursue a solo career under the direction of Bert Berns on Bang Records, where he recorded the classic “Brown Eyed Girl”.

Although the record was a hit for Morrison it was not a happy time for him on the recording front and from a personal point of view.

Morrison moved to Cambridge, Massachusetts, where he completed the roster of songs that would become “Astral Weeks” in 1968, a quasi – concept album about Belfast that has become one of the most influential albums in the history of music.

It was all the more remarkable in that it was recorded in two four hour sessions with some of New York’s finest jazz musicians, and even more remarkable was that Van Morrison was only 23 when he recorded this masterpiece.

Van Morrison has continued to record and tour right up to this day at regular intervals and has produced some of popular music’s most highly regarded records which include Moondance from 1970, Veedon Fleece, 1974, No Guru, No Method, No Teacher, 1986 and Hymns To Silence, 1991.

Morrison is without doubt one of the most important figures in popular music to have emerged from Ireland in any period.

There is now of course a huge Limerick connection to the Van Morrison touring and studio band with one of Ireland’s leading guitar players in former Tuesday Blue member Dave Keary.

He has been in Van’s band since the release of 2012 album “Born To Sing: No Plan B” and has been in the touring band for over 11 years now.

He has also featured on most of the albums Van has released over those years as the ‘go to’ guitar player in studio and on the live circuit, and is sure to get a great Limerick welcome when they play King Johns Castle on Wednesday June 29.

Two-time world boxing champion graduates from the University of Limerick

Van Morrison’s music has dealt with many of life’s issues over his 43 studio albums, an extraordinary achievement for any artist.

They have dealt with love, loss, grief the changing seasons, childhood memories, growing up, the Covid pandemic and his views on the vaccine, but no matter, his observations are never dull for sure.

Morrison has always been able to stir the loveliest of memories for me with his songs, in particular “In the Days before Rock n Roll” which he wrote with poet Paul Durcan and narrates these powerful words evoking the memories of so many small kids on the floor trying to change the radio

“I am down on my knees, at those wireless knobs.

And I’m searching for

In the days before rock n roll”

Van Morrison’s music has also been widely used in the movies, most of whom you will recognise “Brown eyed Girl” in the Tom Cruise movie Born On The 4th Of July, “Have I Told You Lately” in One Fine Day with George Clooney, “Someone Exactly Like You” from Only The Lonely with the late John Candy and Maureen O Hara, and of course “Moondance’ from American Werewolf In London starring Jenny Agutter.

His music has transcended over 6 decades and heads in to its 7th Decade in good health with his current offering “What’s It Gonna Take?”

I have been a fan of Van the Man Morrison for an awful long time now, in fact most of my teenage and adult life. I have seen him in concert 26 times in total, from the Montreux Jazz Festival in Switzerland, to the Cork City Hall in Cork, The Rainbow Theatre in London—some have been very good performances, some not so good.

I am hoping that his performance at the historic King John’s Castle adjacent to the beautiful Shannon River in this wonderful Treaty city of ours will inspire Van to one of his great performances on June 29.

Either way - for this lifelong ‘Van Fan’ in the words of his live 1974 album.