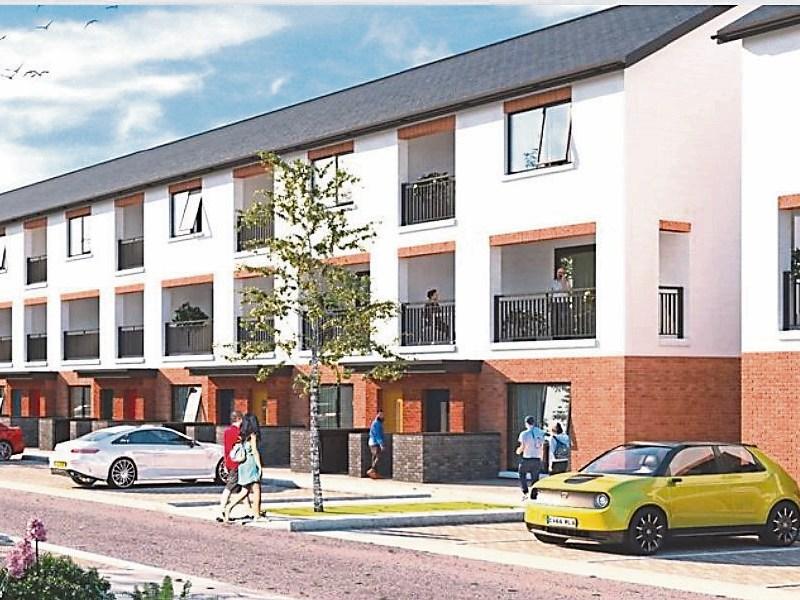 A render of the proposed development at the Condell Road, which has been approved by An Bord Pleanala

AN BORD Pleanála has formally approved proposals for a new estate on the city’s northside.

The Clonmacken Partnership has secured permission for a project which will see 165 residential units on a site of around 4.55 hectares in size.

The estate has a working name of Clonmacken Gardens, and according to the developers, there will be 42 three-bed homes, and one two-bed bungalow.

On top of this, 42 duplex units will be built. These will be in a mix of 21 two-bed ground floor units, 13 three-bed upper-floor units, and eight one-bed upper floor homes.

Some 80 apartment units are planned – 17 with one bedroom, 61 with two-bedrooms and two with three-bedrooms.

A 438 square-metre creche facility will also be constructed.

The multi-million euro blueprint bypassed local planners at Limerick City and County Council as it is numbering more than 100 units.

This comes with laws permitting this put in place in order to speed up the delivery of houses to tackle the housing crisis.

Councillors did put together a submission on the plans, with many taking the opportunity to have their say on it at last March’s metropolitan district meeting.

Northside member Sharon Benson expressed concern at the pace of development in the area, with two other housing estates still set to be completed.

An Bord Pleanala agreed with the recommendation of its inspector to grant permission for this development.

But 30 conditions were imposed on the developer.

Among these were a stipulation that a total of 48 car parking spaces be removed from the development, with these spaces instead landscaped and incorporated into the public, communal space provision.

The developer is also being asked to submit a bat conservation plan for the site to include reports of new bat activity and roost surveys of the site, along with measures to avoid injury to bats during tree felling or demolition work.