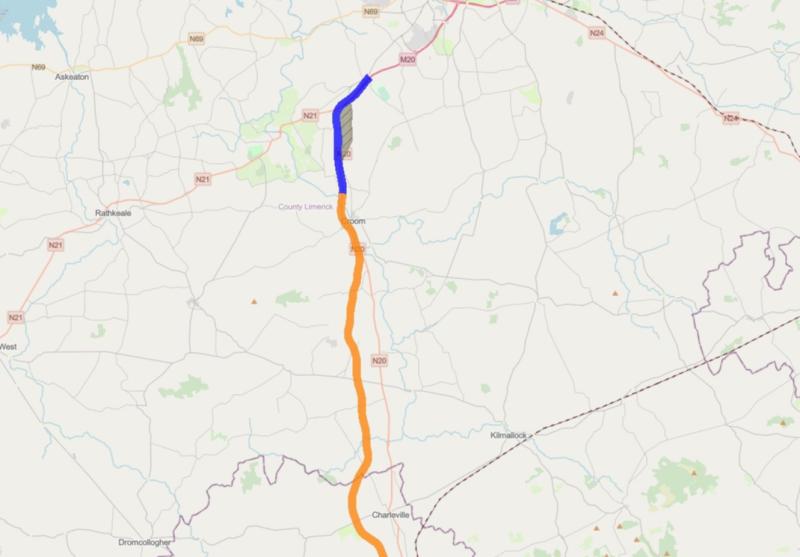 The preferred route option of the N/M20

AN IFA delegation from Cork and Limerick has met with the senior project managers of the proposed new 80km long N/M20 Cork-Limerick road project.

The N/M20 project will involve 80kms of new and improved dual carriageway road between Cork city and Patrickswell that will provide bypasses of Mallow, Buttevant and Charleville. Reports estimate that the cost of the project to be in the region of €1bn to €1.5bn, equivalent to €12m to €18m per km.

After the meeting, IFA environment chairman Paul O'Brien said the IFA made it very clear that the 200 farmers along the potential route of the new road are extremely concerned about the upheaval facing their farms and farming businesses as a result of the project.

"These farmers are living under an unacceptable cloud of uncertainty over the last 20 years, when plans for the road were first announced,” said Mr O'Brien.

According to the IFA, the project team said they would examine any individual cases currently in the 500m potential road corridor and make a decision quickly so developments can be progressed. The IFA pointed out the postponement and delays on dwellings, farmyard and enterprise developments has had a very costly impact on some farmers in the area.

The IFA team, including Limerick IFA's chair Sean Lavery and environment chair Barry Murphy, told them that engagement and information is "essential".

"Now that the preferred route option has been selected, there needs to be intensive engagement and consultation with individual farmers along the route.

"The project team is currently actively engaging with farmers and committed to providing a design update every four to six months over the next two years, when the proposals should be ready to submit for planning," said Mr O'Brien.

As the design develops, the 500m corridor will be pulled back to a 100m corridor. The project team estimated that 30% to 40% of the new roadway will be along the existing route.

The IFA also raised important issues around the design process in respect of access and local roads for landowners. Issues regarding wildlife disturbance and badgers, and the implications for disease and TB was also discussed.

The IFA say the project team informed them they are currently writing out to everybody along the route and will be commencing land surveys very soon.

Mr O’Brien said it is very important that access agreement is sought from the farmer beforehand and flexibility is provided to avoid any interference with silage grounds, crops or grazing arrangements. He also pointed out that there are agreed payments in place for land surveys.

On the proposed Greenway development, the IFA say the project team said a feasibility study is currently being undertaken and a decision will be made at a later stage on whether or not the Greenway will be part of the road project or a separate project in its own right. Mr O'Brien said this has major implications for farmers and landowners in the area.

IFA is currently renegotiating the IFA/TII roads agreement with TII and this will be "very important for any landowners on the new road development".

An online public display platform has been developed on the project website www.corklimerick.ie