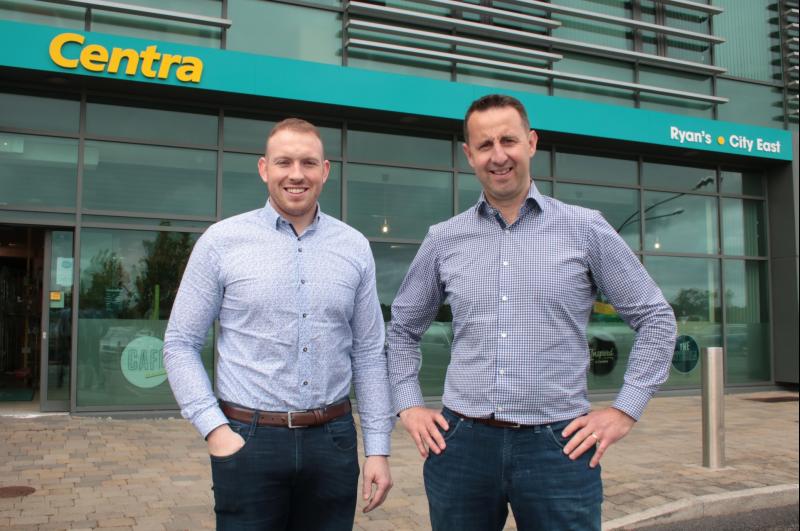 JAMES Ryan opened his fourth Centra store in City East on the Ballysimon Road in January 2020.

With over 1,000 Northern Trust employees, and growing, on his doorstep it was an astute move but little did he know a global pandemic was around the corner.

Mr Ryan’s area manager, Shane Dowling, said: "We got six wonderful weeks." But then in the space of a day everybody at Northern Trust began working from home due to Covid. And Mr Ryan had to shut the Centra's doors too.

"Throughout the Covid you couldn't even dream of keeping the place open," said Shane.

But now the Limerick hurling great and his boss are looking forward to reopening the shop on Monday, May 16.

"It definitely is a sign of things coming back to normal. I don’t know how many people are back in the office in Northern Trust, maybe 600 / 700 with hopefully more to come after the summer.

"The Limerick Educate Together school is being built across the road so that will all help too. The big thing we found is that because it is off the road people weren’t aware of it and it's just for people to know that it is there and back open on Monday. It’s an ideal place to come if you’re meeting somebody on business as there is a private sit down area and it’s on the edge of the city,” said Shane.

It will initially be open Monday to Friday from 7am to 4pm.

Mr Ryan said he was delighted to be reopening his fourth Centra in Limerick.

"We are looking forward to welcoming back customers that we met when we opened in 2020 and giving them first class customer service again. Please bear with us for the first few weeks as we try and get back to normality,” said Mr Ryan. Shane said it is like opening a brand new store.

It would be remiss not to ask him about the Limerick-Clare clash in Ennis on Sunday. Shane started when the Banner lowered the Treatymen's colours in Cusack Park in 2018.

"It is like you are playing inside a dungeon. It feels like a really small pitch even though Anthony Daly is quick to remind everybody that it is the same size as Croke Park. It just doesn't feel that way, especially when you are playing. I never enjoyed playing there. I don't know why - it is just a colosseum and more power to Clare for having it that way," said Shane.

It is a very similar scenario to 2018 as Limerick played Clare last in the round robin and were already qualified for the All-Ireland series. The free-scoring forward said the fact they were guaranteed to be in the top three may have contributed to the loss on the day.

"Maybe because we were through but sometimes it is nearly the best thing in a way. It refocused the mind and showed when we didn't play to our potential we were obviously very beatable. We were obviously able to refocus for the rest of the year so we could nearly thank the Clare lads for refocusing us!” said Shane. We all know what happened on August 19, 2018.

But win, lose or draw in Ennis on Sunday, Centra in City East Plaza will be open on Monday morning.