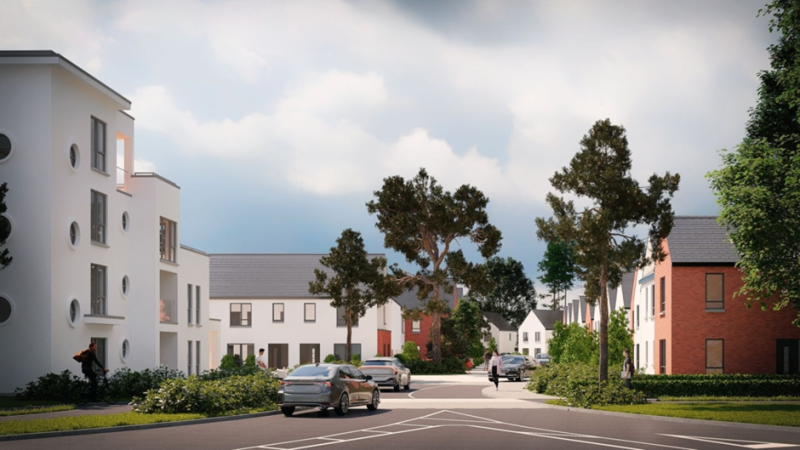 A render of how the new estate in Raheen could appear

DEVELOPERS have sought planning permission for a new estate in Limerick which, if approved, could bring up to 400 homes to Raheen.

The project location is on lands adjacent to Inis Mor, Inis Lua and Ballinvoher with access via Ard Aulin roundabout on the R510 between Raheen and Mungret.

The development will see 202 homes, 156 apartment and 26 duplexes planned.

All between two and four storeys in height, 20 two-bed homes are planned, 156 three-bed houses and 24 four-bed units.

In terms of the apartments, these would be broken down into 18 three-bedroom units, 92 two-bedroomed, and 46 with one bedroom.

Developers hope this massive development will help to ease the housing pressure in the local vicinity, making rents and housing more affordable for others.

Project manager Gary Lawlor said: "Today’s announcement demonstrates our commitment to Limerick. Limerick is a thriving city and county with a growing population and workforce. In recent weeks hundreds of high-end jobs have been announced for the city and many of these workers will be seeking high-quality housing to live in. This proposed development offers this housing solution."

"The site for the development has access to the R510 and is close to all local amenities such as shops, educational facilities, centres of employment, parks and hospitals. Almost one-third of the development will be reserved for open spaces, such as a playground, large courtyards, wooded areas, cycle pathways and pedestrian walkways," he added.

On top of this, a creche is planned, while there will also be more than 300 bike storage stands.

Mr Lawlor concluded: "We are submitting these plans as we want to see this site, close to Limerick City developed and help address the City and County’s housing need. If permission is granted, we would hope to begin construction as soon as possible."

The project is being progressed directly to An Bord Pleanala under fast-track legislation designed to speed up the delivery of housing across Ireland.

As part of this, the developers were required to set up a web site giving details of how people can have their say on the plans. This can be found at https://raheenlimerickshd.com/