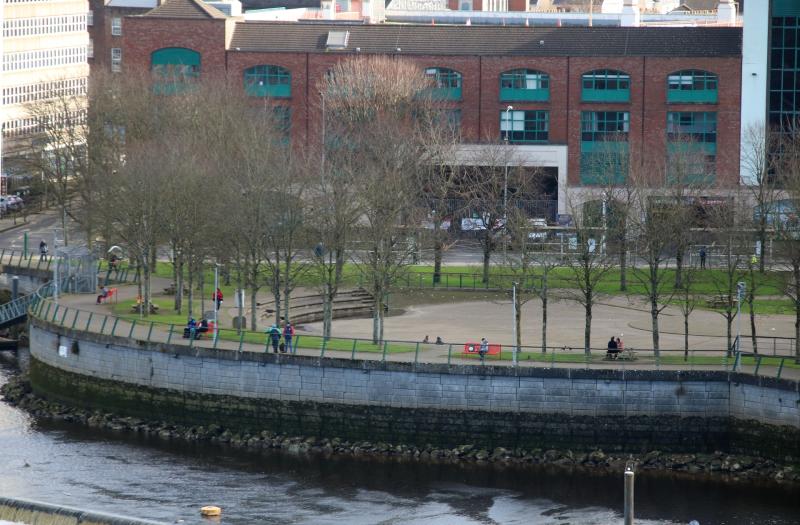 A basketball hoop and table tennis facilities are to be installed at Arthur's Quay Park | PICTURE: Adrian Butler

RECREATIONAL and social sports in the city are set to thrive as plans for basketball, volleyball and table tennis equipment across several local parks were revealed.

Details of new equipment were revealed at the latest metropolitan meeting, which will include a basketball hoop and table tennis facilities in Arthur’s Quay Park, in the heart of Limerick city.

Phelim Macken, Co-Ordinator with LSP, stated: “One of the activities we have seen to be hugely in need during Covid, was basketball courts and the ability to shoot hoops.”

Pointing to a lack of sports halls available in the inner city, he said the aim of the capital funded projects by LSP, delivered by the Council, is to keep people active outside of competitive sport.

“Evidence shows that structured sport has some decline,” he said, highlighting that a regimented weekly structure is no longer suitable to how some young people are now living their lives.

Some of the other sporting works across the city include the installation of a basketball court and volleyball posts in O’ Brien’s Park as well as volleyball posts earmarked for People’s Park.

The ‘Boro’ Field, next to Janesboro AFC’s grounds will receive a half basketball court and improvement works are to be undertaken to public soccer fields at Shelbourne Park.

Baggot Estate, labelled by Mr Macken as one of the recent “hidden gems in our city”, will benefit from outdoor exercise stations as part of trim trails along with a children’s natural play area.

The crucial element, he outlined, is that the facilities are free. “It’s not about dumping a load of amenities, there needs to be an element of purpose to what fits and how people use it,” he said.

Influences were drawn from trips with youth leaders to both Madrid and Liverpool, with the latter seen as the poster boy of an inclusive active sporting city, helping marginalised communities.

Mr Macken recalls seeing several boulders with climbing grips across parks in the Spanish capital, with no safety nets or signage. He described this as a “different mindset” to here in Ireland.

“We are very gripped by insurance, claims and the fear associated with it,” adding that there is a need for more free and accessible play here in Limerick.