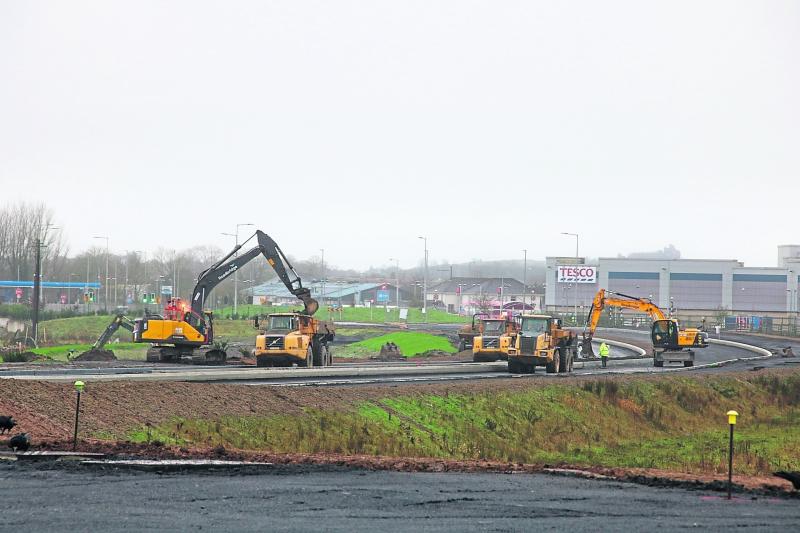 The Coonagh to Knockalisheen Road under construction earlier this year | Picture: Adrian Butler

THE LIMERICK-based construction company Roadbridge has entered receivership, it has been confirmed this afternoon.

In a statement, the board of the firm said that as a result of "insurmountable financial challenges", Roadbridge Holdings has requested Bank of Ireland to appoint receivers.

The receivers are Stephen Tennant and Nicholas O’Dwyer of Grant Thornton.

Founded in 1967, and headquartered in the Ballysimon Road in Limerick, Roadbridge is a civil engineering and construction company which directly employs 630 people in Ireland, Britain and Sweden. It's understood approximately 150 staff are employed by Roadbridge in Limerick.

Staff from Roadbridge are in the process of constructing the Coonagh to Knockalisheen Road, and are also involved in a project to deliver a number of modular units in the Moyross estate.

It's understood construction equipment was removed from the site of the €58m roads project earlier today.

The firm's receivership places a question mark over the timelines of these schemes, with local representatives and business people set to seek assurances in the coming days.

In particular, the Coonagh to Knockalisheen Road is seen as being vital to open up Moyross, and develop industry in this part of the city - with the not-for-profit University of Pittsburgh medical center announcing it would open a facility in the wake of its fresh approval last year.

Roadbridge chair Aidan Murphy stated: "We have been working tirelessly for the last number of months to find a solution to the grave challenges faced by the company. My fellow directors and I greatly regret having to take this step, but unfortunately, it was the only possible option at this time.

The board recognise the support of all our stakeholders, including our bank, Bank of Ireland, in difficult circumstances as the directors explored every opportunity to save the Company. We are committed to working closely with the Receivers now in order to get the best possible outcome for employees, creditors and stakeholders."

Earlier today, Transport Minister Eamon Ryan was questioned on the matter, given Roadbridge's connection to the €58m road which will open up Moyross.

Labour councillor Conor Sheehan urged the government must step in and protect the roles of staff employed by Roadbridge.

Mr Ryan said he was only made aware of Roadbridge's troubles this morning, but added there is an "impetus" to protect the firm.

Cllr Sheehan said: Today's announcment could result in the road project being delayed for up to two years. This is completely unnaceptable for the community who fought so hard for the road. I am calling on the government to intervene to secure an investor as soon as possible. If this is not possible we need a fast track procurement process to ensure the rest of these important projects get completed as soon as possible."

Roadbridge representatives have been seeking a buyer for the firm, which is well-known for its work on motorways and other State projects since last year.

National reports suggest Roadbridge owes an estimated €30m to €35m to Bank of Ireland, its main creditor, but also has mounting trade liabilities.

At the same time it has building contracts worth a total of €750 million over the next two-and-a-half to three years. Management hoped this would help attract investment or a buyer.

Roadbridge specialises in large projects worth tens or possibly hundreds of millions of euro each. Insiders say that it has traded on very tight profits, between 1.5 per cent and 2 per cent, leaving little room for error or unforeseen risks.

Founded and controlled by the Mulcair family, Roadbridge has operations in Ireland, Britain, Europe and has worked in the Middle East.

The firm is also involved in the high-profile High Speed Two rail project in Britain, with trade publications cross-channel reporting its staff stopped working on one of these sites yesterday.