‘Like a bat out of... Croom’ - Meat Loaf concert in Limerick village recalled by locals 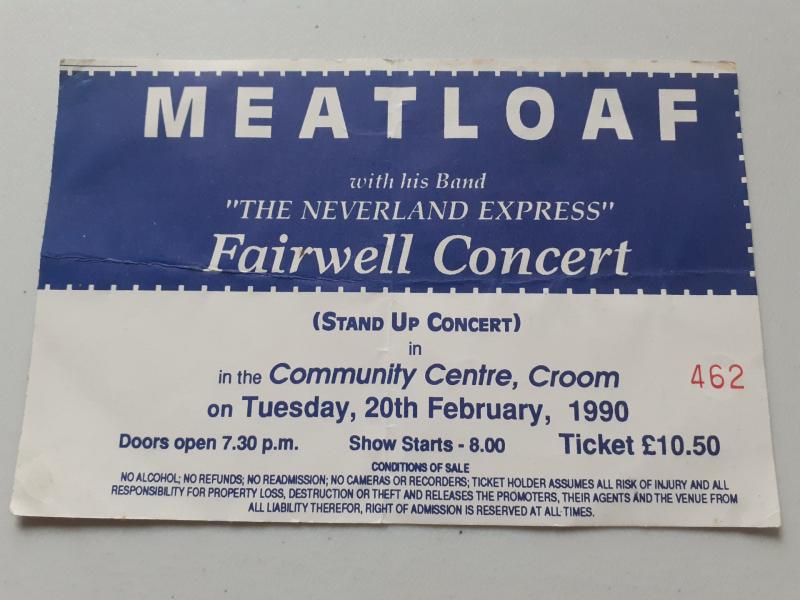 THE PASSING of superstar singer Meat Loaf has brought back fond memories from one Limerick community, where he played to a packed-out concert hall in the spring of 1990.

He was the biggest star to ever come to Croom, said one local attendee, adding that it might as well have been like Elvis Presley himself had arrived in the village.

Thousands of revelers from all over Limerick and Munster flocked to the Croom Sports Centre, on February 20, 1990, for a stand-up concert headlined by the American rock star.

Croom native Seamus Sheehan, who was involved in organising the event, remembers the Bat Out of Hell star stepping off the bus, with his special four-piece entourage.

“He was never on his own at any stage of the night. At one point, he needed to use the bathroom, so we had to close the main door and the door to the hall, so he could have it all to himself.

“There were two security guys standing behind him the whole time,” he told the Limerick Leader.

Despite this, he recalls him as being a very personable man, who stood on stage for about 20 mins after the concert had concluded, shaking hands and talking to all the locals.

Maureen Curtin, from Croom, was eight and a half months pregnant at the time of the concert. She recalled a huge buzz around the town leading up to the ticketed event, costing £10.50 at Golden Discs and Star Discs.

“He was brilliant. You had to pinch yourself to believe it was real. The next day I was with my sister in McDermott’s in Patrickswell, when someone who looked like him walked in.

“Sure enough it was him. My sister managed to get his autograph, which she still has at home.”

Gerard Wallace remembers nothing like it ever before or after in the village, with incredible noise coming from 12 or 14 giant speakers, as he stood no more than 60 metres from the stage.

He stated: “It wasn’t every night you get an international star performing to a thousand people in an Irish village.”

The Croom man posited that Meat Loaf’s career wasn’t in the best of shape at the time.

Following his Irish tour, he added, the I Would Do Anything For Love singer’s career began to take on a renewed vigour and passion, with Limerick locals taking great pride in “playing their part.”

“Although it wasn’t a reincarnation, it seems there was certainly an extra bit of zest put into his career after his tour in Ireland,” Gerard concluded.