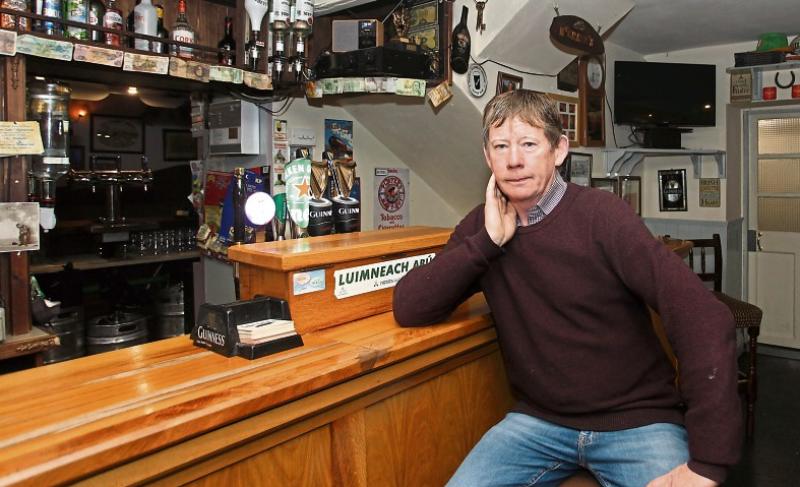 Pat McGrath of McGrath's pub in Kilfinane says the pub trade has been decimated by Covid-19 | PICTURE: Brendan Gleeson

PUBLICANS across Limerick are in the depths of a “bleak” winter with many of them being forced to shut their doors for a number of days, and in some cases even the full month of January, due to Covid-19.

The 8pm closing time coupled with staff absences due to contracting Covid-19, or being a close contact, have forced many county and city publicans to close their doors for a time.

One of these is McGrath's Bar in Kilfinane which closed for a week over Christmas due to positive cases among staff.

Owner Pat McGrath said he knows of seven or eight other local pubs that shut their doors during their busiest time of the year.

“The three pubs in Kilfinane were all closed for a week. We have been affected hugely by it. Five out of the six staff here contracted it so we had to close.

“People are afraid to go out now because the case numbers are so high, especially people over 35, we have noticed a major drop off in numbers”.

This sentiment was echoed by VFI Communications and Public Affairs Manager Brian Foley who said that roughly 2,000 pubs across the country have had to close or reduce opening hours.

“December is usually the month for them to make hay and set them up to get through until St Patrick's Day but pubs had a poor December as well.”

Paul Flannery, the Vintners Federation of Ireland representative in Limerick city said: “It’s very bleak at the moment in terms of what we are seeing”.

“A lot of pubs are seeing it’s not viable to stay open by paying operational costs and wages. Midweek, Monday to Friday, who will finish work at 5pm to go out for a half an hour to an hour? The viability isn’t there to open so they’ve made a decision to close until the restrictions are lifted and the 8pm curfew is gone.”

Meanwhile, closures do not seem to have affected hotels as much as they have pubs, with Elaina Fitzgerald Kane from Fitzgerald's Woodlands House Hotel in Adare saying: “Like everyone else we have had people who have been out but there hasn't particularly been a huge spike”.

She said that while larger events did not go ahead over Christmas, “we had some smaller weddings and people getting away for breaks. We didn't have as many larger family events as we would normally."