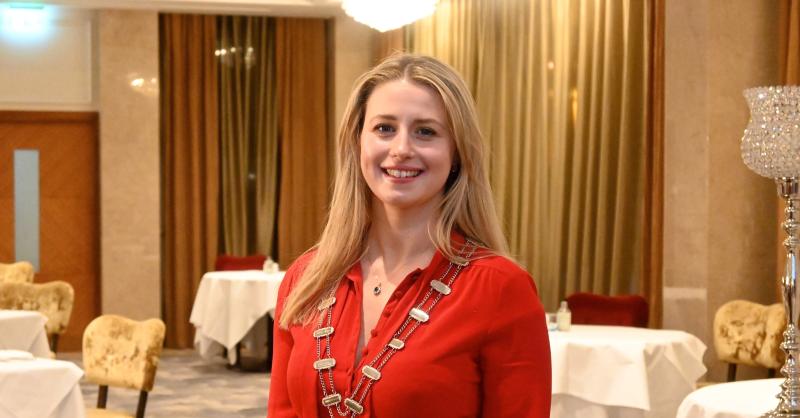 Head of Marketing at Keeper Solutions, Emma Wilson, was presented with the chain of office for 2022.

NETWORK Ireland Limerick, a leading forum for women in business has elected a new President for 2022.

Head of Marketing at Keeper Solutions, Emma Wilson, was presented with the chain of office by outgoing president Caragh O’Shea.

Following the appointment, Ms. Wilson announced that she is stepping into her new role with great pride.

She added that Network Ireland Limerick and the broader network have played a central role in her professional and personal development to date.

“I am looking forward to building on the solid foundation Network Ireland Limerick has formed to support the development of women both professionally and personally across many different aspects of both business and life,” she told the Limerick Leader.

Business Manager for Shannon Region Conference & Sports Bureau Karen Brosnahan has been confirmed as Vice President of Network Ireland Limerick for the year.

As President of the Network Ireland Limerick, Emma will be responsible for fostering the aims and objectives of Network Ireland, representing the Limerick branch at National Executive meetings, and overseeing the smooth running of monthly events locally.

Ms. Wilson intends on introducing additional events and activities so that “members further expand their network and forge deeper connections with one another”.

Looking forward to her year as president, Ms. Wilson hopes that society will learn to operate in the “new normal” with in-person connections a vital element of this.

She said: “As restrictions evolve, we will ensure as many in-person networking events as possible. These will allow members to reconnect and immerse themselves in the true power of the network.”

Ms. Wilson has chosen 22q11 Ireland as her charity partner.

Through her chosen charity, she hopes to shed a light on inclusivity and diversity in employment and help raise awareness for 22q11.2 deletion syndrome,  which she described as the “most common rare disease in the world”.