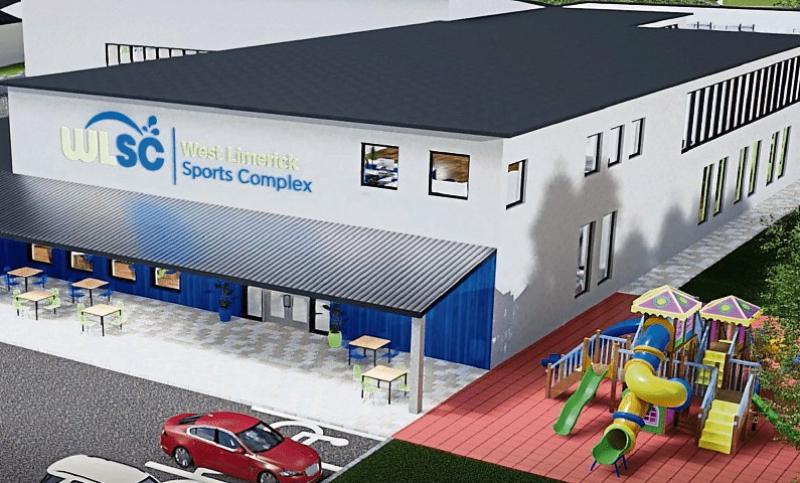 An impression as to how the proposed complex will look

THE residents of Newcastle West and the surrounding area are being asked to sign a petition and show their support for a project which would include the building of a new 25m swimming pool in the town.

The Vision 2025 project is being pioneered by the West Limerick Sports Complex, formerly Killeline Leisure Centre.

“The complex has this week unveiled an ambitious vision showing plans to become a leading sports complex for the town and wider West Limerick region by extending the facilities on to an adjoining two acre site,” Lorraine Higgins, managing director of the complex said in a statement.

“The last two years have particularly highlighted the need for such a facility in the community,” Ms Higgins continued. “We aim to maximise the huge impact we are already creating, we have a great track record and are growing from strength to strength. Now we need the whole community behind us to drive this transformation.”

The Vision 2025 proposal comes against a background of several years of controversy surrounding the issue of a new pool in the town.

The Desmond Complex Pool Committee has campaign for many years for a publicly owned pool in the town, based on their feasibility study of 2013/2014 while the former Killeline Leisure Centre argued that the feasibility study was out of date and called for an impact study.

Limerick City and County Council in 2016 said the study left some questions unanswered. An impact study was commissioned which concluded a new public pool would adversely affect privately owned pools in the region. This has been vigorously challenged by the Desmond Complex Pool Committee.

In 2017, Killeline Leisure Centre became a not-for-profit social enterprise and now trades officially as the West Limerick Sports Complex. “Over the past two years, the team and board have listened to, and incorporated feedback and ideas from members and the wider community into ‘a vision for 2025’,” Ms Higgins said.

In that time, also, she pointed out, a number of improvements have been made at the complex, including a full refurbishment of the gym which was completed last year with the support of €121,000 from the Sports Capital Programme and the launching of a new brand and image, with a new website and online booking system.

“The long term mission is to increase participation among all user groups, focusing particularly on disability and disadvantaged groups as well as providing the best sports and fitness services and facilities to the community,” Ms Higgins said.

And she urged people to sign the petition at wlsc.ie and show their support, if this is the kind of facility they want.