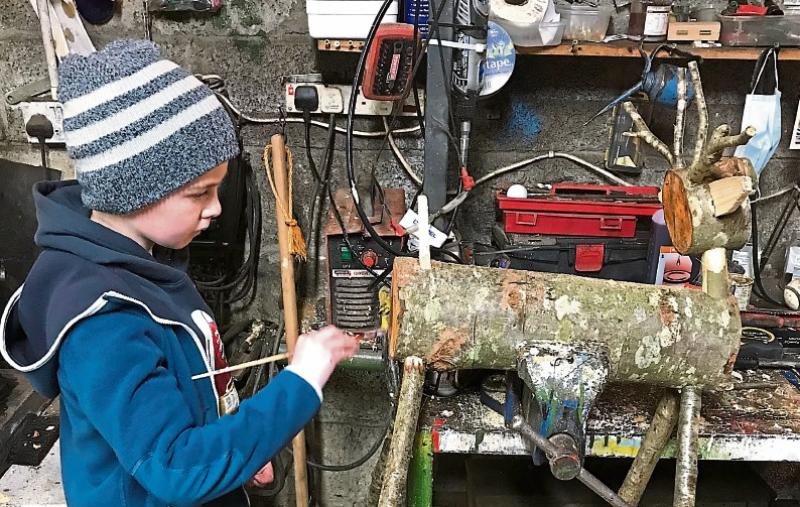 A LIMERICK charity boss has hailed a local youngster’s “heartwarming  generosity” after he donated all the proceeds from selling log reindeers to the good cause.

Mark Ryan, 9, teamed up with his neighbour and friend in O’Briensbridge Jack Byrnes to create hand-made reindeer using logs which had fallen on the side of the Shannon near their respective homes.

Rather than pocket the proceeds, the young man declared: “I have everything I need” and instead donated the takings to McGarry House, which is run by the Novas homelessness charity in the city.

Novas policy director Dr Una Burns gratefully received a cheque for €800 from the pair this week, and she said: “It’s so heartwarming, it’s such a lovely story. Such generosity embodies the real spirit of Christmas.”

“The money raised is going to McGarry House which is the largest low-threshold accommodation service in the Mid-West. It supports 70 people between long-term accommodation and temporary accommodation. We are so grateful to Jack and Mark for such a lovely initiative, making these beautiful decorations, and for all that cash being donated to Novas,” she added.

The pair produced almost 40 of Santa’s helpers and sold them for €20 a time, giving Novas a seasonal boost after they saw huge demand.

It was last Christmas when Mark approached Jack with his elder brother Sean, 11, saying he would like to make some reindeer with the logs which were found along the riverbank.

Initially, they were for friends, family, mother and aunties, but also a number of people purchased them.

Mark used the proceeds last year to donate to the annual shoebox appeal this.

Jack, 66, is very close to Mark’s family child-minding Mark and his brother Sean before they began studying in Bridgetown National School.

A former steelworker, Jack has always created items from wood in his spare time – and it’s something he says Mark wants to continue doing in his workshop on the banks of the Shannon when the lad gets a bit older.