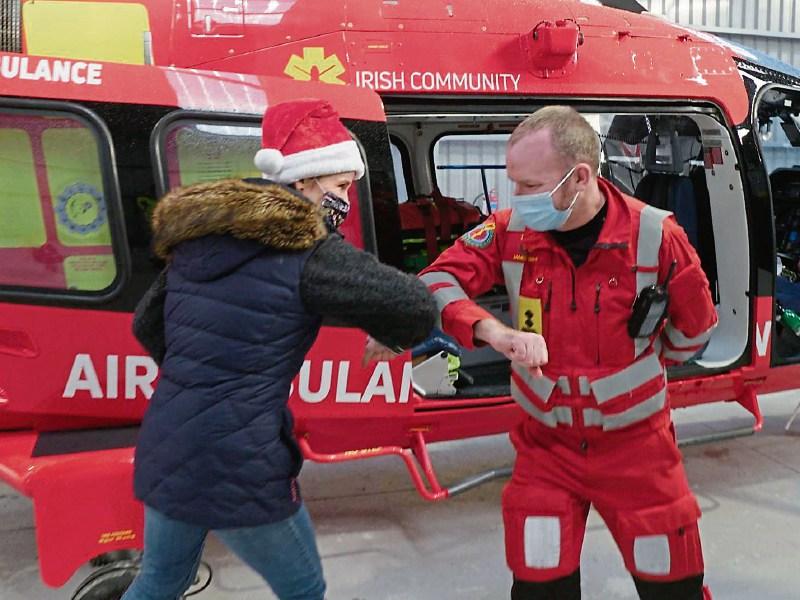 A LIMERICK woman has praised the work of the Irish Community Air Ambulance after they came to her rescue when she was attacked and seriously injured by a cow.

Noelle O’Brien was walking in a field between her own home and her in-law’s house when the incident happened in 2019.

The Galbally woman was walking with her friend along with their young children when the cow knocked Noelle to the ground.

She received serious injuries but her four-month-old son Paudie, who was harnessed to her chest at the time, miraculously escaped injury.

Noelle said they had walked in the field many times before but on that day the group were unknowingly walking towards the newborn calf of the cow.

She said: “I saw the cow coming towards us and I tried to shove her off, she backed off but then she went for me. She hit me on the side with her head so I shouted at the kids to get in under the electric fence. Then the cow hit me again and I ended up on the ground.

The mother-of-three managed to get her son Ollie and daughter Andie to safety along with little Paudie, however, she suffered serious injuries.

She explained: “My mother-in-law brought the kids in and the ambulance was called, the air ambulance was there within 15 or 20 minutes. They brought me to Limerick (UHL) and we were there in less than 10 minutes. I got immediate care and scans there.

The charity-funded Irish Community Air Ambulance, which launched in 2019, has attended a number of incidents in Galbally since the service was first launched.

“I was there (in hospital) for a week and after I came home I had more pain so I went back in and another scan showed I had damaged two vessels in my liver.”

Noelle then travelled to Cork University Hospital where she underwent surgery to stop the bleeding. It took her a year to recover and the incident left her with several broken ribs and severe internal bleeding.

She said the crew of the air ambulance, which is based at Rathcoole in North Cork, saved her life and earlier this month she was reunited with Advanced Paramedic James Ward who treated her on the day.

“It was emotional to see him. You never want to think what would have happened if they weren't there. Their service is invaluable. They were so calm and they are so good at what they do.”

Noelle met the crew from the day of her accident at their base with the reunion filmed for Ear to The Ground.

Ahead of the broadcast, Micheál Sheridan, CEO of Irish Community Air Ambulance, said: “We’re delighted to feature on Ear to the Ground this Christmas. It was wonderful to welcome Noelle to the base and to see her doing so well. We work closely with the National Ambulance Service and our crews respond to serious incidents and medical emergencies every day of the year, including Christmas Day, often in rural and isolated areas."

Mr Sheridan added that serious traumas on farms account for a significant amount of our taskings every year. "We’ve responded to almost 80 farming and equestrian incidents so far in 2021 which is an increase on 2020. Each mission costs an average of €3,500 all of which has to be raised or donated. I hope the Ear to the Ground episode will give viewers an insight into what we do every day, how we bring hope to people when they need it most and encourage the general public to support us this Christmas and during 2022.”

The episode will be broadcast this Thursday on RTÉ One television at 7pm.