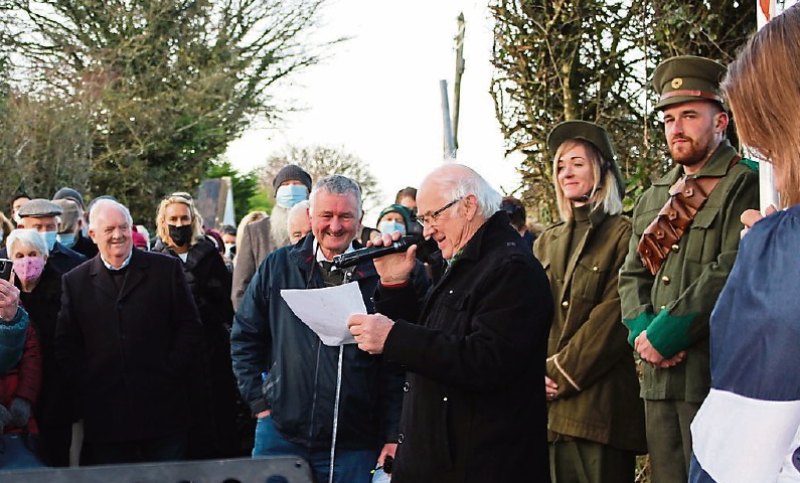 Thomas Murphy, Ballylanders, and David Tobin, Glenbrohane, were killed by Crown Forces. Last December, David Tobin, a grand nephew of Mr Tobin residing in Austin, Texas, got in touch with the Leader with a researched and factual account of their deaths.

A non-political anniversary Mass was planned by the Tobin and Murphy families in Glenbrohane church last January but it had to be called off due to new Covid guidelines. However, the local community wasn’t going to forget their two fallen heroes.

This month, identical monuments were unveiled to Tom Murphy and David Tobin after Mass in Glenbrohane. They were blessed by Fr Joe Tynan who had celebrated Mass.

The Mass was poignant because David, aged 23, and Thomas, 29, of the East Limerick Brigade, attended morning Mass at St Patrick's church Glenbrohane on the day they were killed.

According to David’s brother, Ned, the two young men were spotted by an informer in church that January morning. They then went to visit David’s mother. Both were shot while attempting to escape. They had taken a break from activities for the Christmas period.

On December 5, 2021, the parade from the church to the monuments was led by a piper accompanied by “three volunteers and a nurse” in the uniform of the period and followed by the Murphy and Tobin families, as well as the local community. The attendance was estimated at 250.

John Murphy, one of the speakers at the event organised by Denis McCarthy, a grand-nephew of Tom Murphy, summed up the mood of the day.

“While recalling the events of 1921, the atmosphere in 2021 was one of remembrance but despite the sombre occasion there was a sense of celebration that the monuments were finalised within the 100 years."

“They are monuments to commemorate the bravery of both men and the sacrifice they paid then, with others, ‘So that Ireland is now Independent and Free’ which is part of inscriptions,” said John.

MC for the day was Morgan Murphy, member of Glenbrohane Community Association. Ceremonies included the blessing by Fr Tynan; singing of Amhran na bhFiann as the National Flag was borne by one of the volunteers; playing of The Last Post by a bugler; speeches by Denis McCarthy, John Murphy and John Tobin; playing of Reveille by a bugler and songs – The Galtee Mountain Boy and Fields of Shanagolden”.

John said the event was totally outdoor, except for Mass, and the ceremonies and event were non-political.