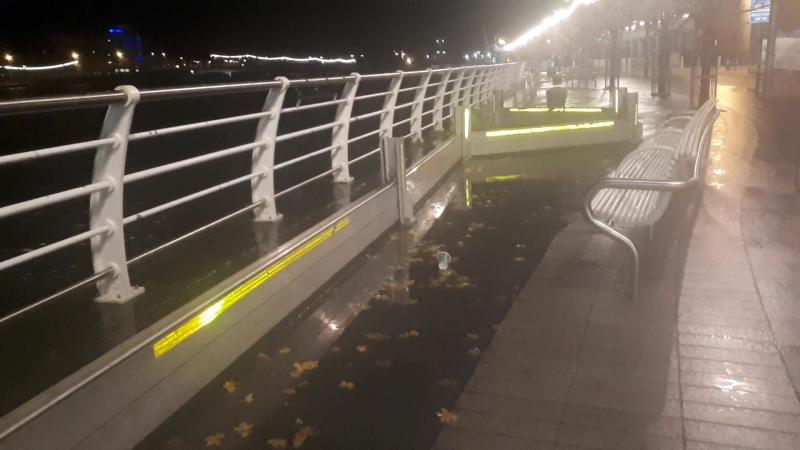 THE PEOPLE of Limerick city and county have battened down the hatches as Storm Barra roars in over Munster this morning.

An orange wind warning for Limerick came into effect from 6am this Tuesday and will remain in place for 24 hours .

The warning from Met Éireann states that southerly winds which will later become northwesterly, will reach mean speeds of 65 to 80 km/hr with severe or damaging gusts of up to 130 Km/ hr, possibly higher in coastal areas.

Good morning from a very windy #Limerick city, where #StormBarra has hit. Windy and gusty, but no major damage here as of yet - but still early days.

Wherever you are today, be sure to stay safe.

As part of weather preparations, Limerick City and County Council has been installing flood defences along the estuary and city quays.

In the city centre this morning no major damage was visible, although the River Shannon had burst its banks in places and there were heavy gusts of wind.

Flood barriers are being installed at vulnerable locations in Askeaton and Foynes, as well as on the city quays along the Three Bridges route.

This severe weather warning colour code indicates that “recipients take action to protect themselves and/or their properties”.  Wind gusts of up to 130 km/hr and rainfall of 70mm or greater in 24 hours is anticipated in areas under a red warning.

All schools in Limerick have been closed for the day by the Department of Education in anticipation of Limerick being moved up to a red weather warning.

BREAKING: Limerick schools and colleges to close as Storm Barra moves in

The closure of all playgrounds and parks in the county came into effect as of this morning, with Limerick City and County Council urging the public to stay inside for the duration of the storm.

The Department of Social Protection has also advised of the closures of its offices today in Limerick and around the Storm Barra impacted area.

The HSE has confirmed that all routine mental health service appointments across Limerick, Clare and North Tipperary are cancelled today due to the storm. Mental health teams will be in touch with patients to advise

In terms of public transport, Bus Eireann has reported a number of disruptions to its services in the region.

While Limerick city bus services will run at present, all school transport has been cancelled.

However, due to the closure of the University of Limerick, routes 304, 304a and 323 will not serve the campus due to the access road's closure.

A number of inter-city routes will also not run for safety reasons - route numbers 13 and 14 from Limerick to Tralee and Killarney respectively.

All services between Limerick and Cork on the bus are cancelled, while a limited service will link the city to Galway. Final departures at 1.05pm from Galway and 1.25pm from Limerick.

Irish Rail has announced all services are running, but has urged customers to consider if their journey is necessary.

If this is an orange warning for Limerick, I pity anyone in Cork, Kerry and Clare. Just after 6am and it is wild #StaySafe #StormBarra

The rain is beating down here in Limerick. I pray that everyone will remain safe during this storm. #StormBarra

#goodmorning and #happytuesday from a stormy #limerick #ireland - although doesn’t seem to have been too bad - get focused and clear on today’s priorities and start by #POYOOMF pic.twitter.com/zHpri83yEn

The Council said: “Members of the public are being urged to ensure that any loose items in their property are securely fastened,” ahead of damaging gusts of up to 130 km/hr which are to be expected.

For more information on updates regarding Storm Barra, keep an eye out on the Limerick Leader.