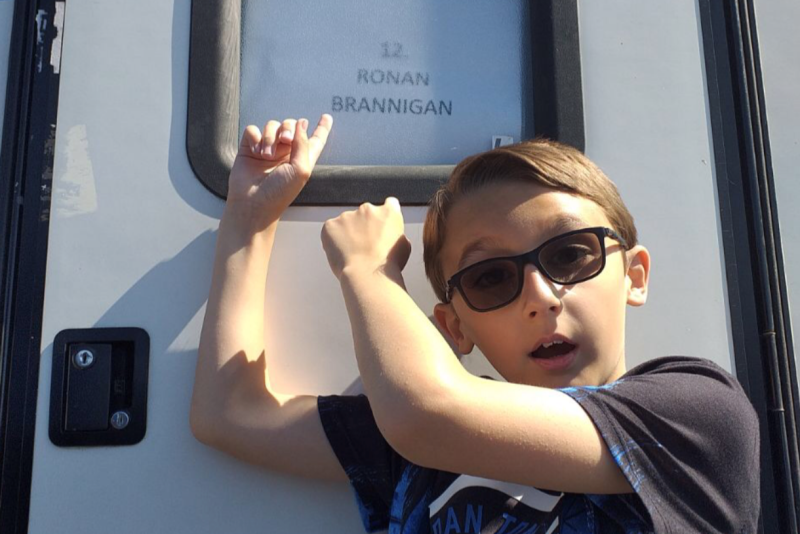 Hair and make-up: Limerick schoolboy Jared McNamara on the set of Hidden Assets

A LIMERICK schoolboy has left his classmates starstruck after appearing on the latest episode of RTÉ’s newest crime drama series.

Limerick city native Jared McNamara, who is just nine-years-old featured on Hidden Assets last Sunday night, playing the role of Ronan Brannigan at a dinner table scene towards the conclusion of the episode.

The fourth-class St. Brigid’s National School student in Limerick city was the talk of the school the next day as parents told him “What a charming young man he was on the telly.”

His mother Audrey told of her delight seeing her son on screen, after attending three days of filming with him in Limerick and Clare throughout the summer.

“It’s so surreal to see him on it, especially after us being there for each take. We got loads of messages and pictures from my friends and from parents in the school WhatsApp.

Our budding actor Jared McNamara got a great write up in the Limerick Leader this week. He was also on Live 95FM this morning Jared will be in this week's episode of Hidden Assets on RTE on Sunday night, after making his debut last Sunday. @Limerick_Leader @Live95Limerick pic.twitter.com/J7fRNYKKpq

“They are wonderful at St Brigid’s. The teacher emailed me telling me to send on a couple of pictures of Jared to put up on their Twitter page and to show after class.”

The pair attended shoots at the People’s Park in the city and the Strand Hotel, where they spent time with lead actress Angeline Ball and former Love/Hate actor Peter Coonan.

After each day’s shoot, Jared told his mother Audrey that he didn’t want to leave the set, as he was treated with such kindness by his co-stars. Angeline Ball sent Audrey an email telling her “what a wonderful son she has.”

Jared has been attending Nigel Mercier’s Limerick School of Acting for the last three years, following in the footsteps of his two older brothers who are also “acting and drama mad.”

Nigel, known widely for his work on Glenroe and Love/Hate, helped put Audrey and Jared in contact with Maureen Hughes, who is the casting director for RTÉ’s Hidden Assets.

“Jared is always the first to get up there and sing a song. He is very dramatic, even if he is telling a story. In the audition, Maureen said to him: ‘Do you want to be an actor?’”

“He said: ‘Well I’ll think about it.’ He totally played it down. That’s Jared,” Audrey told the Limerick Leader.

Jared will feature on episode three of Hidden Assets on RTÉ One this Sunday at 9.30pm.