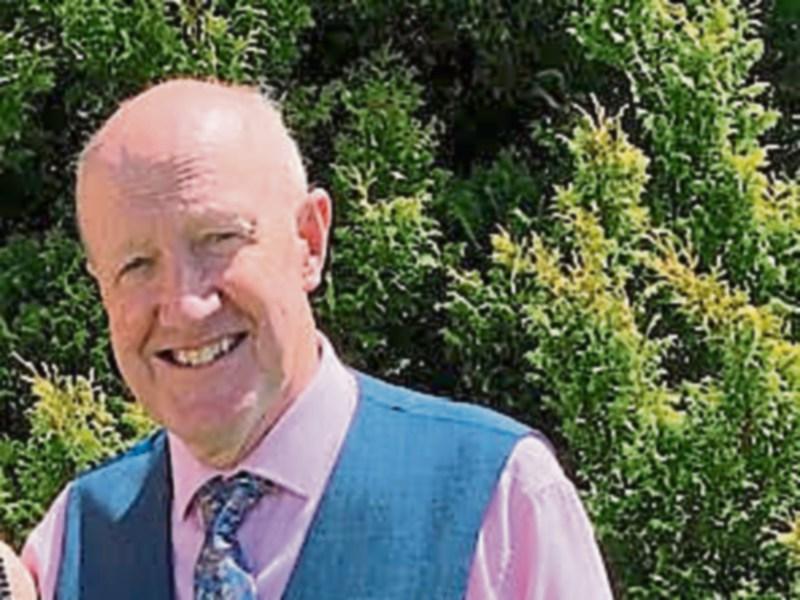 LIFE in Glenroe came to a standstill on Wednesday, October 6 when everybody came together to bid farewell to a man who, through his lifetime, was a titan of the local GAA club and the community, a force for good and an inspiration to all those around him. The firmament was grey and overcast reflecting the mood of those assembled below.

David Martin McCarthy had passed away the previous Sunday after a short and brave battle with a terminal illness.

Dave left an indelible legacy and imprint on his community which he loved, led and served so faithfully until the Almighty decided it was time for him to go and that his recent suffering should be brought to an end.

A man of innate charisma, Dave McCarthy was born to lead and his first involvement was as chairman of the first Youth Club established in the parish in the 1970s.

He was a leading member of the drama group and his ability for spontaneous laughter was infectious as was his ability to make others laugh with the various roles he was cast in over the years. His favourite parts were in John B Keane plays where he portrayed, with distinction, the musings of the legendary Kerry scribe.

One of his proudest moments on stage was in recent years when he was able to pass on the acting baton to his namesake son David and they appeared in the same cast.

He had a lifelong love for the GAA and it was no surprise that it found expression in involvement in Glenroe GAA where he was chairman for 13 years, 2003-2016.

We all have dreams but most hope others will fulfil the dream. Dave was a dreamer with a difference, he led from the front to make his dreams happen and that is what spawned the wonderful facilities that Glenroe GAA and the community have as his eternal legacy.

His approach to providing the GAA pitch, the dressingrooms and other facilities at the grounds was creative and innovative in that he sought to do it by voluntary labour and spectacularly pulled it off.

Dave cajoled and charmed people into getting involved in something many had no notion of doing, and did not want to, but such was his persuasive way, he could not be refused and people felt good about helping him out. He was able to inspire those around him, it was his second nature, he was a perfectionist who steadfastly refused to accept second best in anything.

Dave differed with people along the way but always sought consensus, he never claimed a monopoly of knowledge on anything and was always happy to take on board the ideas of others and infuse them with his own.

One of Dave’s proudest moments in the GAA was he sitting with the rest of his family in the stands in Semple Stadium, Thurles watching his son David playing a starring role as Limerick were crowned 2015 All-Ireland Under 21 Hurling champions.

On the morning of Wednesday, October 6 last, the cortege left Kilcruig to make the three mile trip to Our Lady of Ransom Church in Dave’s beloved Glenroe. On the way it detoured to the GAA grounds where it was met at the start of the short drive from the road to the grounds by flag bearers Veronica Farrell and Colette Frewen who flanked the hearse on the last leg of the journey to the citadel that is Glenroe GAA grounds, Dave’s dream and forever a shining shrine to his memory.

At the grounds, members of the GAA club, people who worked with Dave in different organisations and members of the community turned out in force, forming a guard of honour in dignified silence and struggling to grapple and understand that someone who was such an integral part of the club and the community was gone and taken so quickly.

The hearse moved slowly through the guard of honour around the spacious car park before stopping in front of the clubhouse which was Dave’s dream and which he inspired to become a reality.

In a poignant moment, the three flags - the Tricolour, the Limerick, and Glenroe flags which stand imposingly in the middle of the car park were lowered to half mast in unison by the three McCarthy brothers, Daithi, Eamonn and Pajo, first cousins of Dave.

Immediately, well-known intercounty referee, Johnny Murphy, a club colleague of Dave’s, sounded his whistle for a moment of reflection, the silence only broken by the tweet of the birds and the rustle of the leaves.

At the sound of the second whistle, the pall bearers prepared to take the club chairman of 13 years, the man who spearheaded the provision of the state-of-the-art facility he was now leaving for the last time. In relays of six, Dave was carried on the final 600 metres to the local church for a solemn requiem.

At the end of the requiem his son Diarmuid, in a moving eulogy, recalled his father’s love of family, his late brother and two sisters and how close they were and how he handed that down to his own family.

Diarmuid said his Dad and Mam were a wonderful team throughout their lives. He recalled how his home was always a hive of activity having a young family growing up and involved in many aspects of the community. “Dad was external but Mam, who fully supported his community involvement, worked tirelessly in the background; even GAA-wise, Mam was doing a lot of work, the two of them really worked well together”.

“Dad was a brilliant teacher” Diarmuid said, “At home, he was always interested in whatever we were doing school-wise or project-wise. Dad was excellent at analysing a problem and guiding us through the process. In the GAA club, he was a good teacher of people, he would help and nurture new committee members, he was great to bounce ideas off and put you on the right track.”

Diarmuid recalled how his father dealt with the news that he was terminally ill, “he was accepting of it and at peace with it and he made everyone around him more at peace because of the way he dealt with it. He was thankful for the life he had and did not reflect on the serious illness he had as a young man. Reflecting on how he could have died at 19 but didn’t, he said I have a wife and five kids and grandchildren, I have had a great life.”

Dave was a loving husband to Mary, father to Diarmuid, Justin, Stephen, David, and Maria, grandfather to Rebecca, Liam, MJ and Alex, brother to Mary and Bríd, father in law and uncle and friend to the entire community.

David McCarthy was laid to rest in the family plot in Glenroe cemetery, a puck of a ball away from the wonderful legacy that he has left behind.

I never will forget him

For he made me what I am

Though he may be gone

And I miss him, the old man