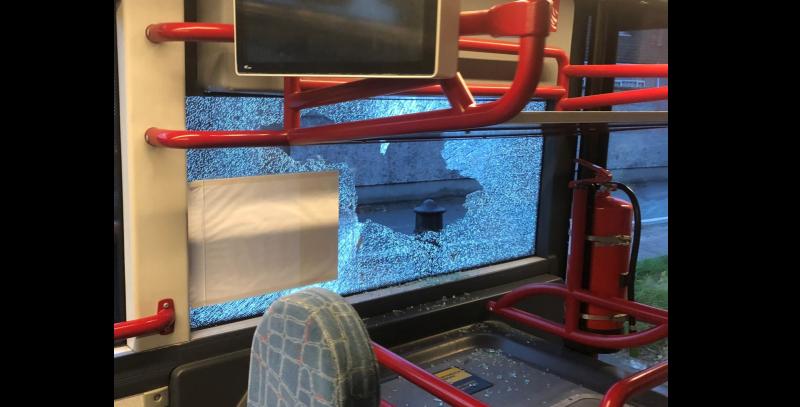 GARDAI are investigating an incident of vandalism in which objects were thrown at a city bus, smashing a number of windows while passengers were on board.

Passengers travelling on the 6pm 304 bus were alerted to the sound of glass shattering on Monday evening last.

“I was so shocked because I was sitting literally inside the window and it was so loud, it terrified everyone. Everyone began to move seats,” said UL International student, Tiara Salsabilla, who was returning from shopping in the city when the incident unfolded at the Mulgrave Street / Garryowen bus stop last Monday evening.

Limerick native, Christine Freeman, who was also on board the bus at the time said: “I was sitting at the back of the bus and the next thing a woman was pushing in beside me and I looked up and saw an old man up towards the front with glass coming in on his head.

“It’s disgusting behaviour. I’d almost be afraid to get on the bus again after that”.

One city worker who witnessed the incident unfolding said those responsible looked to be as young as 13-years-of age.

In a statement Bus Éireann said they “very much regret the impact of this incident on customers and employees.  Thankfully, no injuries occurred. The incident was reported to An Garda Síochána and Bus Éireann is cooperating fully with garda enquiries.”

The statement continued: “Bus Éireann does not tolerate any act of aggressive or abusive behaviour towards our staff, customers or property. We continue to invest significantly to deliver our commitment to provide a safe and secure environment for all our employees and customers who use our services.

“Although we have very few reported incidents of anti-social behaviour, of which about half relate to property damage, Bus Éireann takes each incident very seriously.  All are investigated by Bus Éireann in liaison with An Garda Síochána as necessary.”

All vehicles, they said, are fitted with internal and external CCTV cameras, and drivers have a direct communications link to control centres, and can immediately alert a supervisor, and the gardaí if required, to any issues that may arise.

“In the rare event that there is a need to curtail services due to antisocial behaviour and related risks to others, then we make that regrettable but necessary decision.”

Customers can also report any incidents to gardai, to the driver or to the Bus Éireann customer care line on 1850-836-611.

“In addition, all Bus Éireann city and town buses are fitted with driver security screens. Security personnel are employed in our larger bus stations and extensive CCTV is also in operation throughout all stations to ensure the security of our staff, customers and property,” the statement concluded.