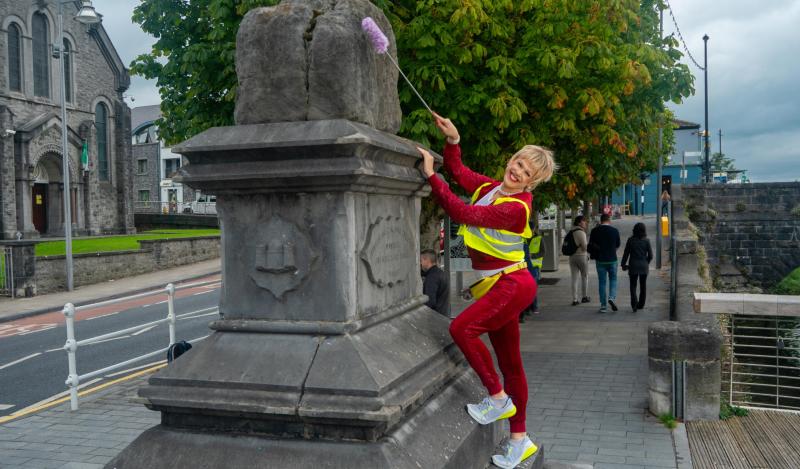 A NEW anti-litter comedy campaign has been launched in Limerick to deliver a serious message in a light-hearted way.

Launched by I Love Limerick and Richard Lynch, the six-part film series, 'Shannon Banks', stars Richard as titular character Shannon, a 57-year-old Limerick Tidy Towns volunteer with a sharp tongue and a great love for Limerick.

In each episode, Shannon Banks takes her audience to famous Limerick landmarks in an effort to keep them neat and tidy, including King John's Castle, the Treaty Stone and various Limerick monuments such as the Terry Wogan and Richard Harris statues.

Richard Lynch told I Love Limerick that the idea for the character Shannon Banks came from his own desire to keep the streets of Limerick clean.

"I just don't understand why people destroy their own city, where we live, eat, play, and work," said Richard. "I wanted to create an anti-litter campaign that delivers an important message, while also showcasing the best of Limerick and having a bit of fun."

Each sketch focuses on a different element of litter such as plastic, cigarettes, chewing gum or dog poop. Tidy Towns warrior Shannon shows no mercy when she comes across a litterer at one of her beloved city landmarks, lecturing and lamenting them on their bad habits.

"I hope people find the message of love at the heart of each episode. Even though Shannon Banks is a bossy person, she also has a heart of gold and really loves Limerick," tells Richard.

"Writing the series took a couple of months by the time we figured out what we wanted the message to be and how we were going to deliver it," Richard reflects.

"From there, a lot of people were involved in the filming process. The series was complicated to shoot as it was all outdoors, with people regularly passing the set. It was a challenging shoot, but so worthwhile as we feel we really achieved our goal."

Richard was thrilled when Denis Allen, who co-wrote the Limerick anthem, 'Limerick You're a Lady', allowed the track to feature as the 'Shannon Banks' theme song in each episode's opening titles.

"This song will always hold a special place in my heart and without a doubt is one of Limerick's most famous and beloved songs," Richard acknowledges.

While it is a comedy series, 'Shannon Banks' also has an important message that should ultimately be remembered - 'Love Limerick, Don't Litter'.

"We want those who watch the series to feel pride in their hometown. Shannon's tagline at the end of each episode is 'Let's Keep Limerick a Lady', and that message is at the heart of what we hope to achieve. We want people to see that littering is not cool, it's trashy. Let's not trash Limerick's future," declares Richard.

Richard, the 'Shannon Banks' crew and I Love Limerick would like to dedicate the comedy series to Helen O'Donnell, Limerick Tidy Towns Chairperson, Limerick litter hero Mohamed Ferhat and all volunteers who work tirelessly to make Limerick a brighter, cleaner and more beautiful place to live for all.