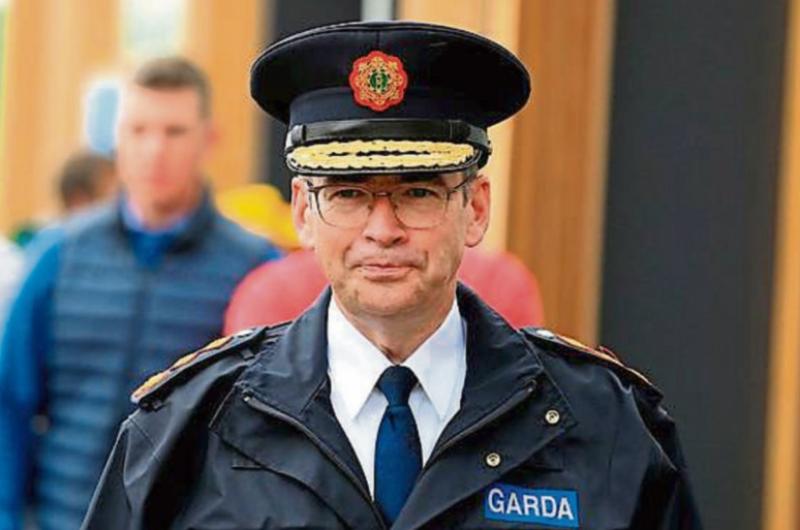 THE Garda Commissioner has defended the ongoing so-called ‘corruption probe’ into gardai attached to the Limerick division after hearing a Government TD claim that it “is tearing many lives apart”.

In Ennis to address the Clare Joint Policing Committee (JPC), Drew Harris said he understands how a crime investigation is stressful for members of the force “but this work must be done”.

Asked to respond to comments made by Deputy Cathal Crowe on the impact of the investigation into the alleged treatment by certain gardai in the Limerick garda division of fixed charge penalties, Commissioner Harris said: “We must make sure that people can trust An Garda Siochana to be entirely trustworthy and honest in their dealings with them.”

He said: “Any of these investigations we undertake are essential for public confidence in the organisation but also that they are expedited and dealt with as quickly as possible.”

At this week’s meeting, Deputy Crowe told Commissioner Harris that he has to move the investigation on “and needs to engage with this more effectively”.

Deputy Crowe said eight members of the force in Limerick have been suspended as part of an investigation by the Garda National Bureau of Criminal Investigation “concerning a charge of corruption against many in the Limerick garda division”.

He claimed that 60 gardai in Limerick are being investigated over the alleged ‘squaring off’ of fixed charge penalty notices.

Deputy Crowe told the meeting that the probe “encompasses too many people and is harrowing for the families involved”.

The Fianna Fail TD told Commissioner Harris that many of the gardai are young gardai and are unable to progress in their career and transfer back to the station in their home patch “because there is a cloud of suspicion hanging over them”.

Deputy Crowe said: “This is tearing many lives apart and you as a commissioner need to engage with this more effectively.”

The deputy said he was not condoning a culture that may have existed “in the past” whereby a county hurling star or a politician was pulled over by a garda and fines were waived.  “That was wrong and I get the reason why An Garda Siochana want to curb that”.

On the issue of discretion, he added: “The reality was that for many years, gardai were able to square off a charge for a road traffic offence, that seems to be gone now in the Limerick garda division.”

Commissioner Harris said he was constrained in what he could say in response to the comments.

He told the meeting that he took very seriously the comments concerning the expediting of the investigation.

Speaking generally, Commissioner Harris said a process is in place where Fixed Charge Penalty Notices (FCPN) can be examined.

“The difficulty is the difference between discretion and preference. I would say to every member of An Garda Siochana that properly exercised discretion is available to you but make sure that it is not preference,” he said.

“Preference is unfair - everyone must be treated equally before the law,” he added.

Asked what impact recent incidents putting gardai in a negative light is having on the morale of rank and file members, Commissioner Harris said he has a basic duty to ensure that the organisation conducts itself well and that people have confidence in members of An Garda Siochana in terms of their treatment of all members of the public.

“When you are a member of An Garda Siochana going around your duties, it is very stressful to have colleagues that you work alongside, that you have a doubt about and it is my responsibility to support the vast, vast majority of gardai doing their job and to make sure that they are not working alongside people whose standards are not at the required level.”

Four serving members of An Garda Siochana and one retired member are currently before the courts accused of attempting to pervert the course of justice.

Investigation into Limerick-based gardai akin to a ‘witch trial’ – TD