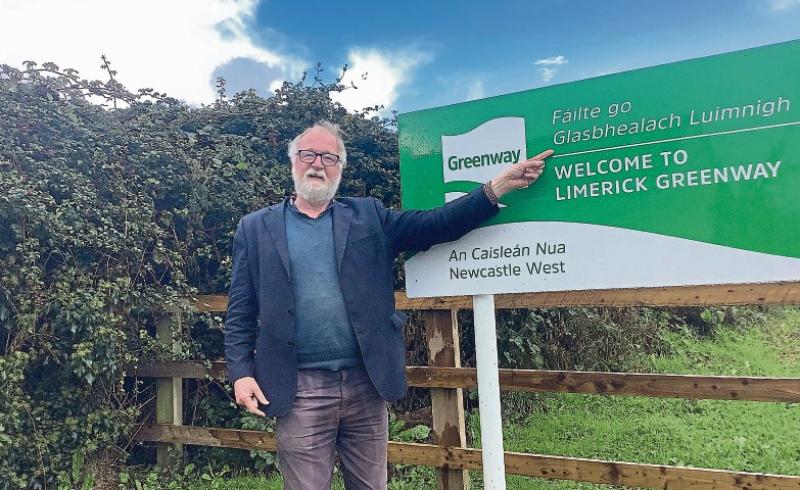 A HIGH-PROFILE councillor has expressed concerns about the use of the Irish language on signposts in and around the Limerick Greenway.

The walkway officially reopened this summer following a multi-million euro upgrade, but Newcastle West polltopper, Independent councillor Jerome Scanlan, has described the use of language as “despicable” and “dreadful looking”.

The phrase ‘An Bealach Glas’ appears on some of the signage.

However, crucially, some of the new signage erected following its reopening, describes the greenway, as 'Glasbhealach Luimnigh’, something he has a major problem with.

A local authority spokesperson said: “We have a translation company that we’ve checked this with and they’ve informed us that ‘glasbhealach’ is the correct term.”

It’s something Cllr Scanlan acknowledged might be technically correct, but he says he has had complaints from many local Irish teachers.

“The language is bastardised. Bealach is a way. A greenway should be bealach glas. The description always comes before the noun in the Irish language, the adjective describes the place. I think it looks despicable – it’s dreadful looking,” said the former Fine Gael man.

“Someone told me it is the worst form of Google-ism. Teachers of Irish warn their students if they rely on Google for their translations, they can smell it a mile off,” he said.

Cllr Scanlan urged the removal of the large signs, and their replacement, pointing out that some of the older brown tourism signs carry what he feels is the correct term of an bealach glas.

“People do not have a problem with bealach, the problem is with the reversing of the descriptive in the name. It turns the thing on its head.

“To me, protocol and correctness are number one, and this is anything but,” he added.

He says he is not criticising the Limerick Greenway – “anything but”.

“We have a superb product in the Greenway, I wouldn’t want anyone to think we do not. But the little subtleties have been lost somewhere,” added Cllr Scanlan.

Re-opened during the summer, the Limerick Greenway carves a 40km path through the local countryside.

It follows the old Limerick to Kerry railway line, linking Rathkeale and Newcastle West and on into Co Kerry.