BREAKING: Teenager and mother reunited with family in Limerick after dramatic escape from Kabul Airport 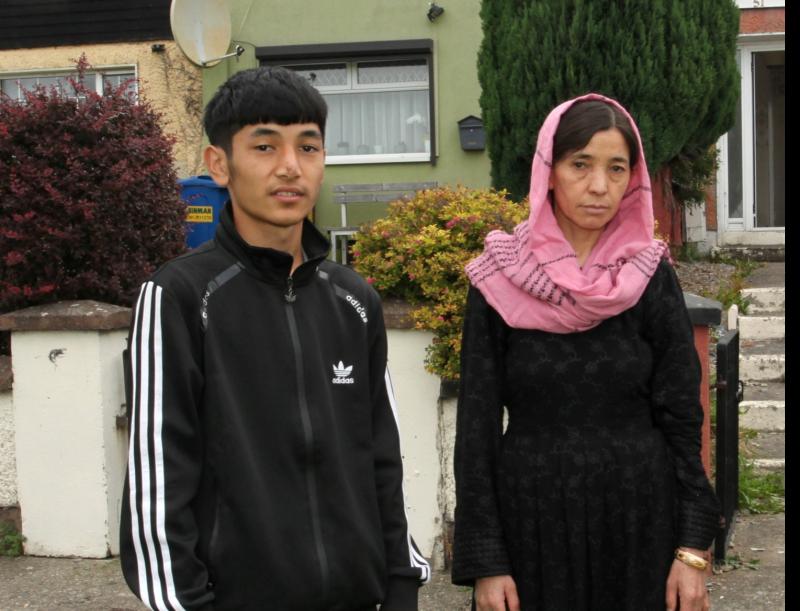 AN Afghan teenager returned to Limerick with his mother this Friday morning after making a dramatic escape from Kabul Airport.

Fazlahamd Saay, 16, and his mum Najiba landed in Dublin Airport at 2:30am before being driven back to Limerick.

"It was hard to see. There were a lot of people who had children who were trying to get out. I felt really sad for them," Fazlahmad told the Leader this Friday afternoon in Limerick city.

The teenager had travelled with his mum on August 4 to visit family in Afghanistan, which this month has been taken over by Taliban forces.

It was the first time since they arrived in Limerick two-and-a-half years ago that they were able to visit home, due to the restrictions on travel as a result of the Covid-19 pandemic.

But just 10 days after their arrival, Taliban forces began to take over the country, as Britain and America withdrew troops.

This led the pair to face a battle to escape their homeland, while their father, Salim, a lecturer at the University of Limerick (UL) watched on helplessly from the family home at St Lawrence Park in the city.

"For the last two-and-a-half years we have been here. My wife Najiba wanted to meet her sisters again. For her and my child, it was her first trip. She was waiting for the second vaccine. So when she received it, we were able to arrange the trip," he said.

Mr Saay admitted he thought the Taliban takeover was coming, but he did not expect it to happen so quickly.

Fazlahamd and his mother tried to return from Afghanistan on August 14, but were unable to do so, with the capital Kabul falling just days later.

They were then faced with switching houses between different relatives and friends on a regular basis, as the Taliban searched homes.

Earlier this week, following lobbying from UL president Prof Kerstin Mey and assistance from the Irish government, including local TD Niall Collins, the mother and son headed to Kabul Airport once again.

Fazlahamd, a student at Sexton Street CBS, recalled how they left their family home in Afghanistan for the three hour journey, taking backstreets in order to avoid security checkpoints.

When they eventually reached Kabul Airport, they had another agonising 12 hour wait until they were able to get on a flight.

"It took a while to find a soldier. In the crowds, we were walking through to gates, but they were crowded. Eventually, we found an American soldier, and showed our passports and Irish immigration cards. When he saw these, he got us on the flight," the teenager said.

In order to get back to Ireland, the family flew via Georgia, Finland and the Netherlands, before landing in Dublin at 2:30 this Friday morning before being driven back to Limerick.

Salim still has family in Afghanistan and is concerned for their welfare, having lost communication with them.

"We don't know if they are safe or not. We are very worried. It's very hard," he added.

To see the land he grew up in being taken over by these forces is also very tough for Salim.

"I'm 40 years old. I worked in Afghanistan, I grew up in Afghanistan and spent 15 years teaching there. We were full of hope. It's so hard to see after 20 years, everything being demolished. People were the hope of Afghanistan and now they are leaving the country. Sometimes I don't want to look at the news, because it's just so hard," he added.

Salim praised the welcome he and his family have received in Ireland, having also lived in Estonia, South Africa, the Netherlands, Belgium, Germany and Finland in his time.

"This is a nice country," he said, "the culture suits me."

Sadly, he never feels he can return to his homeland.

"There's no hope any more in Afghanistan. We know there has been a big change. The Taliban, you know, when they see nice things, they just destroy them. They've destroyed roads, schools, different things."

Asked if he has any resentment towards the British and American governments for pulling troops from the territory, he said: "I think it was a big opportunity for Britain and the USA to have land in the country. It borders China, Iran and Russia. It was an opportunity for the countries to have political influence in the area."

Minister of State for Higher Education Niall Collins said: "Every county in Ireland has an obligation to its citizens - and people who live here -  to protect them and safeguard them so it was a big humanitarian undertaking for government given the size of us as a state and given the resources we have available to us. The government had to use a lot of our contacts and goodwill from other countries like France, Germany and the UK in terms of partnering up and helping them with the evacuation."

"Part of what I was concerned about was that the narrative was to do with Irish citizens, which is fine. But there are also people like Salim who live here and have a right of residency here and they would have been lost in the narrative."