Limerick Person of the Month: No masking the generosity of TY students 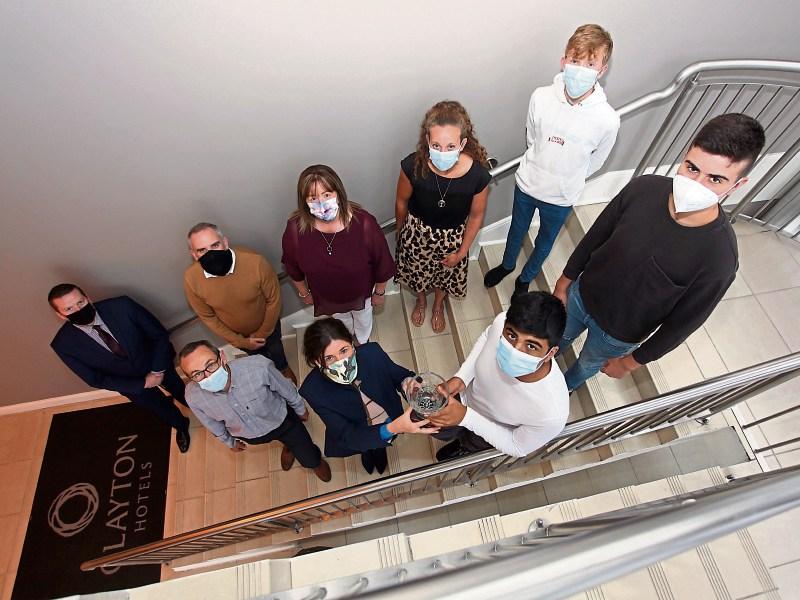 A GROUP of students who donated the profits they made from their face mask mini-company to help St Camillus’ Hospital, have been named the Limerick Persons of the Month.

Last year, the TY enterprise class  at Thomond Community College in the city recognised the need for face coverings for all students and staff. As a mini-company the students decided to develop their own set of face masks for the school community.

“The students  usually enter the Limerick Student Enterprise competition. It was a little bit awkward this year with Covid. Normally you would break the class into maybe four or five groups and they would all have different projects to do but back in September and October with Covid we were wondering how we were going to sell or promote products with all the restrictions,” explained accounting and business teacher Diarmuid Kelly.

The students came up with the idea of selling face masks. After extensive market research they decided on the different mask types, incorporating the school crest or colours. And then with software they started designing the masks.

“We got on then to Boru Sports in Shannon. We designed the masks with them and after that the delivery came and we started selling them in the school to students and staff within the school and to parents and to others outside the school.”

The masks, Mr Kelly said, were “a great hit”, so much so that they had to do a second order. “And then Christmas was coming up and Easter after that and they looked at designing them with different themes. They came up with some beautiful designs. They had no problem selling them.

“We want to thank all the students and parents and everyone who supported it. They got to learn loads of skills from producing and designing the masks. They used their own software to design them.”

Having sold hundreds of masks, the students made a healthy profit and wanted to do something charitable for the local community. They came up with the idea of making a tangible donation to St Camillus’ Hospital for the benefit of residents.

“The students wanted to help people or an organisation in the area and one of the girls in the class mentioned St Camillus’,” said Mr Kelly.

“The students contacted St Camillus’ and asked them what they would like. St Camillus’ came back to them a week later and said ‘we are after buying half a dozen tables for outdoors but we’ve no parasols’ so that’s where the parasol idea came from and we had extra funding then and we said ‘would ye be interested in getting some gazebos?’ So they bought a couple of gazebos as well.”

The presentation to St Camillus’ Hospital was made in May.

“We met some of the staff and one of the residents was there and he got very emotional over it - that the students would think of them.

“He said it was great because they often sit outside with relatives due to the Covid restrictions. He was so appreciative.”

The students, Mr Kelly said, could have split the money between themselves but decided to look beyond themselves for a deserving cause.

“That option was there - to keep the profit, but they didn’t. They would have made a nice few bob each.”

Alan Hastings, 16, said he and his fellow students were very happy to do something special for St Camillus’.”

Orestis Smalis, 16, and Muhammad Khizar, 15, also said they were “happy to give something back.”

Massively proud of @ThomondCommColl TY Enterprise students named @Limerick_Leader Person of the Month. A fantastic bunch of students who made a wonderful donation of parasols & gazebos to the residents at St Camillus. #givesomethingback #communityspirit. @LCETBSchools pic.twitter.com/IQv28GWWHx