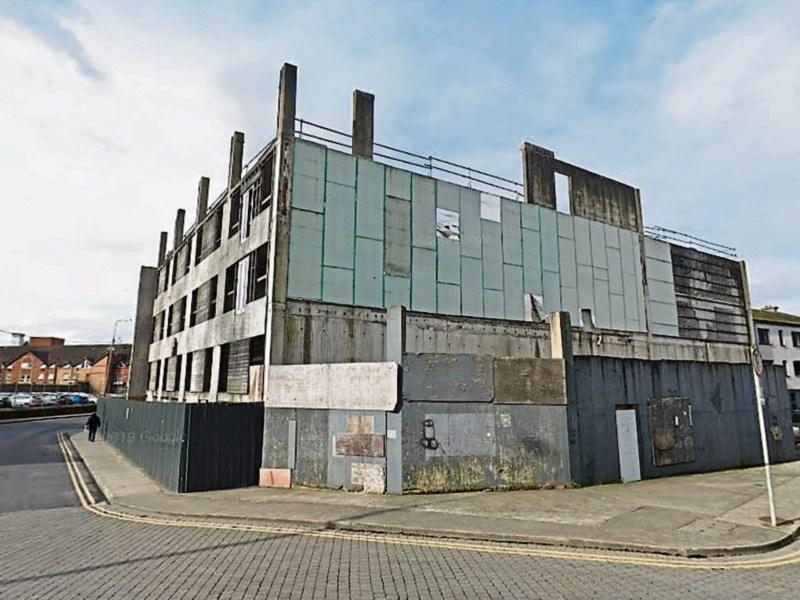 The multi-storey structure near the Milk Market

AN Bord Pleanála has rejected the proposed acquisition of a multi-storey structure in the city centre which has been derelict for over 15 years.

The structure – at the junction of Ellen Street and Carr Street – was placed on the Derelict Sites Register in February 2018 and in November of last year the local authority began the process to CPO the property.

The building, originally earmarked as a multi-storey car park, was previously the subject of a court-sanctioned demolition order which was later overturned on appeal.

In its objection to the proposed acquisition, the company which owns the property stated it acquired it in 2016 and was subsequently granted planning permission to develop a “seven-bedroom guest house” at the site.

A condition of those works proceeding was that the structure be strengthened first.

In its submission to planning inspector Pauline Fitzpatrick, the company stated it has spent around €120,000 “installing 18 tonnes of steel and 20,000 engineered concrete blocks” for strengthening requirements” but that progress has been delayed by Covid-19.

It also submitted the site “cannot be classed as ruinous, derelict or in a dangerous condition as it is comparable to any construction site and is maintained daily”.

In her report to the board, Ms Fitzpatrick said the site had a “neglected, unsightly and objectionable appearance from the public road and the surrounding area,” when she carried out a site visit on May 10.

She noted there was no construction activity taking place on the day despite the full reopening of the industry following the easing of restrictions.

However, she added that having viewed various photographs she was satisfied that some remedial works have been undertaken at the site since 2016.

Recommending that the proposed CPO be refused, the inspector commented that it would be “appropriate to provide further time for the site owner” to carry out the development which was granted planning permission less than two years ago.