Don’t quack up! 60 ducklings have new home in Limerick village 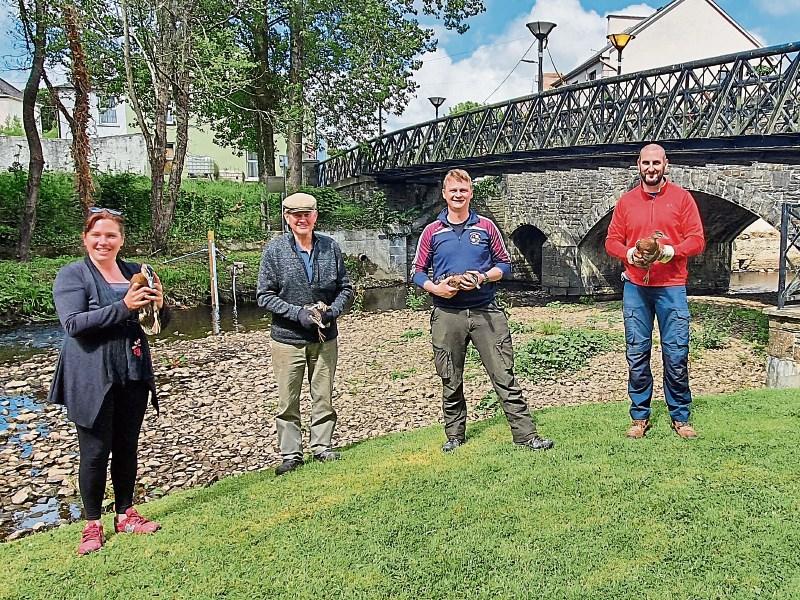 A bird in the hand...Helen Barry, Jerry Brouder, Raymond Brouder abd Colm Leahy, members of Athea Gun Club with a few of the new ducklings who are a finding a new home on the Riiver Gale

SUMMER got off to a quacking start in Athea, thanks to the arrival of 60 ducklings who are now making their new home on the River Gale.

The seven-week-old Mallards are the gift to Athea of the Athea Gun Club. It is, says Damien Ahern of the local Tidy Towns Committee, part of the restocking the club does every three years or so.

But, he is quick to point out, the ducks are not for shooting! Instead, they are there to add to the biodiversity of the parish. “We are trying to make full use of the river and its beauty,” Mr Ahern said.

The regular restocking is necessary, he added, because not all the ducks are likely to remain in the village area, although some do.

The Gale’s new residents were released near the bridge with a little help from locals over ten days ago and Helen Barry from Batts Bar has again volunteered to feed them regularly.

“They are a big draw and the children love going down and feeding them,” Mr Ahern said. But he cautioned against feeding them bread.

“We don’t want people to feed them bread. Bread is not good for them and it also occludes the water,” he said. “If you are feeding them, use only oats, barley and peas.”

Little packets of duck food are on sale locally in Collins shop and the proceeds from these will be used to pay the costs of daily feeding.

Meanwhile, the Tidy Towns Committee is also planning a further improvement to the riverbank. The footbridge which was erected and paid for by the local community is to get a facelift under the Town and Village Renewal Scheme. Over the coming weeks, the bridge will be sandblasted and then repainted in maroon, the parish colour.