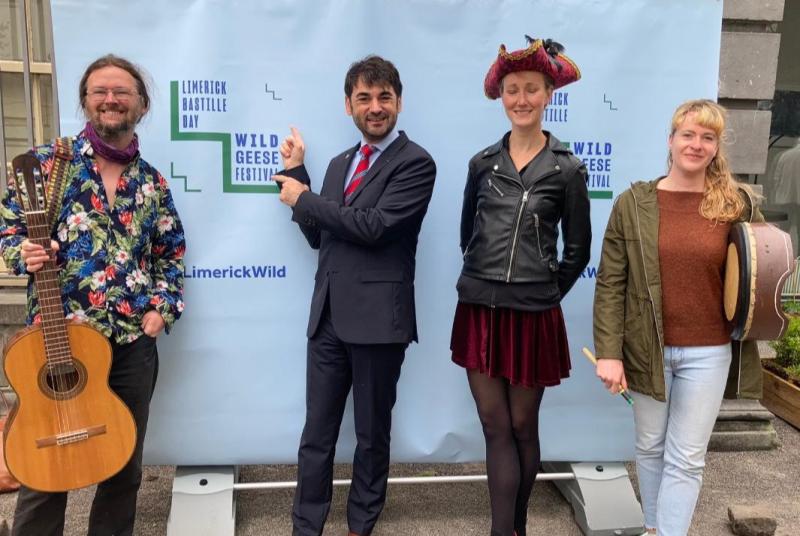 A MAJOR step on the road to the return of normality takes place this weekend with the first festival since the onset of lockdown.

From this Friday, July 9 until Sunday, July 11, Limerick will mark the Flight of the Wild Geese with a number of public events in the city.

Launched in 2019 – before taking a break during 2020 – the festival is timed to coincide  with the weekend closest to France’s Bastille Day.

And the newly appointed French ambassador to Ireland Vincent Guerend is set to make his first visit to Shannonside to join in the fun. He will unveil a plaque in honour of the women of Limerick who fought during the siege of 1690.

On Friday, the festival will be launched at the Milk Market with a mini-market and a free gig by Clare-based band Los Paddys. It will be followed in the evening by the inauguration of the Wild Geese Museum in the old St Munchin’s church on King’s Island.

On Saturday July 10, a living history camp will be set up in the new gardens of the Hunt Museum by reenactors from En Garde, the Franco-Irish Historical Society, who will bring back to life Napoleon Bonaparte’s famous Irish Legion. There’s also an opportunity to do a guided walking tour of the city centre with local historian Dr Paul O’Brien.

All events will be free but, due to the pandemic, numbers of attendees will be strictly limited.

UNBELIEVABLE! All of our tickets for Sunday’s event @KingJohnsCastle sold out in just THREE minutes!!! We’re so happy with the level of interest in our festival & we share the frustration of all those of you who couldn’t get a ticket due to Covid restrictions on numbers 1/2 pic.twitter.com/3FDuWnGBUz

Mr Guerend believes Limerick can benefit from having more connections with French cities and vice-versa, and he hopes the festival kick starts this.

“We really want to see Limerick entrepreneurs being interested in France as a large economy in the single market which is attractive to business. We also want Limerick to be on the radar of French traders,” he said.

New Limerick museum to mark the flight of the Wild Geese