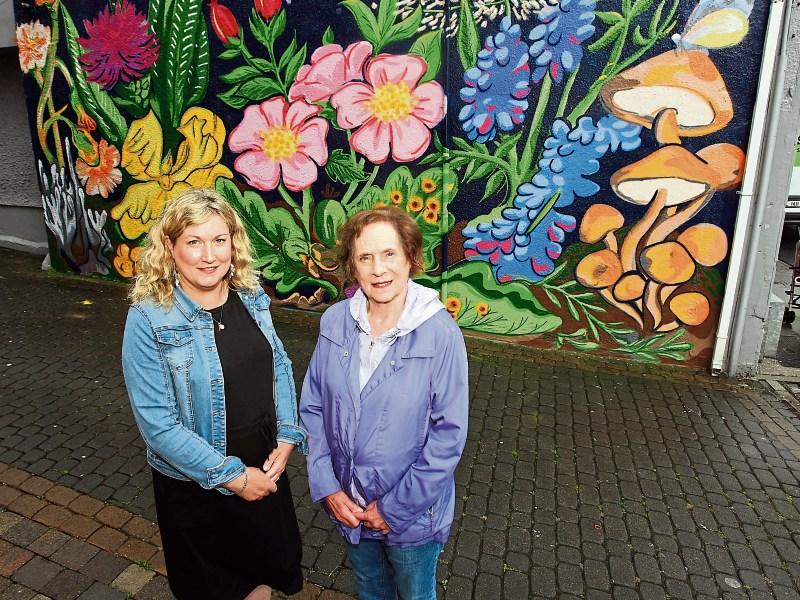 A GREY gable wall in Newcastle West has been transformed into a dazzling mural, popping with vibrant colour. The mural is the work of two young artists, Limerick-based Lulu Keeley and Newcastle West’s Sinéad Nix and was commissioned by the local Tidy Towns Committee.

The inspiration for the mural, on Bishop St, came from another project undertaken by the Tidy Towns committee, an extensive biodiversity survey carried out by Geoff Hunt. And the hope is that it will secure extra points for the town in the upcoming Tidy Towns competition.

“Our idea was we wanted to do some public and we kept looking at this wall and decided this is the place, we could really do something here that would hit people,” explained Vicki Nash, chairwoman of the Tidy Towns Committee.

They approached Darragh Goggin of Goggin Insurance, whose building it was and he was enthusiastic about the project, Ms Nash continued. “We were anxious to do it with somebody young,” she added, and Lulu and Sinéad proposal ticked all the boxes.

Lulu explained that she was impressed by the biodiversity survey, a “substantial amount” of work, and felt it was probably the best basis for their proposal. “It is using local flora and fauna to educate people,” she explained, listing dog rose, oak leaf, iris and various fungi among those featured in the collage. It is also going to be interactive, she added, with a QR code that people can use to access the information.

She designed the final drawing and then she and Sinéad painted it on the wall, using a grid system and their mobile phones.

“It was quite fast,” Sinéad explained and took about four days to complete, although the high sun of the past week did cause some difficulties.

The two artists got great feedback from the public as they worked and are happy with the result.

“I am pleased,” said Lulu. “Everyone loved it. It was fun to do and I learned a lot too. It is nice when people appreciate what you do.”

The positive comments were that it was something colourful, something nice to brighten up the town. “Colours and flowers are good for the head,” Lulu declared. And she would be keen to take on other walls.

Meanwhile, another group of local young artists will, in the coming weeks, be adding even more colour to ESB minipillars around the town. Calling themselves the Newcastle West Satellite Studios, the young people are all members of Foróige and have done various workshops in preparation, including a graffiti workshop. Each of the eight young people will get a chance to create their own design, reflecting their youth and interests, explained Foróige youth workers, Elaine Willians. Funding has come from Limerick City and County Council and they will work with local multimedia artist Míchéal Rowsome.

“Tidy Towns needs youth involved,” Vicki Nash said. “We had talked about doing some projects and now this year it has really taken off. It should make a big impression.”Copies of the Newcastle West Biodiversity Survey, sponsored by Cois Sionna Credit Union, are available for sale and cost just €5.

The scientific names are given along with their common names in both English and Irish.