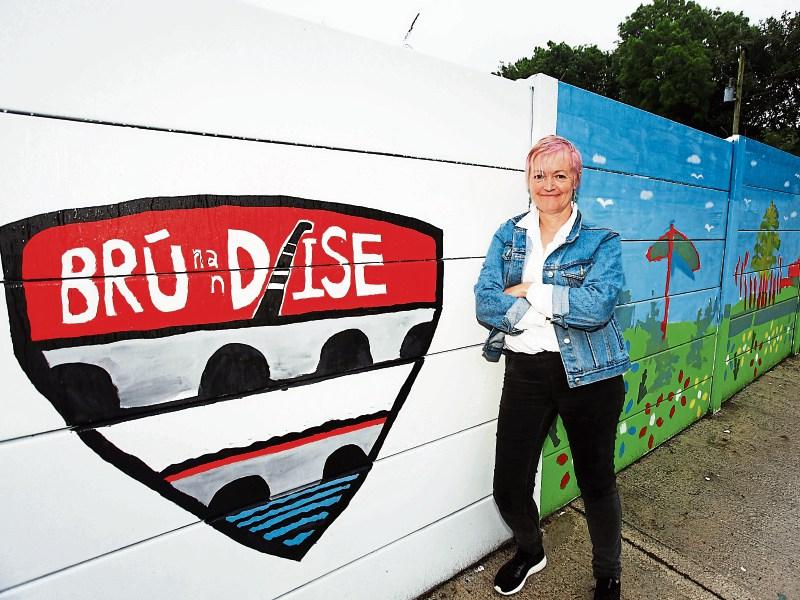 THE town of Bruff has literally expanded overnight thanks to some clever artwork and a huge community effort.

What started out as improvement works on a footpath has ended up in a colourful new streetscape along the Limerick side of the town.

“When the footpath was being upgraded, the wall virtually collapsed and had to be demolished and replaced by 46 sections of concrete panels and each panel would be six foot wide,” explained Maurice Lyons of Bruff Tidy Towns.

The Tidy Towns committee put a proposal to the council to decorate the panels and they provided the paint.

“We put on a sealer and two undercoats. Kathy Tiernan, a local artist, with a few helpers  painted on a continuous scene depicting the town of Bruff with local logos etc. On either side of the gate is 'welcome' in English and Irish,” Maurice continued.

Kathy Tiernan was only too delighted to lend her talents to the project.

“I’m only over the road in Grange. There were a couple of old doors in Bruff so I painted windows into them. They just mentioned a wall - they didn’t mention how long it was,” she joked.

Kathy has recreated a number of the local landmarks including the church and the bridge.

“The Tidy Towns put a sealer on it which is a big job and they undercoated it twice with white paint because there is no point painting on concrete,” said Kathy, who is self-employed and also makes picture frames and runs her business, FairlyArt.

“They’ve gone up and down that wall several times and then there are two teenage girls helping out as well - it’s their summer holidays and they have taken time out and have done a really good job.”