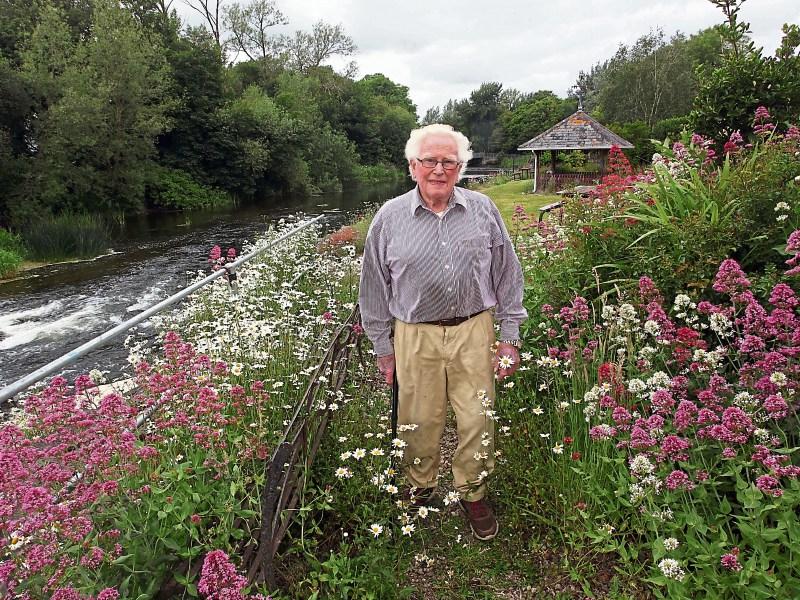 Age is but a number as Eddie O’Donnell credits long hours in the garden with keeping himself active daily at the age of 95 | PICTURE: Brendan Gleeson

OVER the past three decades, Eddie O’Donnell has been pouring energy and ingenuity into creating the garden of his dreams on the banks of the Maigue.

When he bought Caherass House in the early 90s, the house stood isolated in a wide expanse of lawn.

“There wasn’t a bush here” Eddie recalled this week. But he took on the job of turning his riverside home into a garden oasis, planting trees, setting shrubs, building terraces, installing a wishing well and creating and stocking his borders where roses, dahlias, hydrangeas, geraniums and lilies now vie for space. “I was always interested in flowers,” he explained. “My father before me was interested in flowers.”

Now going on 95, he is still an active gardener “I work seven days a week,” he explained. “I work very hard. I look after my grounds very well.”

Most days, he stays in the garden as long as there is light, sometimes up to 11 o’clock.

A man who had been working since he was 13, whether in construction or dealing cattle or running Caherass House as a guesthouse and restaurant, Eddie still keeps cattle on his land and is keep to promote wildlife and biodiversity.

“I am very interested in wildlife,” he said. “I feed the birds and I put the bird feeders out every day.

Over the past couple of years, Eddie has turned his attention to wildflowers and took up the challenge of providing more bee and wildlife friendly plants with his signature determination.

“I sprayed the grass, collected the seed off the flowers and I raked them into the ground,” he explained. This year, to his immense satisfaction, they have grown gloriously and in profusion.

Stretching along both sides of his avenue, flanked by meadow on one side and a new copse of trees on the other, are wide borders of wildflowers interspersed with trees and roses. Nigella and marigolds, poppies and valerian, cornflowers and ox-eyed daisies toss in the breeze coming off the river. And down by the river itself, Eddie has also begun to work his magic, piling up the bank with wildflowers.

Eddie’s garden is a haven of quiet and an oasis for bees even though he doesn’t keep bees. Or at least hasn’t done so up to now. “I often thought the honey here would be beautiful.”