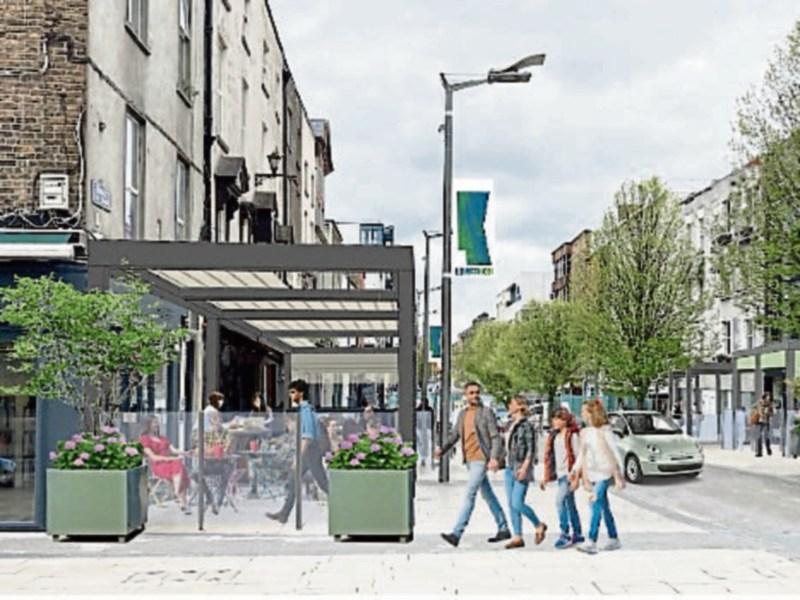 The new Limerick City ‘Outdoor Dining Experience’ project has been proposed by council bosses with al-fresco dining expected to be part of the local landscape for the foreseeable future.

Set for Bedford Row and Thomas Street, the local authority has promised “far-reaching” proposals, which will help by “encouraging life back into the principal retail streets” of the city centre.

The proposed works will see the installation of covered pergola structures with retractable roofs and toughened glass screens. These will create outdoor areas for dining.

On top of this, additional lighting, planting and street furniture is planned, with water bottle refill stations.

In another departure, so-called ‘smart bollards’ will be installed, which will include WI-FI, digital pedestrian and traffic management information, and environmental sensors. Solar powered compacting bins are planned.

Now open for public consultation, it will ultimately be up to metropolitan district councillors to approve the project.

In a briefing document, council listed what it feels are a number of benefits.

These include “facilitating year-round outdoor dining for the benefit of promoting tourism while meeting the needs of all its citizens.”

“The proposed project maximises the opportunity to strengthen the cultural identity of the city centre by building upon the attraction of the pedestrianised streets and creating a sense of place focused around local tourism and hospitality businesses,” it adds.

Council has highlighted at least 12 businesses which will benefit from the project, located in the two pedestrianised streets.

“Delivery of the outdoor dining experience project will complement the place-making objectives of national, regional and local planning policy by encouraging a more comfortable and appealing city centre,” it added.

The public is being encouraged to have their say on the plans ahead of a final decision later this year. More information: 061-556000.