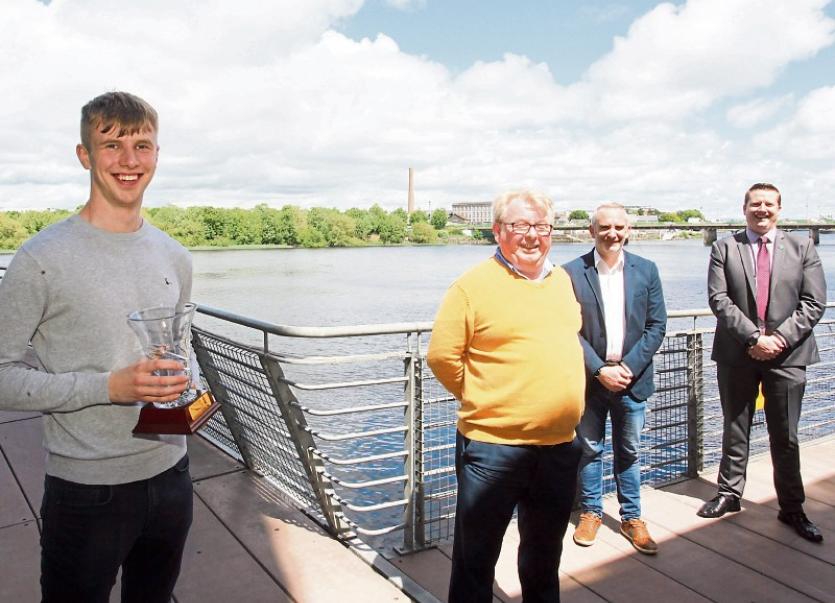 A BRIGHT, young entrepreneur whose “crazy curiosity about life” has seen him receive numerous awards - and represent Ireland at international level - has been named the Limerick Person of the Month.

Jack O’Connor, 22, from Kilcolman in West Limerick has, to date, been shortlisted for the Ten Outstanding Young Persons of the World (TOYP) Award by Junior Chamber International – which includes John F. Kennedy as one of its past winners.

Last year he was United Nations Youth Delegate for Ireland.

He is one of this year’s cohort on the Washington-Ireland programme due to take place across June and July, starting this week.

Sadly, due to the Covid-19 pandemic, the University of Limerick international business student will not be able to travel to the American capital to take part as all sessions this year are taking place virtually.

“I would absolutely adore to be over there. I think I’m on trip 13 that has been cancelled over the past year and a bit,” said Jack who was presented with the Limerick Person of the Month award at the Clayton Hotel.

Jack has always been someone who is incredibly curious about lots of different things.

“I think having that curiosity from a young age would propel me into these positions, not intentionally but I was just crazy curious to be honest. You could talk to me about anything and nine times out of 10 I’d have a genuine interest in it,” smiled Jack who is now living in Castletroy.

His greatest success to date has probably been his establishment of the social enterprise start-up Moyo Nua, which has won international business awards and featured on Forbes magazine.

Moyo Nua was started as a Young Scientist project when Jack was in sixth year at Desmond College in Newcastle West. He had qualified for the competition three times previously.

“I was chatting to my teacher Donal Enright and he had suggested that there were issues with smallholder farming in Africa,” Jack recalled.

“I watched a documentary in fifth year about it. There are a lot of significant challenges in farming in Africa so I put a few ideas together and settled on a hand held seed planter with its main function to eliminate the need for bending over. I entered it into the Young Scientist and was very fortunate to win the Science Development Award, sponsored by Irish Aid in 2017 when I was in sixth year.”

The prize included a trip to Malawi sponsored by Irish Aid.

Jack describes it as “a big moment and turning point in my life”.

Jack has since volunteered there every year apart from the past year because of the pandemic.

“From seeing it as a Young Scientist project which could help a couple of people to actually chatting with farmers on the ground and realising there is actually a significant need for it here was great,” said Jack of his invention.

After the trip to Malawi Jack entered Moyo Nua into the Enactus competition through in UL.

Just two weeks ago a group of students from Enactus UL competed against nine other Enactus colleges in Ireland to win the coveted  Enactus Ireland National Competition, making them the first ever team from the University of Limerick to be crowned the champions.

Moyo Nua was one of the two Enactus UL social enterprises that were presented at the national competition.

The winning team will be representing Ireland at the Enactus World Cup in October.

According to Jack it is now “all systems go” with Moyo Nua.

“We’ve just finished a pilot programme in Malawi with 100 farmers. We made a new prototype of the product.

“We are working with Goal Global and we got funding from the University of Limerick Foundation along with Citibank in Europe.

“I’m on a programme in UL at the moment called Student Inc to work to accelerate it as much as possible.”

While Jack says the project has been “a vocation”, this summer is about speaking to funders and “getting it to scale”.

Jack also speaks frequently about youth mental health and suicide prevention as he, like many, has experienced mental health difficulties in the past.

“I was around 20 at the time but I’ve come a long way in a short space of time which is important to acknowledge.

“I think everybody is good at painting a rosy picture but it’s important to illustrate the thorns in the rose also. It’s about normalising the conversation.

“There isn’t a single person who hasn’t gone through something like that - it’s just a matter of calling it what it is. It’s not the end of the world.”

Jack is the son of Donie and Dympna and has three sisters, Donna, Jennifer and Carmel.

When asked what his dream job would be, he simply replies “Moyo Nua”.

“Over 20% of my life has been with Moyo Nua,” smiled the young entrepreneur who is only just getting started.

The Limerick Person of the Month Awards are supported by media agency Southern, the Clayton Hotel and the Limerick Leader.