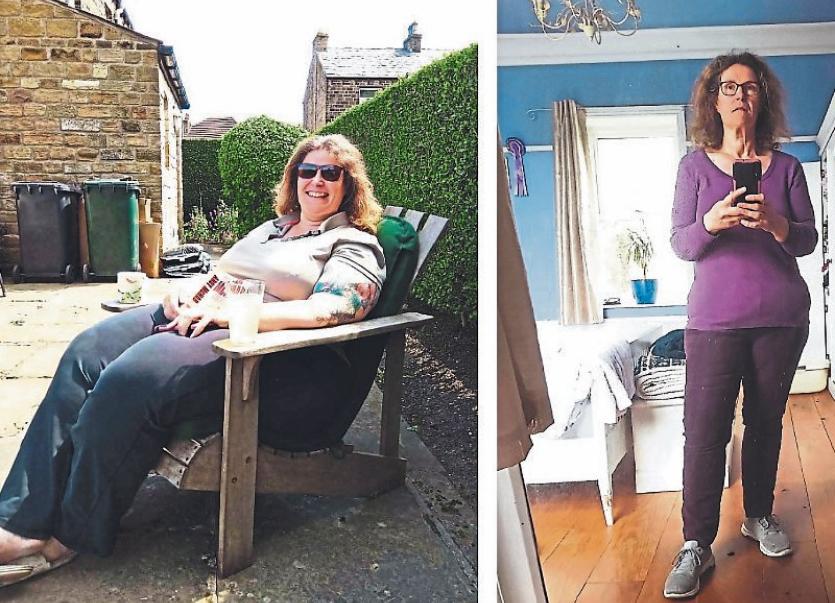 MANY of us have piled on the weight under lockdown but Heike Phelan has lost almost 200 pounds!

When Heike, who lives in the Kilmallock area, stood on the scales in April 2020 she weighed 28 stone. The 52-year-old admits she was “shocked” but has now lost half of her body weight.

“I look in the mirror now and often have to do a double-take because I can’t believe it’s me looking so much trimmer. I don’t think I’ve been anywhere near the size I am now since I left school. Generally I feel amazing. Both from the weight loss and the new routine of walking and exercise. It’s physical and psychological.

“I set out to lose a couple of stone to ease the pressure on my knees and joints, but the weight kept falling off so I kept going. I confess it became a bit of an obsession to keep going, although I never had an end goal weight in mind. Everything over the two stone I planned has been a bonus.

“My motivation had been to fit into a beautiful Barbour jacket and Dubarry long boots I had received for Christmas six years ago and never managed to wear. Now the jacket is much too big for me!” said Heike, who some will recognise from previous Leader articles on her marrying a US murderer serving 75-year sentence.

Weight became a problem for Heike after she had complications from a caesarean and couldn’t do anything for many months.

“After that, it was my total ignorance and lack of knowledge about nutrition that was the problem. Like many people, I had no idea how much I was eating in a day and thought what I was eating was fine," she told the Leader.

“I’ve been vegetarian for almost thirty years, so my meals have always been mostly healthy. It was always the amount I ate that was an issue. Chocolate, cake or desserts was always a problem. One chocolate bar wouldn’t be enough, so I’d have another. Buttercream on cakes was irresistible and ganache in chocolate – don’t get me started on that!” she smiles.

Heike says she has always been conscious of her weight and to some degree used it as a “convenient excuse not to do things”.

She says she wasn’t as confident when she was younger as she is now. "I used it as a reason not to bother with relationships. I found it hard to believe that someone would be interested in me. As I became older and more confident, I didn’t hide behind it, and didn’t let others judge me by it.”

Sadly, there is no secret to Heike’s remarkable weight loss.

“I started going out walking at the beginning of April 2020, and by the same time in 2021, I had lost just over 13 stone. I have lost another stone although it’s now infuriatingly slow. I have now lost half of my body weight. I started walking for thirty minutes each day, then over the weeks built up to forty minutes then an hour. An hour is my daily standard walk. At first I would have to stop and take breathers every few hundred metres. Now I can walk my standard walk circuit in almost half the time it used to take me."

Heike says as she lost more weight and got fitter, she increased speed or altered her stride to work different parts. "By September I started adding uphill and steps, both of which I would have actively avoided previously. There is a particular set of steps I do and there are ninety six steps. I am now up to being able to do thirteen sets before collapsing in a heap.”

Being vegetarian, Heike has always eaten a lot of Quorn – which she loves – vegetables and potatoes. I eat potatoes in various forms – mashed, roast, boiled, fried – probably four times a week; lots of different vegetables and fruit. I bulk my meals out with vegetables, which are generally very low in calories but very filling.

“Instead of eating large bars of chocolate most day  I had to learn to limit myself. I only have chocolate at the weekend, and only a small 28 gramme bar. I break it up into pieces and challenge myself to see how long I can make each piece last. That way I savour it rather than scoff it without even tasting it.”

So what does Heiki do during the week, if she wants something sweet? "I have a couple of the snack size boxes of raisins from Aldi, or a couple of  apples cut up into small pieces in a bowl with some Skyr on top. Skyr is great, it’s much lower in calories than yoghurt but just as creamy.”

Heike never has dessert or cake without it being pre-planned and factored into her day to allow for the calories.

“I make it a meal replacement rather than extra to a meal. I love fresh baked bread and butter and cheese. I don’t often have bread or butter any more, and only have cheese once a week. I will have a cheese and crackers evening and have five or six different cheeses. To stay within my calorie count, I will have lighter breakfasts and lunches, usually fruit or home-made soup and often do extra walking to burn more calories beforehand. That way, I can enjoy the splurge without feeling bad.”

They say it's one thing losing weight but it's another keeping it off. How is she finding that?

“I am still losing weight, although much more slowly now. I will carry on with the 1,430 calories a day until I go back to the day job (tour bus driver), hopefully in September. Once back, my lifestyle will be more active, I will raise the daily calorie limit.

“Recording everything I eat and my exercise is the key to maintaining and not putting the weight back on. I’ve used an app (myfitnesspal) to record everything. By doing that I have learned more comprehensively about food nutrition and maximising your calories. I will likely be doing that for the rest of my life. It’s habit now.”

Not that we should care about what the opposite sex thinks but what does her husband, who is in a Texas prison, make of the new Heike? They haven’t seen each other in person since Covid hit.

“William is and has been very supportive, although he thinks I have lost far too much. He now feels like he is letting me down and is on a mission to lose weight himself.

“I’ve also told my boss about my weight loss progress and he is astounded. He hasn’t seen me in person since lock-down so I’m looking forward to seeing his and the faces of my colleagues when they do. I’m only now – because a good friend keeps telling me how amazing it is – accepting praise for the achievement.”

The one bad thing about losing so much weight is the pounds of a different kind quickly start to add up.

”Although it’s a great feeling and achievement to have lost so much weight, it can end up being expensive to do so. I am slowly replacing clothes. It will be a large expense when I am able to get back to driving tours as I need enough tops and trousers for up to two weeks at a time. I’m OK with the size I am now, I can safely start buying clothes knowing I won’t change size much now.”

It’s a small price to pay.