War in the streets - 100th anniversary of the Dromcollogher Ambush 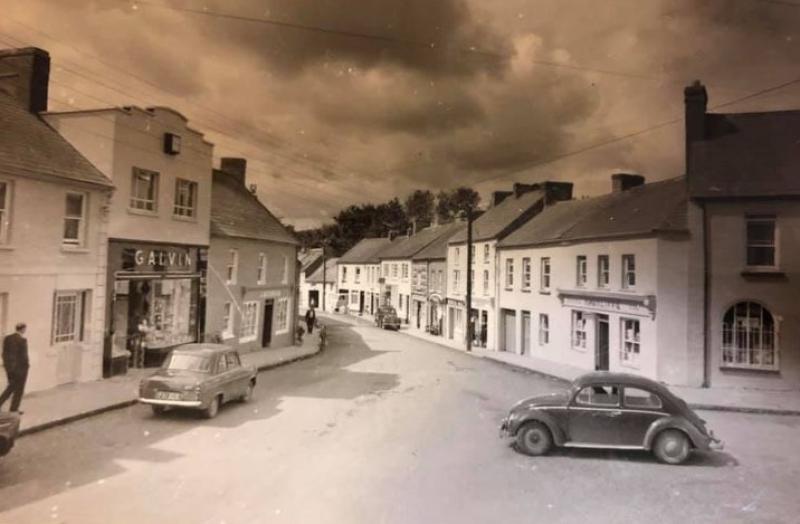 The shop that replaced Murray's was the fine premises run by John Galvin. Now of course Meaney's Centra Supermarket trades on this site | PICTURE: dromheritage.ie

TODAY marks the 100 year anniversary of the Dromcollogher Ambush, an incident from the War of Independence that took place on the streets of the village on May 14, 1921.

A patrol from the local RIC barracks (the former St Mary’s Secondary school on the Cork Road) is described by the Irish Military Archives as comprising of sixteen men, RIC, Tans, and Auxiliaries, armed, some with rifles, some with repeating shotguns, and some with revolvers.

An engagement lasting about two hours took place during which one of the leading file of the patrol was killed instantly.

By 1921, Active Service Unit of the 3rd Battalion, West Limerick Brigade had devised and attempted several ambushes but none had been successful until Con Foley took the Column into Dromcollogher on the night of May 13, 1921 in readiness for a planned attack on a patrol of Tans and R.I.C. at 6pm on May 14, 1921.

The column mobilised in Belville and marched to Dromcollogher arriving at 1am on May 14.The column separated, Ben O’Sullivan and ten men occupying a house owned by Paddy Quaid. Con Foley and another ten men occupied the upper portion of the restaurant owned by Lil Connors in the Square (formerly, the late Josie O’Carroll’s). It was about 2am by the time the column had settled down for the night.

On Saturday, May 14, 1921, the sun shone brightly and a beautiful morning broke over Dromcollogher. D.J. Broderick (Auctioneer) had a Bull Sale in Jack Kiely’s small field on the North Road.

About 10 am that morning three tenders of military and auxiliaries in full war kit appeared in the town. They placed machine guns controlling the exits from town, searched all those entering and leaving the town, searched some houses and backyards, and remained there till 4 p.m. when they left for their H.Q. at Newcastlewest.

Dan Liston from this section was dispatched down the street to take over the Post Office and prevent telephone communications with the outside world. Ben O’Sullivan led his men from Quaid’s house to occupy the public house run by Michael Ahern (now Tasty’s Chinese restaurant). Egan’s Pub (now the Kiely family home) on the west side of the Square was also occupied to ensure this house was open and clear to act as an escape route for the ambush party.

At the time of the ambush then, four houses in The Square had been occupied: Lil Connors’, Michael Ahern’s, the Post Office, and Egan’s.

It was the procedure for the local R.I.C. to get their milk daily supply from a vendor, Flor Fitzgerald, The Square. Each evening at about 6 p.m. a party of R.I.C. proceeded to the shop to collect the milk. This routine had been observed by the I.R.A. intelligence and an ambush planned on this basis. According to one observer, at about six o’clock a party of three R.I.C. constables Deegan, Roche and Bridges proceeded to collect the milk supply. On reaching the milk shop they knocked at the door. Ben O’Sullivan gave the order “Open Fire” and immediately from Michael Aherne’s, the I.R.A. opened fire.

In the first volley Constable Bridges fell dead on the street and Constable Deegan was wounded. The surviving two policemen fled. Constable Roche took shelter in an out-house of Denis Collins (near Coleman O’Kelly’s) while the wounded Constable Deegan ran towards the barrack. Two volunteers, Michael Sheehy and Michael Dwane who were armed with the two rifles that the ASU possessed, emerged from M. Aherne’s and ran across the Square.

Constable Deegan ran up the road in zig-zag fashion and twice the two armed men stopped and each fired two shots after him. They made their way across the Square to Egan’s pub, firing in turns on their way in the direction of the R.I.C. retreat to barracks. Safely in Egan’s where Garry O’Dwyer had secured access, they took up firing positions at an upstairs window of this house, one of the few houses with a clear view all the way to the R.I.C. Barracks on the Buttevant Road.

During the lull in fighting, Con Foley, O.C. emerged from Lil Connors and recovered a Webley revolver from the stricken constable. After a short while another patrol approached from the Barracks including Sergeants O’Connor, Stephens and the wounded Constable Deegan.

Sergeant Stephens returned to the dead man and searched his holster. The sergeant was not interfered with as it was hoped by the ambush party there he would bring along the remainder of the patrol into line of fire again. He evidently got suspicious as he signalled to the patrol to retreat. Fire was opened again by ambush party, and the sergeant and two other members of the patrol were wounded.

The enemy patrol retired to Barracks firing at ambush party positions all the time. A machine gun was then brought into action at Police Barracks and trained on the street. Firing from this lasted for about 15 or 20 minutes. Ambush party then decided to retreat as their equipment did not give them much hope of doing anything better.

At 8 pm the I.R.A. parties emerged from the occupied houses. Ben O’Sullivan’s section marched down the street in the direction of Newcastle West, the riflemen in Egan’s Pub covering their retreat. They were joined afterwards by Con Foley’s section and later that night, they all dispersed to their own company areas. The I.R.A. ambush party were without casualty, with the count on the R.I.C. side of one dead and two wounded. On that Saturday night residents of Dromcollogher experienced a great feeling of uneasiness and an air of tension and fear prevailed.

It was the usual experience that wherever an ambush occurred, the Crown Forces, notably Black and Tans or Auxiliaries arrived and wreaked havoc on person and property. Prior to the ambush all roads leading to the town were blocked by felled trees and thus their arrival would be somewhat delayed. When darkness fell Very Lights (distress flares/signals) were sent out from the local Barrack. Prominent supporters of Sinn Fein as well as many local residents evacuated their homes and spent the night in the homes of their country friends. At about 3 a.m. British reinforcements arrived.

They immediately knocked at every house in the town and ordered all able male inhabitants to proceed to the Square. Here they made a careful scrutiny and selected the most able bodied, placed them on army tenders and proceeded to where the road blocks were erected. They supplied them with the necessary implements and compelled them to cut the trees and clear the roads.

About a week passed without incident and life returned to normal, and the townspeople thought that they had escaped any further retaliation. There was a rude awakening however, when about ten days afterwards a force of about 100 soldiers arrived under an aggressive officer, a Major Peck, who produced an order authorising him to carry out “official reprisals”. A young lieutenant instructed “master” O’Callaghan not to allow the school children out for lunch.

They proceeded to Murray’s Drapery (Michael Murray was missing). They gave Mrs. Murray a half hour of notice to evacuate herself and her staff and take with them only a few personal belongings. They then put a mine in the house and exploded it from under Noonan’s Arch. The Square was strewn with rubble, broken glass and drapery goods, but the military engineers certainly knew their job, since they completely demolished Murrays and did very little damage to the adjoining houses. They next proceeded to the drapery store of Murrays at Kiely’s Boreen where they blew up the storehouse.

They continued on their work of reprisal and destroyed the houses of Eoin O’Sulllivan, Coolygorman, Broadford, an I.R.A. officer and on the run and John Quaid, a Sinn Fein court judge. They were unable to locate the home of Mark O’Shea, Ballinlongig (his son, Tim, was local I.R.A. captain and on the run). They returned the following day however and having found the house, they burned it down. The overall punishment for the ambush was the destruction of six houses.

The man who died was an RIC constable from Co Roscommon. Thomas Bridges was born on May 23,1899 to Thomas and Rebecca Bridges, Behy, Knockvicar, Boyle, Co Roscommon. He was the youngest of seven children. His three brothers were John, William and James, and his three sisters were Frances, Emily and Rebecca. RIC Constable number 69992 Thomas Bridges had had one year police service having been a farmer before joining the RIC. Thomas Bridges is buried at Ardcarne, Co Roscommon, and was a week short of his 22nd birthday when he lost his life at 6.15pm on the evening of Saturday, May 14, 1921 in the Dromcollogher Ambush.

This account of the Dromcollogher Ambush is an extract from the, soon to be launched, Dromcollogher Heritage Trail in which the details have been drawn from numerous sources, mainly witness statements.