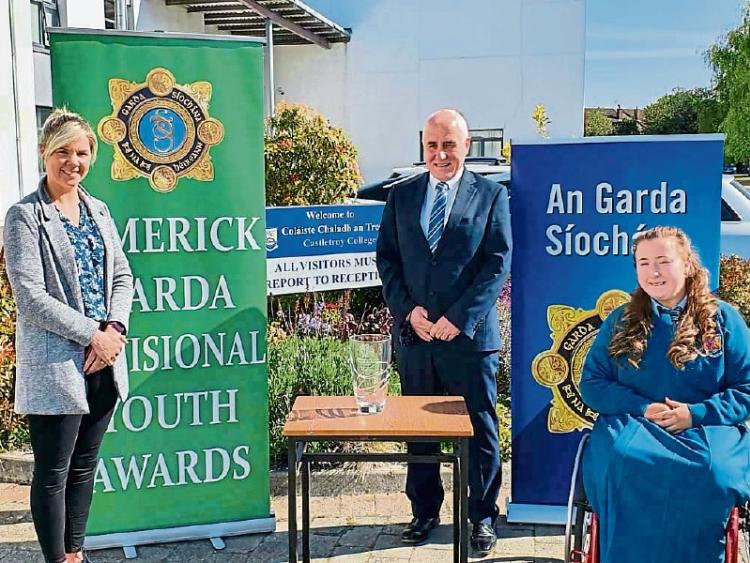 INSPIRATIONAL teenager Amy Mulcahy who sustained life-changing injuries in a boating accident in 2019 has been a presented with a Limerick Garda Youth Award in recognition of her resilience and determination.

The Castletroy College student was one of eight award recipients at the seventh annual awards ceremony which took place virtually because of Covid.

Sponsored by the Garvey Group, which has stores in Corbally, Adare and Newcastle West, the awards aim to honour young people – aged between 13 and 21 - who have made a significant contribution to their local community.

“As a result of Covid-19, the past year has been difficult for us all and occasions such as the Limerick Garda Divisional Youth Awards are a reminder of the positive  engagement (with young people) and the work that takes place,” said Chief Superintendent Gerard Roche.

“By hosting this virtual event, we want to encourage and remind our young people that their continuing efforts are appreciated and valued by us, their peers, volunteer networks they are part of and their teachers,” he added.

Mayor of the city and county of Limerick, Cllr Michael Collins, said it’s heartwarming to see young people being acknowledged for their contributions to their local communities.

“The Limerick Garda Youth Awards celebrate and honour young people who have helped to create better communities, overcome difficulties in their lives and  display exceptionally courage and bravery. You are the future and given what you have achieved already, in your short few years, we are in very safe hands here in Limerick,” he said.

“You should be very proud of your achievements. Our young people are very special and you deserve to be honoured, you have looked out into your communities and thought ‘what can I do to make a difference?’ You have worked tirelessly to help others and in doing so you have helped yourselves,” he added.

Assistant Commissioner Michael Finn, who has responsibility for the Southern Garda Region, also attended the virtual awards ceremony which was organised by the Garda Juvenile Liaison Office at Mayorstone garda station.