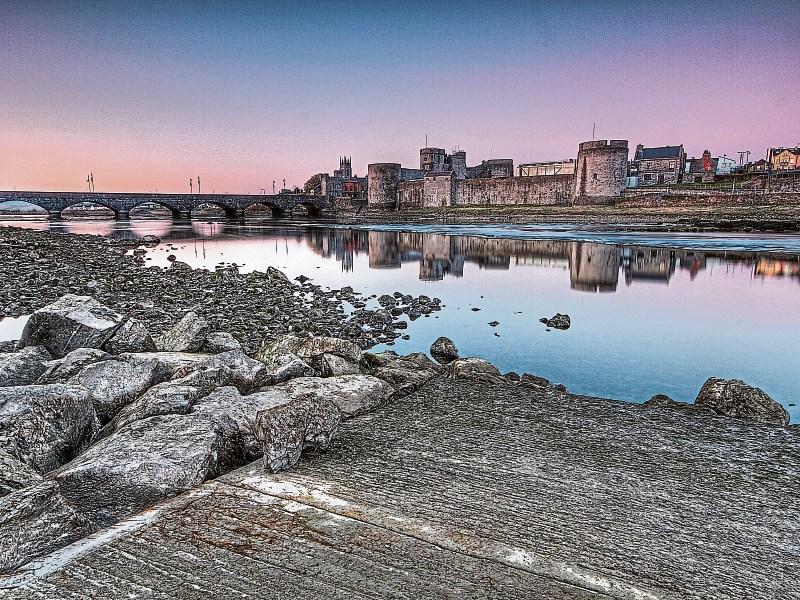 PATRICK Collison has hit back at a controversial article on Limerick, which suggested he and his brother had "escaped" the city.

There has been a volley of criticism this Friday evening across social media over the article on the business magazine's web site, which contained what Mayor Michael Collins described as a "number of slurs" about the Treaty City.

OPW Minister and local TD Patrick O'Donovan has also called on Forbes and writer Stephen McBride to apologise for the article, and has invited them to Limerick "where I will gladly set the record straight in respect of what our city and county has to offer".

Mayor Collins will make a formal complaint to the magazine, while Limerick City and County Council has already, it's understood, written to express its misgivings to the publication itself following on from the story, published online this evening.

Council communications boss Laura Ryan has attempted to reach out to Mr McBride over Twitter.

After former Limerick Leader journalist Petula Martyn, now a business correspondent with RTE, mentioned the Collison brothers through their personal Twitter accounts, the elder brother Patrick wrote: "Not only mistaken about Limerick but the idea of "overcoming" anything is crazy. We are who we are *because* we grew up where we did."

In a separate, earlier Tweet, John described the article as simply "daft". Both brothers also 'liked' a number of other tweets which were supportive of Shannonside.

Ms Martyn had described the Forbes article as "scurrilous, defamatory and disappointing".

Not only mistaken about Limerick but the idea of "overcoming" anything is crazy. We are who we are *because* we grew up where we did.

The story, since removed from the Forbes web site, about the pair who set up multi-billion dollar payments firm Stripe, was initially headlined: 'How Two Brothers Escaped ‘Stab City’ And Made $11 Billion'

It was later amended to 'How two brothers escaped Limerick and made $11bn'.

But the remainder of the story perpetuates a number of other stereotypes of Limerick, including a false claim that it's known as Europe's "murder capital".

"A couple of years back, a gang feud turned Limerick into a warzone. Shootings, pipe bomb attacks, and stabbings happened nightly. Some bad neighborhoods [sic] are even walled off by a dirty, graffitied 10-foot-high concrete barrier, like the Berlin Wall. It’s the kind of place, as my grandfather says, “Where even the German Shepherds walk around in pairs," the writer added.

I am calling on @Forbes and @DisruptionHedge to come to Limerick where I will gladly set the record straight in respect of what our County and City has to offer as opposed to what your work of fiction depicts. Please let me know when suits to visit. ⚪️ #luimneachabu

.@Forbes disgraceful description of #Limerick home to so many fine and decent people. Also home to so many high end multi national companies. Trash ill-informed journalism at it best. pic.twitter.com/xhwiVXEQqU

In fact, many of Limerick's former gangland kingpins are behind bars, which has resulted in a drop in the crime rate in the city.

Shocking journalism by @forbes casting such a slur on our beautiful vibrant, successful and positive City @Limerick_ie. We are very proud of the Collison Bros @patrickc & @collision and what they have achieved. @forbes need to apologise. https://t.co/7UK3Mbm1zz

Despite this, Mr McBride added: "Limerick is the last place you want your kids growing up. But two brothers who went to high school there recently beat the odds. Not only did they escape “stab city”—they moved to Silicon Valley, founded one of the most disruptive companies on earth, and became two of the youngest self-made billionaires in history. At barely 30 years old, Patrick and John Collison are now worth $11 billion each.”

There has been a fierce reaction from across Limerick, with Mayor Collins saying a council contact is in progress, and he will officially write a letter of complaint to the publication on Monday.

"It's not right that an ill informed journalist can damage a city that has achieved so much on many levels in recent years. I'm shocked at what was printed. We are very proud of the Collison brothers in Limerick. I'm sure they won't be happy at what has been printed about their home place," he added, describing the article as "full of slurs".

Fine Gael TD Kieran O'Donnell also called on Forbes to issue an immediate retraction and apology on its "disgraceful, baseless and inaccurate reflection" of Limerick.

"Very shoddy and poor journalism and an insult to our city and its people," said the TD.

His party colleague, Cllr Daniel Butler described the article as "the most vile piece of rubbish", and has resurrected his #LimerickandProud hashtag which he first began using in the wake of a controversial TV3 documentary in 2015 which was critical of the city.

As a result, many people have posted pictures of Limerick with this hashtag in a bid to have it trending on Twitter.

Sinn Fein TD Maurice Quinlivan said: "The guy obviously has never been in Limerick - the article references Uber who actually operate a large base in the centre of the city and when arrived said “the majority of our employees are local, which speaks to the wealth of talent in the greater #Limerick area."

Rugby star Keith Earls, who was raised in Moyross, took to Instagram, where he said: "the wall didn't look too bad to me". 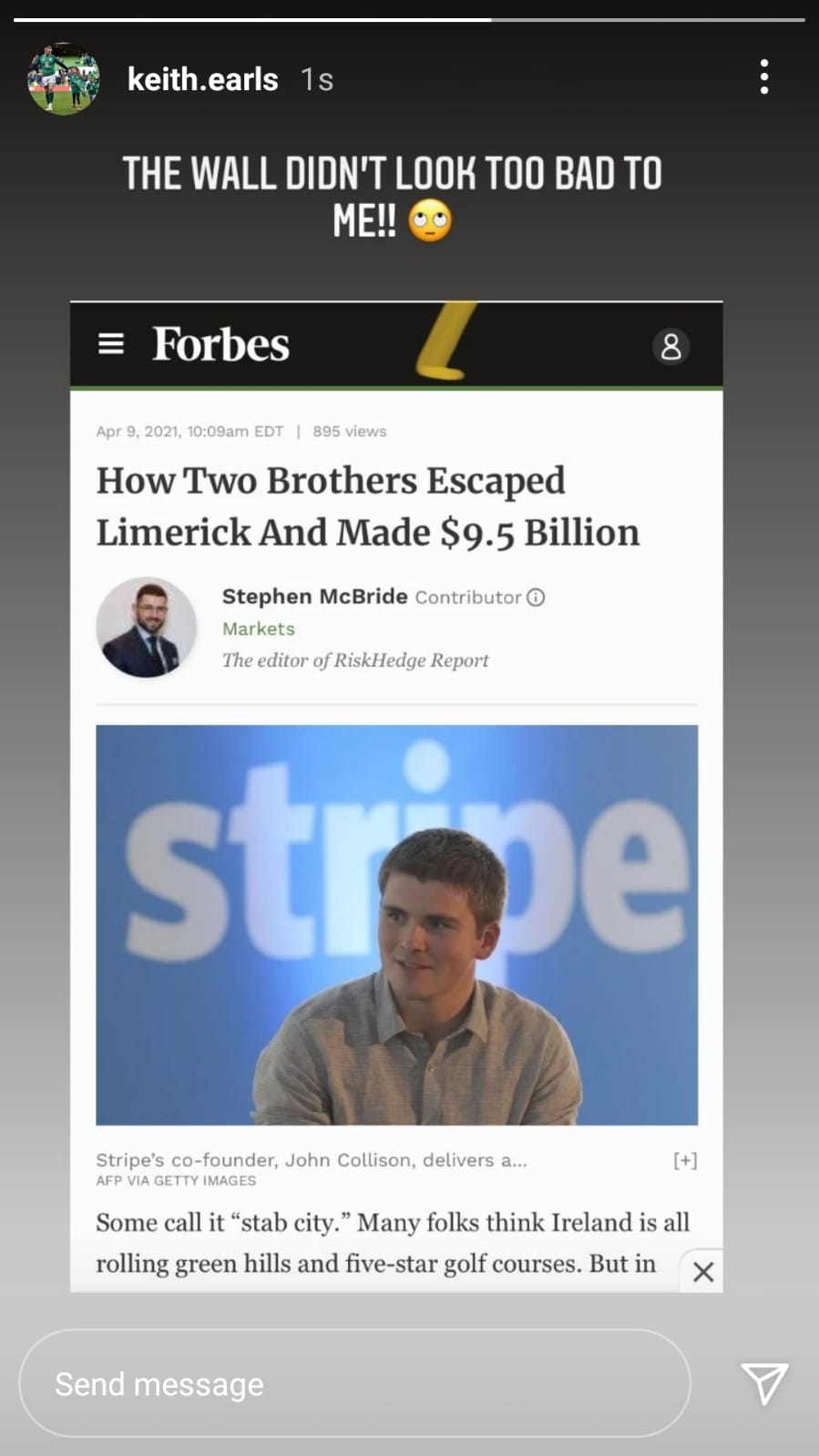 Founded in 1917 and based in New Jersey, Forbes Magazine is generally considered to be a well-respected business publication, with a six-figure circulation.

I am calling on @Forbes to issue an immediate retraction & apology on disgraceful, baseless & inaccurate reflection of #Limerick City in article by Stephen McBride @DisruptionHedge on brilliant Collison brothers-very shoddy & poor journalism & an insult to our City & its people pic.twitter.com/Fz7nE0L0cM

The guy obviously has never been in #Limerick - the article references #UBER who actually operate a large base in the centre of the city and when arrived said of “The majority of our employees are local, which speaks to the wealth of talent in the greater #Limerick area” https://t.co/No9pIb2Wi5

This is the most vile piece of rubbish written about #Limerick that I have ever seen. This has me absolutely furious at this lazy ill informed attempt at reporting. @forbes how did this piece from @DisruptionHedge pass your editorial team? This is bigotry! pic.twitter.com/NqnOJV0lwT

Look at this absolute drivel. Must be high in the running for the worst piece ever published by @Forbes. And it gets even worse after the intro. Embarrassing pic.twitter.com/aEbiKPGN0P