Down Memory Lane! Jim’s shop - gone but not forgotten! 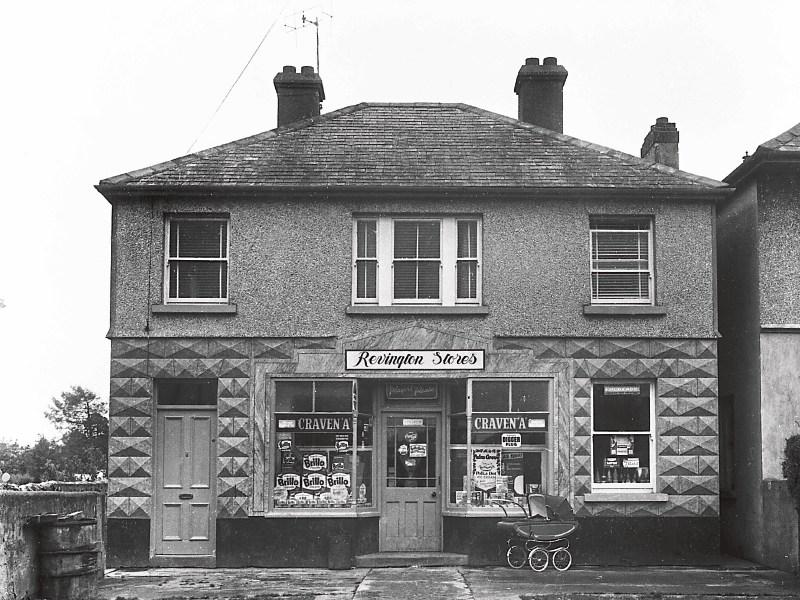 Revington Stores, or Jim’s Shop as it was known locally, sold everything you could ever need Picture: Courtesy of Sean Curtin

We came to live in our new home on the North Circular Road with our little baby daughter in the mid ‘70s. Although we were not aware of it at the time, we soon realised that our choice of location was really ideal.

Revington Stores as it was then known was located on the North Circular Road just across the road from Fort Mary Park. Directly beside it on the left was a laneway leading through Sunville and on to the lower North Circular Road. It was for pedestrians only.

Thinking about it now, I am instantly visualising Mr and Mrs Byrne within and of course their son Jim. Mr and Mrs Byrne were very welcoming to new families as we soon discovered, not nosy or inquisitive, just warm and friendly. Being new to the area and to the county, we often had to ask for guidance about finding places or people, Mr Byrne was the “go-to person”.

The shop was well stocked with groceries, in fact, you could say that every basic item that one needed for everyday living was available in the store. Milk delivery to homes in glass bottles was still in vogue at this time. However, Mr Byrne always had extra supplies for late night callers.

Memories of Jim’s shop are manifold. One autumn day I happened to be in the shop when a little boy of seven years old, that afternoon in JFK uniform, and seeing Jim was busy, walked directly up to Mr Byrne. He earnestly explained that he lived in the area, that his mother was not yet home and requested a bar of fruit and nut chocolate be charged to his mother’s account. Mr Byrne’s face was a picture to behold, he smiled benignly, he reached into the shelf and produced the requested item. No checking account books for verification. Such a wonderful human being, always serene and blessed with inner peace. The young recipient thanked him and told him he would eat it in the garden and wait for his mother.

The following personal family details were kindly provided to me by Mr Byrne’s son Brian, a retired dental surgeon and his wife Mercedes who live in Limerick City. John Ignatius Byrne AKA Jack was born in Camolin, Co. Wexford. He was from a family of seven children, one sadly died at birth. Jack’s mother also died when he was very young. His wife Nora (nee O’Brien) came from Bruree.

When asked about how they met, he would only say that it was “love at first sight”. Jack Byrne was a member of An Garda Siochana. On his retirement from the force, his first entry into the retail business was to acquire the Regional Store across the road from the Regional Hospital, Dooradoyle. Bank of Ireland bought the store from him in 1950.

His next foray into retail was to purchase what was then known as Ashbourne Stores, which soon became Revington Stores. Revington stores was well stocked with groceries - you could say that every basic item that one needed for everyday living was available in the store.

There was a working till in the store, but it was seldom used by Mr Byrne. He had a very clear and active mind. Customers could order several items and he being a wizard at mental arithmetic would calculate the total with precision and without hesitation. He radiated warmth and welcome and one always felt better after an encounter with him.

On occasion if Mrs Byrne were in the shop, she would take the orders and he would package the goods. Sometimes she would be in the shop just to keep him company. There was always a lull at some stage during the day and Mrs Byrne and would stay in the shop and enjoy the interactions with the customers.

Jim, their son was of course in the shop too, always helpful, friendly but at that stage, his dad was the ‘main man’. Jim had all the friendly manners and kindness of his dad. He was more than helpful to customers and always had a little news item or a joke to share. He was especially kind to children and never allowed any form of bullying, and if it happened the culprit would have to leave the shop for a certain period and in order to be allowed back would have to come and apologise to be reinstated. The atmosphere in the store was always warm and friendly. People came to get groceries, items for school outings, magazines, some children raced home for lunch and collected goodies for apres school and sporting fixtures.

The Byrne family were very well liked and respected in the area. People would call to the store to get news of deaths, funeral times, births and weddings. People felt that any of the Byrne family would be able to answer any question that was put to them.

The flow of the day followed a very definite routine. After the morning rush at 9.30am without fail one could expect to find two gentleman of note, Mr Gaffney who lived on the North Circular Road at his home called Shamrockville. His spacious home and garden were quite unique in the area. His lawn had several headstones where his pets were buried. He had a very unique style in apparel. He always wore tweed plus fours and was a member of the legal profession.

Ted Russell, his close friend would arrive at the agreed time. He would have walked home from the city after attending early morning Mass. Mr Russell’s home was on the North Circular Road also, a white house just across from Barrington’s Pier. The two homes were separated by Villiers school. These two gentlemen were long-term best friends, they would hold court in the shop having their chat.

Mr Russell was a very benevolent man and he and his family were feted for their generosity of spirit. He was an elected mayor on several occasions, alderman on five occasions, he was a senator and elected as a TD. He was a member of the City Council from 1942-1979. He was a gentle and dignified man and his prowess in business and cultural life greatly enhanced the image of the city and county. He worked tirelessly and for the good of other people and never sought publicity. Prior to his death in 2004, he made a very generous donation of the park at Barrington’s Pier to the people of Limerick City.

To meet him on his daily visits to Jim’s shop was a real treat. Mr Byrne was in his element having them there, hearing and taking part in their banter. He considered their visit the best start to his day. These two gentlemen never sought acclaim, their presence and their joviality cheered and uplifted people. Jim of course would be present too, but he was busy stocking shelves and serving parents and children with goodies for outings and more basic provision. Mr Byrne had a very calm and benevolent disposition, as did his son Jim. His dad at this stage was stepping back from the No.1 position and Jim was happily taking over the reins.

Meanwhile, a developer had been active in the area, anxious to acquire land for development. The developer sought to purchase half the back gardens adjacent to the shop. Twelve owners including Jim’s shop sold half their back gardens and one owner to the left of the laneway also sold. I sadly witnessed the dismantling of Jim’s Shop in the autumn of 2009. It was a very emotional day. I managed to get a roof slate from the demolition crew.

A new developer took over the stalled building. A point to note is that Jim’s shop is forever in our memories. The site of Jim’s shop itself has not been built on and is a green velvet lawn. The slate I have in my garage is a cherished souvenir of its existence. Seeing the large billboard where Jim’s shop used to stand, I felt obliged to put pen to paper and give an insight into precious memories of a bygone era.

The houses are now finished and available for sale, the new address, Revington Gardens.