Leamy in Focus! Life and times of little-known Limerick benefactor 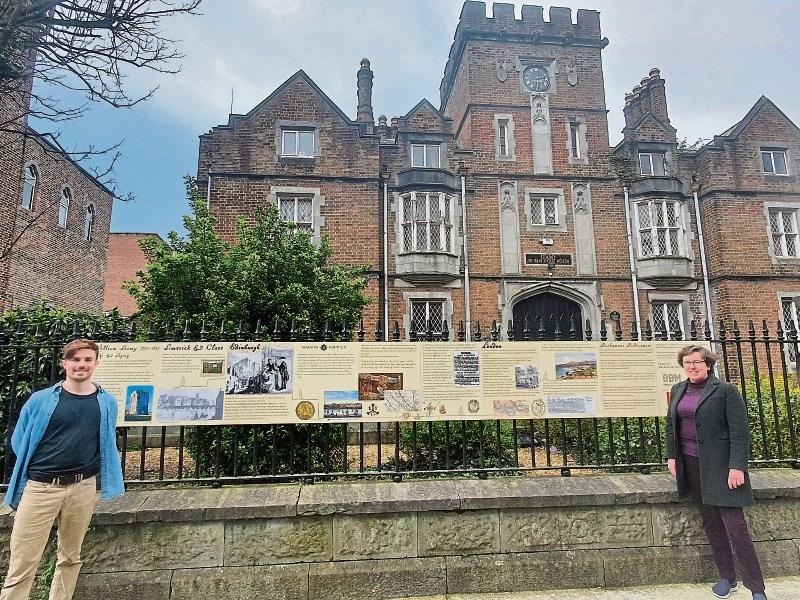 Pictured at the panels outside the former Leamy school in Hartstonge Street are designer Fionán Coughlan and Julie Long of printers GBM. Academic Dr Paul O’Brien put together the wording

UTTER the words the Leamy School to many people in Limerick city and they will inevitably reference Frank McCourt, the landmark Tudor building in Hartstonge Street synonymous with the author.

They’re less likely to be able to tell you about William Leamy, the generous benefactor whose financial legacy built the school in the early 19th century.

Until now that is.

That’s because Mary Immaculate College academic Dr Paul O’Brien, designer Fionán Coughlan and printer Julie Long of GBM Limerick have brought the life and times of Leamy to some bright, attractive boards on the railings outside the building bearing his name.

Born at Beagh Castle in Pallaskenry in 1750, Leamy was the son of a herdsman and had at least one brother Patrick, a property developer in the city.

In his last will and testament, he left the majority of his fortune towards the construction of a school for the poor children of Limerick.

Dr O’Brien said: “William appears to have been taken under the care of his father’s employer, the wealthy landowner Ralph Westropp of Mary’s Fort House in Tulla. William’s good fortune in receiving an education must have informed his decision to establish a school for the education of the children of the poor of Ireland, principally those in and about the city of Limerick.”

The plan to recognise Leamy outside his building was shared – as many great ideas are – over a cup of coffee.

Ms Long said: “Myself, Paul and Fionán got together. Paul told the story, we engaged with it.”

Putting the panels together took six months of studious work on the part of Dr O’Brien with public records of Leamy’s life difficult to some by.

But it was worth the time and effort, with Ms Long describing Mr Coughlan’s design as “simply delicious!”.

“This is the story of a man whose story has not been told thus far. Everybody knows the name Leamy, but nobody knows who the man actually is. As it transpires, he was fascinating. He lived in a time well before the famine, which is as far back as our consciousness and awareness goes. He is nearly pre-oral history. It’s a lovely way to bring someone who is from the turn of the century before last back into town,” said Ms Long.

An outdoor attraction is even more appropriate in the Covid-19 times we live in, with people being encouraged to enjoy the fresh air, and remain socially distanced – especially with summer on the way.

Leamy was a very well travelled individual, according to Dr O’Brien.

Taking up the story, he said: “After a brief stint in Edinburgh, Leamy travelled to India in 1790. Initially he carried on as a merchant in Madras. Leamy’s business endeavours in Madras and Calcutta are documented in the contemporary period. Several newspaper notices describe him as a trader of tea. In 1792, Leamy placed a notice in the Madras Courier informing ‘the ladies and gentlemen of this settlement that the usual China articles are available’.

“Leamy’s ability to establish successful trade routes so soon after his arrival in the country suggests he was possessed of considerable business acumen, especially in the context of a crowded market,” he added.

Making his fortune in India, Leamy then headed back West in 1803 taking a house in a fashionable area of London. Little is known of his time here, aside from a chance encounter with someone from Tulla, which resulted in his reunion with his family and friends.

He moved to Lisbon, where he passed away in 1815 – but directed the building of the school in Limerick in his last will and testament.

He was given a design brief by Julie Long, and he admits it took “a bit of head-scratching” to get right.

“But it came together, because I was able to bounce ideas off Julie and Paul, and it was great. It was fun, enjoyable, and we did it together. It’s been a great project to work on – a real collaboration,” said the Corbally man, who now lives in the King’s Island.

He has paid tribute to Limerick City Build, which funded the material costs of the project, as well as Dr O’Brien for his “Trojan” work.

Ms Long added: “It’s something that people can read or engage with as they go past. It’s a really nice way to make people smile on their way to work, or going to wherever they need to be.”

For her company, it was a case of giving back to Limerick, with GBM one of the mainstays of the local economy – and also based just metres away in Lower Hartstonge Street.

“We are still open because of Limerick, because of the support we’ve built up over the last 50 years. We wouldn’t be here if it wasn’t for the people of Limerick, and we are aware of that. Sometimes you have to do stuff which is just nice,” she said.

Watch out for more projects of this nature coming on stream through the summer, she added.

Although William Leamy lived more than two centuries ago, the lessons and morals remain true to this day, Dr O’Brien believes.

“The Leamy School is a reminder that access to an education is a fundamental right, regardless of ones background,” he concluded.