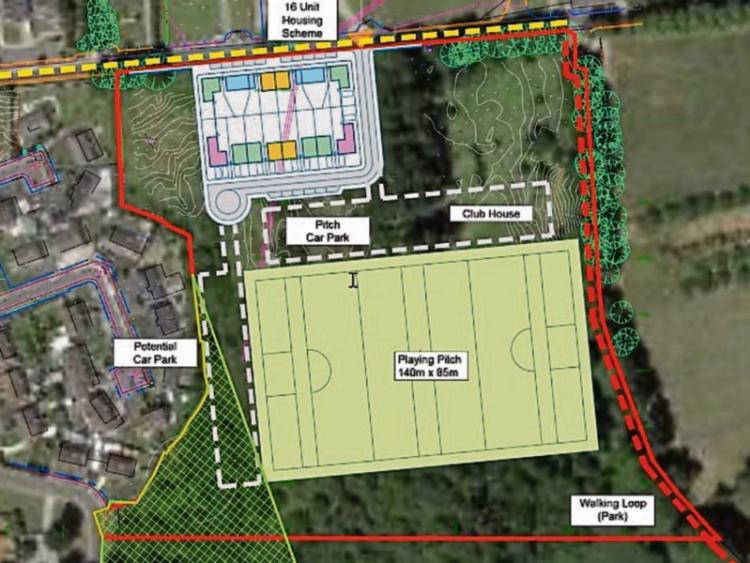 Limerick City and County Council agreed to modify the original proposal, as pictured

MORE than 30 acres of land are to be transferred to Pallaskenry Community Development Association after agreement was reached with Limerick City and County Council.

Concerns had been expressed after the local authority indicated it is to retain a parcel of land, within the overall site, with the intention of building 16 social houses.

At a special meeting of the Adare/Rathkeale Municipal District, Gerard O’Sullivan, a member of Pallaskenry Community Development Association, said the committee was disappointed when it saw the initial proposal earlier this month.

“It looked more like a desk study rather than an actual representation of what the land is,” he told the virtual meeting.

Mr O’Sullivan said the land that had been earmarked as the location for the sports field was not suitable and “it falls away way too much.”

However, he confirmed that following engagement with council officials a compromise had been reached.

“If it is the case that the council has to retain a parcel of land for future housing needs what we asked was that the housing units would be moved to the left (of the proposed location) and tucked up against the boundary close to Cluain Mhuire and then our pitch could be reconfigured,” he said.

Aoife Duke, Director of Service for Housing Development, confirmed the proposal was acceptable to the council and that formal drawings would be prepared.

Around 3.8 acres will be retained with the remainder of the lands being transferred to Pallaskenry Community Development Association which plans to develop a pitch, walkway and biodiversity park.

Ms Duke reiterated her previous commitment to councillors that no social housing will be developed until “at least 2026”.