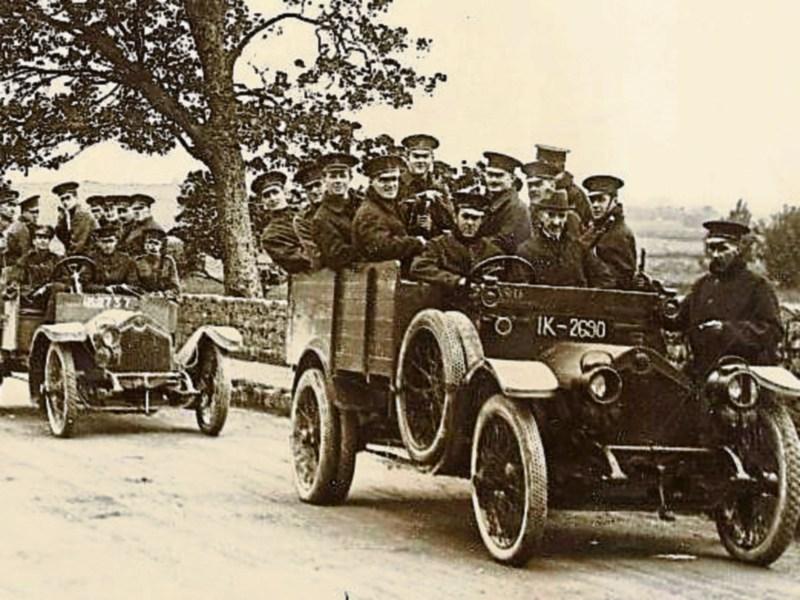 Two Crossley Tenders belonging to the former Royal Irish Constabulary, which was the focal point of the Dromkeen Ambush of 1921

Ireland’s War of Independence commenced in January 1919 and ceased on July 11, 1921 when both sides agreed a ceasefire and truce. During these times there were many ambushes throughout Ireland in our quest for freedom.

The Soloheadbeg ambush took place eight kilometres outside of Tipperary town on January 21, 1919. It is acknowledged as the commencement of the War of Independence. Two Irish Catholic Royal Irish Constabulary (RIC) officers were killed and their weapons and the explosives they were escorting were captured. The volunteers – or Irish Republican Army (IRA) – were led by Seamus Robinson, Dan Breen, Sean Treacy, and Sean Hogan, known locally as ‘the big four’ .

There was a lot of sympathy in Tipperary for the two Royal Irish Constabulary officers that were killed. Constable McDonnell aged 56 was a widower and left seven orphaned children and Patrick O’Connell was 36 and was engaged to be married. The death of these two men was unfortunate and not planned but they were killed in the ambush. One of the officers was a fluent Irish speaker. This event lit the torch for Irish freedom and inspired many other ambushes throughout the country over the next two years.

The execution of the 1916 leaders was a calamitous mistake and greatly impacted public opinion. Sinn Fein and Catholic Bishops campaigned against conscription and joining the British Army in early 1918 and the public support gathered greatly for the party.

In the general election of 1918, which was a 32-county one, Sinn Fein won 73 out of 105 The British government were to make a further blunder when Winston Churchill as Secretary for War on March 25, 1920 decided to send the Black and Tans to Ireland in an effort to defeat the Irish volunteers/IRA.

Recruitment began in Britain in January 1920 and about 10,000 men enlisted during the conflict. The vast majority were unemployed former soldiers from Britain who fought in the First World War, although some were from Ireland.

Sadly these were undisciplined and poorly trained soldiers who alienated the Irish people and severely damaged the reputation of the British army for decades to come. They adopted a shoot to kill policy and terrorised the countryside in their vain efforts to defeat the Irish volunteers.

The Black and Tans gained a reputation for police brutality and became notorious for reprisal attacks on civilians and civilian property, including extra-judicial killings, arson and looting. Their actions further swayed Irish public opinion against British rule; their actions incited condemnation in Britain as well.

To this day the term ‘Black and Tan’  is used most derogatively and is immortalised in the famous Wolfe Tone ballad Come Out Ye Black and Tans.

On December 26, 1920 over 200 county Limerick people attended a fund raiser dance for the volunteers in Caherguillamore House three miles outside Bruff. In hindsight it was foolish for so many volunteers to attend the one event. The house was raided just after midnight by over a hundred black and tan and RIC officers. A gun battle ensued with five Irish volunteers killed and over a hundred captured. The black and tans savagely beat their prisoners and humiliated them.

The events were to inspire the Limerick flying columns to plan their own ambush near Dromkeen, on the road into Dromkeen from Fedamore. Donnacadh O’Hannigan was head of the East Limerick Brigade and overall in charge of the ambush. He was a farmer’s son from a small farm between Angelsboro and Mitchelstown.

He is credited with the idea of the flying column which Michael Collins ordered all organisations throughout the country to emulate. The O’Dwyer brothers Nicholas and Ged from Bruff were members of the East Limerick flying column. Richard O’Connell from Caherconlish was commander of the Mid-Limerick flying column and was an uncle through marriage of the recently deceased former Fine Gael TD and Minister Tom O’Donnell.

The ambush was a joint venture with the two Limerick flying columns and much planning went into the event. Local volunteers had noticed the convoy of two Crossley Tenders (lorries) from Pallas RIC headquarters regularly driven to Fedamore delivering the Constable’s wages and returning by the same route. The ambush of the RIC Convoy was planned for February 3, 1921.

The ambush was a success with 11 RIC men and Black and Tans were killed and their rifles captured. There was only one volunteer wounded on that day. Liam Hayes from Ballinlough, Kilteely who lost a finger and part of his thumb on his left hand at the end of the ambush, most likely shot by a volunteer on the opposite side of the road.

Liam Hayes was a farmer’s son aged 28 at the time of the ambush and went on to play a significant role in the Civil War in Limerick as an officer in the Free State army. He served as a Sinn Fein TD for Limerick in the second and third Dáil but did not contest the next election in 1923 as he decided to pursue his career in the Irish Army. He was Officer Commanding, O.C. of the Military College in the Curragh from 1928-30 and O.C. the Army Equitation School Mc Kee Barracks from June 1930 on. He purchased many of the Irish Army show jumping horses including Limerick Lace made famous by Major Jed O’ Dwyer in the 1930s. He remained life long friends with John Joe (J.J.) O’Brien, Dan Breen, Dick O’Connell and Jed O’Dwyer. There was always a spare bed in his house for anyone travelling to Dublin from Limerick.

Interestingly Dan Breen and Dan Grace and many of Liam Hayes comrades fought against the Treaty in the Civil War but that was all forgotten once that war ended, what was more important was the War of Independence. He retired from the Irish army in 1943 as a Major General and became Chairman of the National Stud in 1947. He was my maternal grandfather.

Shortly after the Dromkeen Ambush the Black and Tans burnt the family homes of Liam Hayes Kilteely , Richard O’Connell, Mackeys and Carroll’s near Dromkeen and Buckley’s in Corelish.

They also burned homes in Ballybricken and Cappamore. So not only did the volunteers who were on the run make sacrifices but in many cases their families suffered greatly during the War of Independence. In February 2009 a memorial was unveiled at the site of the ambush near Dromkeen to commemorate the volunteers involved.