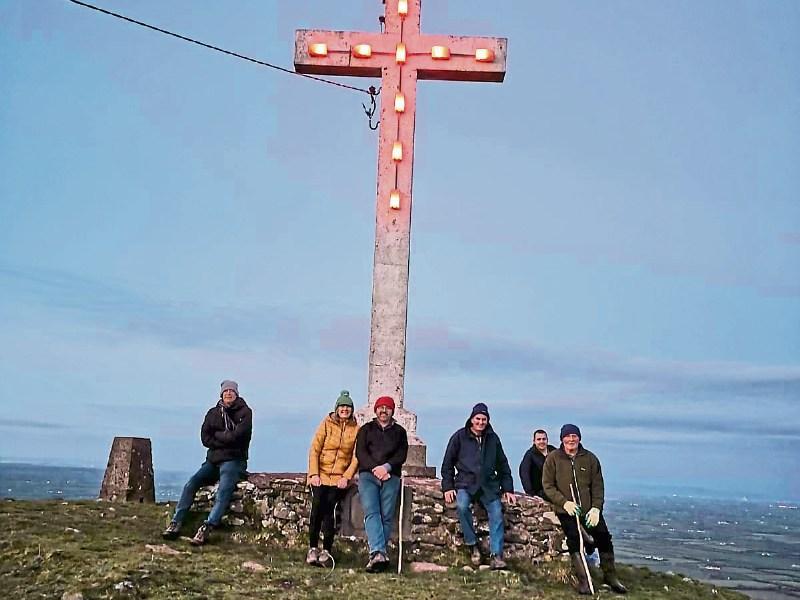 TIMES might be tough now but as a reminder of darker times and a beacon of hope for the future then look no further than Knockfierna.

A lot of people died of starvation on the hill during the famine years. One hundred years later a cross was built on the top though pure grit and determination. The lights on the cross haven’t been working for around a decade but before Christmas they shone again. Those in the vicinity of Knockfierna only have to look to the heavens at night to see the light in the sky.

Tim Noonan, of Knockfierna Heritage Society, said the cross was built in 1950 to commemorate the holy year.

“It was constructed by local volunteers from the parish of Granagh and Ballingarry. A committee was formed and one person from each household was invited to volunteer. It took the month of November to complete, which was all done by manual labour.

“First the foundation had to be dug eight foot deep with a pick and shovel. All the material had to be brought to the base of the hill by tractor and trailer. It was then loaded onto a type of slay that was pulled by a horse. This slay was made by local blacksmiths with two shafts so it could be pulled by a horse,” said Tim.

All the materials needed had to be pulled up the hill in small loads so the horse could pull it. Once the foundation was dug a concrete base was poured, mixed with shovels of equal size so the ratio of cement to gravel could be measured.

“Steel reinforcing bars had to come up out of the foundation in the shape of the cross. The scaffolding was erected around the steel then the timber shuttering had to be clamped, propped and plumed. When all that was done it was ready for concrete. Credit has to be given to all involved for the many hours of hard work at the top of the hill in winter conditions,” said Tim. Truly, it was a labour of love.

In 1952, the cross was electrified. Again, voluntary labour pulled the poles up the hill with horses owned by local farmers and then dug the holes for the poles. The ESB electrified the cross.

On behalf of Knockfierna Heritage Society, Tim would like to thank the ESB for helping to get the lights working again before Christmas after around a decade, as well as the local land owner and electrician. Tim says numbers climbing Knockfierna have increased with many saying a prayer at the cross.

“It’s a place of peace and tranquility where people can get away from the stress of modern day living. When you get to the top of Knockfierna you can sit at the base of the cross in awe and say to yourself, ‘This is Gods County’,” said Tim.

He said Knockfierna Heritage Society is made up of a very small number of members who are mostly pensioners.

“We welcome new members to our group so they can help us to improve this commonage hill so everyone can enjoy the place. A lot of people died of starvation on this hill during the famine years, we owe it to these people as a mark of respect to protect this commonage land in their memory,” concluded Tim.

Not to mention its importance in these Covid times as many have discovered this previously hidden gem for the first time.